All Fall Down, by Sally Nicholls: reviewed by Sue Purkiss 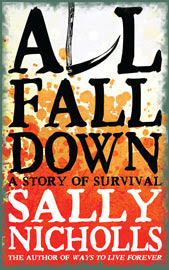 All Fall Down is subtitled A Story of Survival, and the event which our heroine, a thirteen year-old girl called Isabel, has to survive is a truly formidable one: the Black Death of 1349, the deadliest plague in human history. In Sally Nicholls' helpful historical note, she points out that: '...the First World War - the worst disaster Britain has suffered in living memory - killed around 1.55% of the British population. The most recent estimates put the victims of the Black Death at around 45%.'

It's a chilling comparison, and Sally's novel explores in .rich detail what it was like to live through that time - or indeed to die during it: she doesn't flinch from detailed accounts of the exact ways in which the three different forms of plague ravaged their victims.

The novel begins with an introduction from Isabel, in which she looks back to the year the plague came: 'We knew then that 1349 would be terrible. But nobody could have imagined quite how terrible it was going to be.' (So we do know that Isabel herself will survive.) After that, the story is told in the present tense. It begins on an ordinary day, a beautiful June morning: by the end of the morning, and the end of the chapter, the villagers have heard that the plague is close by. We meet Isabel's family as they awake: her much-loved stepmother Alice, her baby brother Edmund, nine year-old Ned, and little Margaret. There are two older brothers: Richard, who is married, and Isabel's favourite brother, Geoffrey, who is in a monastery. Her father is relatively well to do, but he still belongs to his lord, and has to work his land as well as his own. Sally easily sketches a picture of a hierarchical society where everyone knows his or her place and is confined to it.

She's also very good at creating a vivid picture of how this world looks, how it works: 'Father built our solar, a triangular loft space under the roof of our house. It's almost exactly the right size for our mattress, which is made of sacking stuffed with hay...' Much later in the book, when Isabel finds herself in a wealthy man's house and is told she can wear his dead daughter's dresses, we hear that she cannot put them on because she has no-one to help her, and it's impossible to tie all the fastenings by herself. This kind of detail makes a far distant world very real, almost tangible; we can absolutely imagine what it would be like to live in it.

She makes us see too how closely the lives of the villagers are bound up with the rhythm of the seasons; and so we see how appalling it is, how unnatural, when the crops are ready in the fields, yet there are not enough people left to harvest them. And towards the end of the book, when the plague has almost run its course, it is easily understandable that the effects of the disaster on society will be profound. The plague cut a swathe through noblemen just as much as it did though the poor: some estates were left without a lord, and none had enough workers to keep the estates going. So power shifted: instead of having no choice but to work for someone else, workers could sell their labour. Land became cheap, and men of enterprise - like Isabel's brother Richard - could lay the foundation for a new, more prosperous way of life: at the cost, however, of desperate human tragedies: t the beginning of the book, Sally quotes from someone who lived through the plague, Agnolo di Tura: 'I buried with my own hands five of my children in a single grave... No bells. No tears. This is the end of the world.'

It makes some of the recently manufactured dystopias seem a little frivolous. Why create an imagined world of stunted survivors of a terrible catastrophe, when if we look back, we can see a real one?

This is a very powerful novel. I particularly like the fact that it explores the lives of ordinary people - historical fiction so often concerns itself with the doing of the great, and fascinating as these are, the reality is that if we had lived in the medieval world, most of us would have been in the shoes of Isabel and her family. Sally Nicholls shows us exactly how this would have felt, looked, smelt, tasted and sounded like..

Overall I think this is a terrific novel, gripping and thought provoking; but I'm slightly uncertain about the character of Isabel. She is clearly meant to be attractive; she's certainly loved. And yet somehow there's a lack of warmth about her. However, this may be partly because the story is told in the first person; if you're writing about yourself, it's difficult to convey how others see you. Or perhaps it's intentional; perhaps the point is that Isabel isn't a heroine in the ordinary sense. There was nothing in anyone's character that made them survive or fail to survive the plague; it was just luck. Isabel is an ordinary girl dealing as best she can with an unbearable situation.

It's a gripping and thought-provoking novel. All Fall Down, by Sally Nicholls, is published by Scholastic at £7.99.

Sounds interesting. Unusual, for sure.

This is one I'll certainly be reading!

Love anything medieval, so looking forward to reading this. Thanks.

Me too, Astrid - especially the clothes! I was looking at a brass rubbing at the weekend, and thought again what a lovely shape the dresses were.

I'm reading this right now but I haven't finished yet. But I actually really like how "ordinary" Isabel is. She is a lot like what I'd imagine the "typical" girl in that time period/social class would have been like. As fun as it can be to read about main characters in historical fiction who do something out of the ordinary for their gender and social class, it can also be interesting to read sometimes about a character who was more ordinary and typical.

On reflection, I agree with you, Rebecca. Here's to 'ordinary' people!