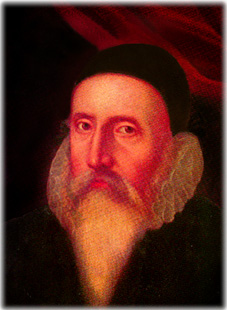 Okay, maybe he’s not my favourite character or the one I love best,  but he’s certainly on my top ten of most fascinating.


Dr John Dee was a contemporary of Queen Elizabeth. A brilliant scholar, he attended Cambridge when he was 15 and studied Greek, Latin, maths and philosophy. As was usual at the time, he believed in astrology, approaching it through the study of mathematics and seeking a scientific explanation as to why the positions of planets should affect a person’s destiny. He was at Cambridge when a charge of sorcery was first made against him after he created a flying mechanical beetle as a prop for a stage play. Such a wondrous thing had never been seen before and, it was thought, could only have been brought about by magic.


Dee had an outstanding mind. He lived in Mortlake, SW London, and owned one of the largest collections of books and scientific instruments in the country. Some years before Elizabeth gained the throne he cast her horoscope and predicted she would become queen. Queen Mary, Elizabeth’s  half sister, had him arrested for this and charged with “calculating”.


When Mary died, Dee was consulted on the most auspicious day for Elizabeth’s coronation. She is said to have visited him several times. Once she travelled by horse from her palace in Richmond with several ladies in waiting expressly to see his magical mirrors but came, unfortunately, on the day Dee’s first wife died. The queen does not seem to have been put off by this, for Dee recorded that on seeing the mirrors, “the queen and her courtiers laughed heartily”. 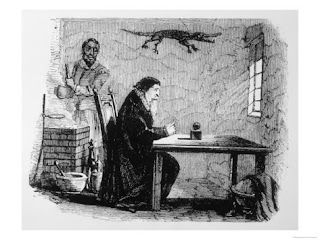 In about 1582 he was introduced to Edward Kelly, a necromancer already convicted of digging up a body and invoking its spirit for the purpose of predicting the future, and it was now that the most curious phase of Dee’s life began. Kelly claimed to be able to contact spirits through a black obsidian mirror (now in the British Musuem) or a crystal ball and Dee seems to have believed this, keeping records of the visits they received from spirits and angels, including many from a “half-elfin, half girl” named Madimi, whom only Kelly could see and hear. Madimi told them to place letters and symbols into graphs and tables and by this means they would discover the philosopher’s stone (the means whereby common metal could be turned to gold). Madimi’s teachings were rather baffling and obscure, however, so unfortunately this miracle never happened.


Madimi  also said that the two men must be as one – in other words, they should share everything, including their wives. Dee refused at first, but Madimi, through Kelly, insisted, and consequently some 16th Century wife-swapping got underway. The partnership between the two men hit rocky ground after this. It is not recorded how their wives felt.


Dee’s longed-for position at court never came his way and he died in 1609, his second wife and several of his eight children dying of the plague several years earlier. Some say he lives on, however, as Prospero in Shakespeare’s “The Tempest” and, right now, in the new “English Opera” composed by Damon Albarn. I’ve written about him, too, in AT THE HOUSE OF THE MAGICIAN. 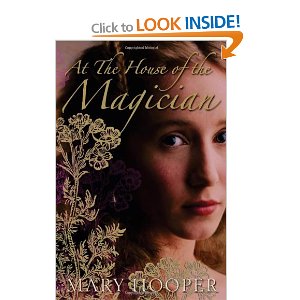 This will be my last History Girls post. I have so much enjoyed being a History Girl, but...times wing-ed chariot and all that: I have two books to write, a new baby in the family - and would really like to think about embarking on an adult novel as well. The History Girls are a learned bunch and there are some fascinating essays coming up, so I am sure that you will go on enjoying the History Girls Blog for years to come.
Posted by Mary Hooper at 01:00

So sad that you're leaving us, Mary. But if it means lots more good books to read, that is something to look forward to. Happy writing!

I heard Neil MacGregor talking on the radio a few weeks ago about the black obsidian mirror - so it's great to read more about Dr Dee! Thanks, Mary, and good luck with all your endeavours!

Lovely post to go out on Mary...and isn't John Dee fascinating. I look forward to reading your book.

Me too! Thank you for all your wonderful posts - not least this last one. You will be much missed!

Lovely post, Mary. Will miss you here but not elsewhere, with luck. And can't wait to read the next book..