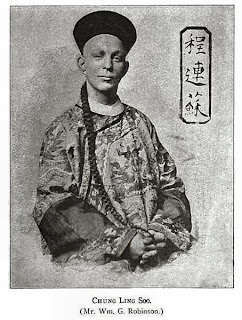 If you search the internet for images of one of my favourite historical figures, magician Chung Ling Soo, you will find him on an array of gorgeous theatre posters with his name lettered in the shapes of dragons and smoke. Among the portraits of this solemn Chinese man with a shaved head and long queue, you might also notice a photo of a Western man with a striking handlebar moustache and think he has popped up by mistake.

But if you look closely, mentally removing the moustache and hair, you'll see a resemblance. Chung Ling Soo was really William Ellsworth Robinson, a New Yorker who was born in 1861. He began his career as Robinson, the Man of Mystery but metamorphosed into Chung Ling Soo, Marvellous Chinese Conjuror in 1900. It's said that he modeled himself on a true Chinese conjuror, Ching Ling Foo, who brought his spellbinding traditional magic show to the United States in 1898.

The story goes that Ching Ling Foo offered a $1000 reward (possibly as a publicity stunt) to anyone who could replicate his illusion of first producing a bowl of water from a piece of cloth, then a child from the bowl of water. Thomas Edison had a go at it, on film at least, which can be viewed here. When Robinson came forward but was rejected, he reinvented himself as Chung Ling Soo, relocated to London and built a new career as a mysterious conjuror from the East who spoke no English and communicated with journalists through an 'interpreter'.

I first learned of him when I happened to see the Flying Carpet Theatre performing The Mystery of Chung Ling Soo on the Edinburgh Festival Fringe in 2005. Only this past week, Flying Carpet put up recorded scenes from the performances and reignited my interest in the story of how Soo created and maintained the ultimate illusion over many years.

He not only managed to keep his true identity secret but created a Chinese alter ego, Suee Seen, for his wife and stage assistant, Dottie. The portraits and photos look unconvincing in places but clearly fooled the public. Chung Ling Soo's exotic "brand", coupled with his growing arsenal of illusions, brought him fame and pitted him in a head-to-head rivalry with Ching Ling Foo that benefitted them both.

One of his most dramatic illusions was Condemned to Death by the Boxers, inspired by the Boxer Rebellion of 1899-1901. The Boxers believed they possessed supernatural powers that would repel knives and bullets and Soo created a stunt in which he caught two bullets in a porcelain plate held to his chest. Audience members who were familiar with firearms were invited to examine the weapons and mark the bullets before Soo's firing squad attempted to "execute" him. He performed the illusion successfully for twelve years until March 1918, when the trick went tragically wrong and Soo was shot dead onstage at the Wood Green Empire theatre.

According to Jim Steinmeyer, author of The Glorious Deception, whose detailed account of Chung Ling Soo's final performance can be read here, there was much speculation that the magician had been murdered or had even committed suicide. As people tried to unpick the illusion to understand what had gone wrong (Soo's own associates seemingly had no idea how it worked), his carefully groomed identity also unraveled. After he was shot, the facade finally slipped and Soo reverted to Robinson, calling out in English for the stage curtain to be lowered.

Chung Ling Soo lives on, referenced in stories and films such as Christopher Nolan's The Prestige. The magician who hid behind seductive veils of glamour secured a place in history with his singular death and the exposure of his colourful double life.

Teresa Flavin is the author and illustrator of The Blackhope Enigma and The Crimson Shard, historical fantasy novels for young readers, published by Templar Publishing in the UK and Candlewick Press in the USA. She is currently at work on the final novel in the trilogy.

Thanks for great information you write it very clean. I am very lucky to get this tips from you.

What a fascinating story! I'm enjoying this month's posts so much - all these incredible personalities whom I a) have never heard of, or b) knew so little about.

fascinating post! I had heard of him but the full story is wonderful. And it must be one of the most interesting things that ever happened in Wood green!

Tried to watch the video. Got a message saying " You are not allowed to access this resource.

When I read stories like this I am reminded of how bizarre and intriguing we humans can be.