MARIE ANTOINETTE: a person from history who's always fascinated me. By Adèle Geras 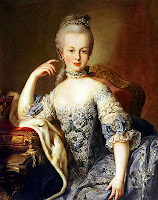 I was nine years old in 1953, the year of the coronation of Queen Elizabeth the Second. I was living in Jesselton, North Borneo and in those days, before television, our 'celebs' were limited to royalty and the Hollywood stars we watched avidly on the big screen. I loved kings, queens, princesses, and beautifully-dressed actresses and I cut out their images to stick in a series of scrapbooks.

At this time, I was immersed in the complete works of Enid Blyton, but I also read a lot of what my mother happened to be reading. One book that made an enormous impression on me was Marie Antoinette by Stefan Zweig. 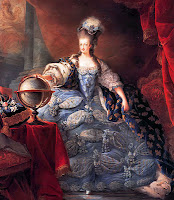 Thus began a life-long interest in the doomed Austrian princess, who came to marry the Dauphin of France at a ridiculously early age. I found her story, even at the age of nine, quite tragic and nothing I've read since has changed my mind. Her life was one of dizzying contrasts. Immense wealth and power and frivolousness on the one hand and horrendous personal misery, grief, suffering and tragedy on the other. She was cultured, intelligent, educated and involved with much that was going on in Paris during the time leading up to the Revolution. She was always an object of gossip, speculation, envy and dreadful calumnies, such as the accusation of incest with her young son, brought against her at her trial. People who know nothing about her think of her as hugely extravagant and silly: fiddling while her people starved. The infamous "Let them eat cake" remark is actually a quotation from Jean-Jacques Rousseau and probably apocryphal.

My aim in this post is not to provide a full historical analysis, but rather to try to convey what it was about this woman that so fascinated me. I'm ashamed to say (and this probably makes me as frivolous as she is supposed to have been) that part of it was the image. As always with celebrities of any kind, how they look is of the utmost importance. Think of Princess Diana. Think of the Duchess of Cambridge. Think of Michelle Obama. I fell in love, quite simply, with the clothes. And the reason I have scattered this post with so many images of Marie Antoinette is because I want visitors to this blog to see what attracted me in the first place.

When the movie with Kirsten Dunst as Marie Antoinette came out, I was there to see it all reimagined Hollywood-style. I can't remember much about the film, except that I was a bit disappointed in it apart from the clothes, and the settings. They were fabulous. The shoes alone were worth the price of a ticket. And Kirsten Dunst didn't look too unlike my Marie Antoinette. I'm including two pictures of her in my gallery of portraits because of that marvellous wig and the dress she's wearing.

Here is a picture of the real Marie Antoinette in a muslin dress. 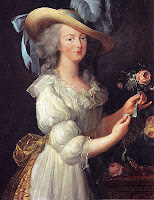 Here she's pictured with her children, part of a publicity drive by the Palace at Versailles to cast her in a better light: as a mother instead of a profligate traitor.

At the turn of the 21st Century, Wendy Cooling asked twenty writers, and me among them, to choose a century and write a short story about some aspect of it. I chose the 18th century and my story is called Toinette. It's about a little girl who meets the Queen of France in somewhat unusual circumstances and I loved writing it. The collection is called Centuries of Stories.

I've always known that it's not the done thing to have as a heroine of some kind a woman who is most unpopular in some circles, but I can't help feeling for her: tubercular, probably suffering from uterine cancer and prone to haemorrhages, her husband dead and her children also, and on her way to the guillotine. This dreadful contraption is to my mind quite the most ghastly of all the hideous methods men have devised for executing prisoners. She stumbled on her way up the wooden steps to her death and her last words were an apology to her executioner for having trodden on his foot. This sketch by Jacques-Louis David shows her on her last journey of all. She was thirty-eight years old.

Isn't *every* famous woman unpopular in at least some circles? I say we should just admire whomever we admire (female or male) and explain why, and leave people to make up their own minds. If they don't agree, so be it.

Ah, thank you Adele! She's one of my favourites, too, and that pic of her on the way to the guillotine is pinned to the noticeboard next to my desk (under the clip of hair from Napoleon - a juxtaposition she would not appreciate, I suspect).

Did you know that her mother instigated an investigation into vampirism and as a result of its finding banned the killing of people/mutilation of bodies to prevent vampirism? They get everywhere, those vampires. (MA is part of the vampire coterie of 17th century France in my vampire world.)

Thanks for - as ever - an interesting post, Adele. But the guillotine, 'the most ghastly' method of execution? Oh no, 'fraid not - not by a long chalk, unfortunately.

That drawing looks like a cartoon, decidedly unsympathetic, but David was a big fan of the Revolution. I'm not sure how I'd feel about the King and Queen if I was a French peasant of the time, but centuries later we can look at it differently. I definitely wouldn't want to wander into Revolutionary France!

Sue, please don't divulge details of the others! Don't think I could take it! I have obviously led a bit of a sheltered life but I think I know along which lines you're going and don't want to follow you!!! Anne, I'm so pleased you're an MA fan!And must read the 17th century vampire coterie book....I will maybe be a bit stronger after reading Mantel's A place of greater safety but my horror of the guillotine abides, in spite of all Susan says....

PS...Anne, I did not know that about MA's mum. What you learn, eh? Thanks for that...it's fascinating.

The Paul Delaroche exhibition at the National Gallery a couple of years ago had a marvellous portrait of her. Painted about 60 years after her death, it showed her before the Revolutionary Tribunal after receiving sentence of death. As ever with Delaroche, it is highly emotive, making you see the ordinary, cruelly-treated woman, facing death with great dignity.

It's difficult to find a good online image, this is the best I found:

Such a sad picture of her on her way to the guillotine. What an appalling time that was...

thanks ANON for that link!

Thanks for reminding us MA probably didn't say, 'Let them eat cake.' And for writing a sympathetic post. I've always thought she was treated so spitefully at her trial and execution

I too loved marie Antoinette for her dresses when I was studying history at a Convent ( a student not a nun!) And what another dimension you've added in respect of her frailties of the body and that awful drawing with her hands tied back. Still to look for that link ANON gave.

I am a card-carrying republican, but that doesn't stop me seeing that Marie Antoinette must have suffered. I believe the guillotine was actually introduced as a 'humane' method of execution, but surely, execution is never humane. Just knowing that you are going to be killed must be so dreadful.
On the other hand, the people who died of starvation in France, due to the horrendous gap between rich and poor, must also have suffered enormously, and those who saw their children die, and couldn't save them. But I do feel that Marie Antoinette was blamed quite unfairly, just because she was a woman and a foreigner.