Knitting for Victory, by Laurie Graham 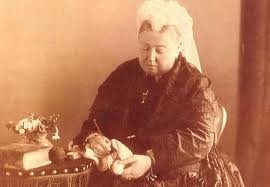 I’ve been wandering around the Crimean steppe these past few weeks, not literally but in my research library. The Crimean War has been described variously as ‘the real First World War’ and ‘a pointless, minor conflict in a far off place no one ever heard of over a cause no-one can remember.’ Whatever position you take the human cost was very great.

I started off investigating Soyer’s field kitchen, which was a very clever portable stove. Alexis Soyer was the Frenchman who transformed catering on the battlefield from a wasteful abomination into simple nourishing sustenance. Of course if Joe Soap of Peckham had offered to go to Crimea and improve the soldiers’ food he’d have been sent away with a flea in his ear, but Soyer was very well, even Royally connected. He’d cooked for Dolly, Duke of Cambridge and many of the army’s senior officers knew him from the Reform Club. But anyway, as always happens with research, way led on to way.

The Crimean War and its participants have given us a number of words. Lord Cardigan didn’t invent the garment that bears his name but he allowed his men to wear a collarless knitted vest under their battledress and probably wore one himself. The Crimean winters were bitterly cold. Lord Raglan, who had lost his right arm at Waterloo, gave us a style of sleeve, designed for his greater comfort by his tailor and later taken up by the world of fashion. And then there was the Balaklava helmet.

The balaklava, a staple of every pre-1960 schoolboy’s winter wardrobe, didn’t get its name until some years after the war. In the Crimea it seems to have been called a Templar hood or simply a helmet-liner. It was warm, versatile, eminently transportable, and an easy item for the ladies back home to knit. Knitting for the men at the front became the thing to do because the Queen was doing it. Queen Victoria was an avid knitter and in that respect quite a ground breaker because knitting had always been a traditionally male skill. She knitted mittens and socks for the troops and, who knows, maybe even balaklavas. In later years she made special scarves for soldiers who had been decorated for gallantry. Not woolly mufflers, but rather fine knitted lace emblems, for Boer War heroes. And with the Boer War I’ve almost reached today’s destination. Lord Kitchener.

Kitchener stitch is an indicator of a knitter’s expertise, a sort of knitting Matterhorn that must be conquered. It involves grafting together two pieces of knitting using a threaded tapestry bodkin as a third knitting needle. The result is a seamless join perfect, say, for the toe of a sock. Whether Kitchener actually devised the technique we do not know, but he was certainly the man who identified the need for it. Soldiers cannot march on lumpy socks. And given a few things we do know about Kitchener  - knitting would still have been a respectable male activity for a man of his generation and he is reckoned to have been an accomplished homemaker  - I think we can give him some credit. By World War I every sock knitter was using Kitchener stitch. And Monsieur Soyer’s field kitchen was still going strong.

It’s been a bit of a wander, from the Crimea to sock seams, but such is often the nature of research.

A final note. In August when I wrote about Richard III’s unknown grave I had no idea what thrilling news was about to break. By the time my November slot comes up I hope there’ll be even more to say.

Knitting was a seven year apprenticeship for men in Elizabeth I's times. Women were not actually permitted to knit - at least as a profession. They were expected to spin the yarn the men used.
Among other things the apprentice had to produce a "carpet" and "stockings".

Men and knitting - I didn't know anything about that! Thank you!

Such fascinating oddments of Crimean fact - especially the "why" of the raglan sleeve and the best knitting stitch for comfortable socks. I never see a Jamie Oliver food campaign without thinking of Soyer, though the fame & sponsorship differ, of course. Interesting that the then "new media" led to a better knowledge of the soldiers lot, as Hislop stressed on tv this week too. Thank you for this post.

I didn't know about the male-only apprenticeship of knitters either, Catdownunder.

I didn't know grafting was called Kitchener stitch - and had never thought about the derivation of "raglan" before either. I love posts about knitting - thank you, Laurie!

Btw, you can make a perfectly symmetrical lace scarf by knitting each half separately from the lower edge up, and grafting them together in the centre. Very satisfying!

What a wonderful picture of Queen Victoria.