One night stand by Adèle Geras

It's not what you think. A one-night stand can also mean a performance that took place on one night only. That is the original meaning of the phrase. This is a post about me and Richard Burton and it tells the story of an evening at the beginning of 1968 when he and I and John Neville and Donald Houston appeared together on the stage of the Nottingham Playhouse, in a programme of readings and music. I was the music. I feel a bit of a fraud writing about it on the History Girls blog, where my co-bloggers are PROPERLY historical and not, as I am, anecdotal, but I feel justified by the imminent publication of Burton's own diaries and by the fact that 1968 definitely counts as History. It was, after all, even before the Moon Landings. Also, in my researches about this, I've found practically nothing on the internet. I wrote to Nottingham Playhouse who told me they had no archive that goes back that far (which I find most odd) and I feel that if I don't write about it, no one will and a tiny weeny piece of theatrical history will be lost. So, in the words of Dylan Thomas, " To begin at the beginning...."

Let me start with a quote from the Oxford Playhouse website: Returning to Oxford and his mentor Nevill Coghill, Richard Burton together with Elizabeth Taylor, famously appeared in the OUDS production of Dr Faustus in 1966. The couple's generosity initiated fundraising for the Playhouse workshop and The Burton Rooms - later to become the Burton Taylor studio theatre, which is an intimate space for student and professional drama, managed by the Playhouse.

I remember that production very well. I wasn't in it because this was the summer of my Finals but almost everyone I knew seemed to be involved with Burton and Taylor (or Richard and Liz, which is what they were called by anyone lucky enough to be in the show.) They were around in a big way. I think they stayed in a hotel in Woodstock. We saw their car. There was stuff in the papers. Liz was famously beautiful in the production http://www.dameelizabethtaylor.com/faustus_stage.html and Richard was...well, Richard. A handsome young American called Andreas Teuber (who now teaches philosophy at Brandeis University in the USA) played Mephistopheles and the whole thing was the talk of the town for ages. Later on, they made a movie of Dr Faustus and I've found a clip from Youtube which gives you some idea.http://www.youtube.com watch?v=QxaYNnvzC6Y

Time passed. I got married and moved to Manchester. I taught French at Fairfield High School for Girls in Droylsden and one day, out of the blue, I got a phone call from a friend of mine called Iwan Williams.[see footnote at the end of this post.] Iwan was now Musical Director at Nottingham Playhouse and he needed someone to come and provide some songs for an evening of readings in aid of charity. Who, Iwan thought, did he know who would come to Nottingham and sing some songs at the drop of a hat and for no money? The answer to that question was me. The gig was on a Sunday night. It would go on till all hours. I'd have to get the milk train out of Nottingham and that would mean a very late start for me at school on Monday morning. I'd get very little, if any, sleep, because there was sure to be a meal or some kind of get-together after the show. Would the Head give me permission to do this? She did and I set out for Nottingham on the Saturday ready to rehearse all day Sunday before the show in the evening.

Iwan and I had done many shows together and we had a repertoire. We decided on a few suitable songs. At one point, he said, what was needed was an unaccompanied, poignant sort of thing. Any ideas? I thought at once of a Hebrew lullaby which was sung to me as a child. I can't find a cover version of it on Youtube but here is a link to the words, which, as you'll see, is relevant to the story. http://www.hebrewsongs.com/?song=laylalayla

Richard and Liz breezed into the theatre after lunch. Liz was wearing a mink coat, if I remember rightly. I liked her at once because although she was, as everyone knew from images like this, wonderful to look at...

she was also short and far from thin. Richard called her, affectionately, 'Lumpy' and if that isn't grounds for divorce I don't know what is, but she clearly doted on him and they did seem very happy. He was also shorter than I expected, and very handsome but with pock-marked skin. 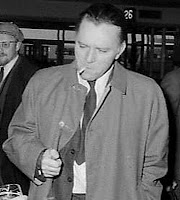 His face looked lived-in, but there was the magical voice which made you forget any physical imperfections. John Neville was very slim and elegant and Donald Houston I remember as being affable and charming. Liz disappeared after a while. I have no idea where she went. The men kind of rehearsed but that didn't take long. They were, after all, reading poems and the only thing they had to do was sit on a sofa or a chair and come to the front of the stage when it was their turn. My songs were to be interspersed throughout the proceedings.

Everything went well. The house was full. Then, about halfway through the show, Richard read out some poems written by survivors of the Aberfan Disaster. He read so movingly that the audience was silent when he finished. It was as though no one even dared to breathe. This was my cue to sing the unaccompanied lullaby. When that was over, the applause was deafening and when I went back to sit next to Richard Burton on the sofa we were sharing, he leaned over and whispered in my ear, "Do you know, I think they think you were singing in Welsh." Which, of course, was the reason for the tumultuous applause...the Hebrew lullaby seemed to be linked to those poor children who died at Aberfan and the poems they'd just heard.

We did go out that night and here is the only account of the evening I can find. It comes from a website called THIS IS NOTTINGHAM. com You will notice that I'm not mentioned, which is one of my reasons for writing this post. I was there. I danced with Richard Burton. I took the milk train out of Nottingham on no sleep and taught French for a full day. That's the sort of thing you can do when you're young. I couldn't do it now. Others who were there that night are dead, so mine is the only account. I wish Nottingham Playhouse had an archive. I wish I could have live-Tweeted the evening. In those days, we didn't even think of taking photos. This post is the next best thing.

A footnote: While I was composing this post, I wrote to David Wood, children's playwright and adaptor extraordinaire. David was a leading light in Oxford theatrical circles in our day and keeps a very nifty little archive himself. I asked him about Iwan and whether he knew anything about his time at Nottingham Playhouse. He didn't as it happened, but he sent me this message back,which I'm quoting in full. "The only thing of interest I can tell you is that he (Iwan) later became the musical director at the Newcastle Playhouse, and in the early 70’s was the md of ROCK NATIVITY, the musical I wrote with Tony Hatch. It was directed by Gareth Morgan (father, incidentally, of the television writer Abi Morgan), and the band featured a local teacher, who played the bass guitar. His name was Gordon Sumner. He – Sumner – fell in love with the actress playing Mary, Frances Tomelty. They married. She persuaded him to leave teaching and follow a musical career. He changed his name to Sting, and the rest is history!"

This is definitely history! Anecdotes are fine; just ask at any school and I bet there are kids who have been told to interview their grandparents. And given that most people alive now weren't born then, it's sure history for them. I long ago came to the conclusion that history doesn't have to be about the Middle Ages or the Victorian era. That was when I was asked to write a short story on a history theme and chose the day of the Apollo 11 moon landing. Asked again, I wrote one about the Beatles visit to Melbourne in 1964. Be happy you are a part of history! :-)

What a fabulous story! Thanks for posting this.

Here's some glorious glamour for a mirky morning. Thank you, Adele.

Oh, Adele, how fabulous! And yes, those of us who remember the 1960s can definitely call it history!

Anecdotal - and astonishing. This is the most wonderful history.

Thanks everyone! I have just altered something in the post above, which shows how dodgy memory is. I had Richard B calling Elizabeth T DUMPY. That's how I recalled it. But in a review of Burton's diaries in today's Sunday Times, I discovered it was actually LUMPY!! Thanks to the wonders of technology, I was able to change my text. I misremembered! Apologies.

Fascinating! I went to Nottingham Playhouse a lot in the late 60s, when I was in the 6th form. John Neville was there, of course, and Gemma Jones. They did a wonderful Midsummer Night's Dream. I didn't see your your show, though - how amazing to have been a part of that!