The Dark Art of……. Poison by Theresa Breslin


Being a country kid I was very much aware that not everything growing in garden, field or forest was good to eat. Great Aunt Mary had a fund of stories about foolish wilful children who didn’t listen to wise advice and went about stuffing glistening berries, tasty looking mushrooms and tantalising fruit into their mouths. She regaled myself, and my siblings and cousins with tales of disobedient greedy brats who died horrible deaths, shrieking and foaming at the mouth, or at the very least were left hideously deformed, sobbing in sorrow and regret. If her aim was to terrorise us into not touching anything without first checking with an adult that it was OK to handle and eat then she certainly succeeded. Obviously it also engendered in me a fascination for the subject. I spent hours making lists of forbidden items, with notes attached. For instance when the season arrived where we broke off sticks of rhubarb, running into the kitchen to raid the sugar bag, then pouring a handful into a twist of paper to use it like a sherbet lolly, I scribbled in my jotter:

“RHUBARB - sticks taste good with sugar - Do NOT eat the leaves. Theresa you will DIE!!!!”

Beside this entry I drew a skull and crossbones

I was big on skulls and crossbones and also placed these beside entries for laburnum, foxglove, deadly mushrooms etc.  I made maps to show where I’d found suspect items, and in turn I terrified younger relatives by telling them that if they even wandered close to some plants they might succumb, and the rest of us would have to carry their corpses home to their weeping mothers.

While researching The Nostradamus Prophecy I discovered that it’s Catherine de’ Medici whom France has to thank for ballet, bloomers, perfume and… poison. It is said that she brought from Italy the secrets of scent, thus founding the French perfume industry, but also carried with her the dark art of poison. This is in part linked to the reputation of the famous poison garden of the Medici family situated in Padua. I regret not visiting it when writing The Medici Seal but to my amazement, after that book was finished, I discovered that Britain has its very own poison garden… 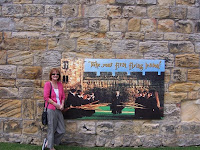 Alnwick Castle, home of the Percy family, of song and story and  famous as a location for filming Harry Potter. I couldn’t resist having my photograph taken in the courtyard where the Broomstick Flying Lesson was filmed!

And the Poison Garden? 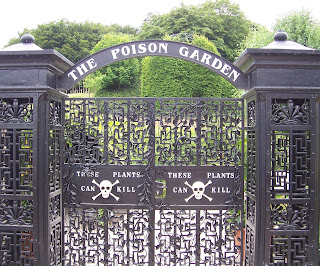 The first thing to say is that the custodians take their responsibilities very seriously indeed. The area is kept securely locked and guarded and entry is only via guided tours given by experts, who have a wide knowledge of plant history, their therapeutic use and modern medical developments. 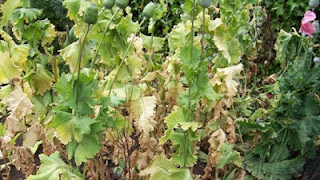 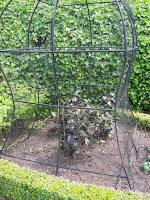 Vital research is conducted here and there’s a huge amount of information being garnered about effects on the human body - marijuana, magic mushrooms, aphrodisiacs, poppies, and plants so dangerous that they are kept in cages.

The staff are charming, helpful, willing to share information and very interested in visitors’ anecdotes and tales of country lore.

The Edinburgh World Writers’ Conference  debates are online with the Conference now moving to different venues around the world. In November Theresa will be with Melvin Burgess to debate themes in Krasnayarsk in Siberia. You might like to join in!
Theresa Breslin and Kate Leiper will discuss research for the Illustrated Treasury of Scottish Folk and Fairy Tales, at the National Library of Scotland in EDINBURGH on 22nd and 24th October.
Divided City – in conjunction with the Citizens Theatre a schools production is now underway in South Lanarkshire with performances scheduled for February 2013.
Posted by Theresa Breslin at 00:15

What a fantastic looking castle - and that poison garden is so darkly sinister - love it!

I love the idea of a Poison Garden - how very handy!

Am particularly interested in the metal cages; if adapted, they could be a handy protection against the two garden raiding, plant-eating deer which are my arch-enemies at the moment...

Hugely interesting and entertaining post! I do want to go to the poison garden one day- but what a useful aunt! If somewhat melodramatic.. I was taught taught what berries and leaves one could eat and use for tisane -my grandmother knew that. My heart sinks when I hear people parroting things like: Red berries are edible, black are poisonous.
That would have people eating spindle berries, yew-berries, and arum berries, while leaving blackberries untouched.

A poison garden - what a lovely idea. Just think what Conan Doyle could have made of that!

Kate - Alnwick is the most amazing Castle, one of my fsvourites. There's tons of stuff to see and do - the Knights School for instance - and the staff are so friendly. It must have been very hand down through the ages Joan. 'm sure all those medicinal herb gardens grew plants like this. I'm sure the metal cages can be bought online Sue, although deer are very persistent. Leslie, Great Aunt Mary was a blast, I'm sure she embedded storytelling in my bones and yes there's a lot of dangerous rubbish out there re plants, especially mushrooms.

Jo, if you think the Poison Garden is a lovely idea and are interested in Conan Doyle then try to pay a visit to the Edinburgh Surgeons Museum, it's fascinating.

Am just writing a scene where my (Elizabethan) heroine tries to work out the best way to kill her husband, so this is perfect timing! Clearly I need to get myself to Alnwick again.

Gosh Pamela, so many methods to choose from... And, unlike today, a lot of them untraceable. It would depend on how much she hated him whether she'd want to make it excruciatingly painful or just have him slip peacefully away. I note you say she's a heroine. Does that mean she won't get caught????

Lovely blog, Theresa - thank you. My recent research gave me enormous respect for Monkshood, which I would bet is the plant your aunt warned you about even going near. Or looking at funny. Wouldn't surprise me if it's caged and chained at Alnwick. It was used as a pain-killer in Elizabeth's time and earlier, but lord knows how they measured the dose, since a very tiny amount can kill in eight minutes. I rejected foxglove - vomiting and hallucinations - for taking too long. As did most fungi. I wanted something fast,lethal and locally available to my characters. Monkshood fitted the bill.

Thanks Susan. I have heard loads of stories about Monkshood, except how it got it's name - makes you wonder...The other strand I found interesting is ergot which was used in childbirth but has toxic potential.

Glad you liked it Ella

Ah, ergot! The base of LSD. I saw a documentary that suggested it might have been ergot that led to the Salem witch trials, with the girls having nightmare illusions after eating food made from the spoiled crops.

I've been having trouble finding any information about the Medici's poison garden. All I've been able to find is the Orto botanico di Padova. Is that the same thing? I haven't been able to confirm