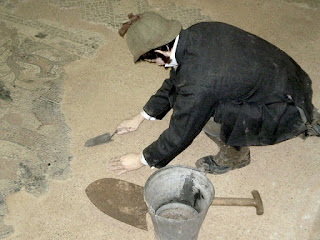 My husband Richard thinks it’s because the genre is interactive. We are presented with clues and if the author plays fair we can solve the crime along with the detective.

Bookseller Ben in Norwich says it’s the most moral of the genres. The detective is a Truth Seeker who often metes out his own brand of justice in a world that seems wildly unfair.

A Scottish Twitter friend said, “Pure and simple, folk are nosy and love nowt more than rooting round in other folks business.”

Some people are attracted by horrible crimes and by seeing the depths of depravity humans can plumb. This is not simply ghoulishness. It is the human way of warning one another. We don’t have instinct to teach us, as animals do. We have stories, told around a campfire or on a Kindle. 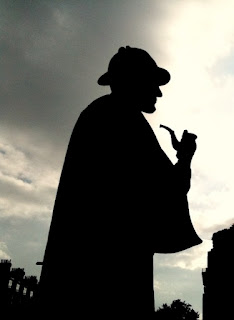 Many people like the world of the detective. Detective stories are always set in a very specific place and time. Think of the Late Victorian London of Sherlock Holmes or the 1930’s Los Angeles of Philip Marlowe. And the detective often goes up and down the social strata. Through his eyes we see the whole world.

Quite a few people came up with an answer that surprised me. They liked the structure, order and logic of a Detective Story.

I’ve said it before but I’ll say it again: The detective and the historian have similar jobs, reconstructing a past event by means of physical objects (clues/artefacts) and first-hand reports (eye-witnesses/primary sources). Sometime the detective re-enacts the events around the crime. The historian likes re-enactment events, too.

Not everybody identifies with a superhero or even an action hero. Anybody who tries to figure out how the world works is a ‘detective’. The word itself is a compound Latin word that means uncover de (preposition meaning down from or any reversal) + tegere (cover) = detegere (uncover). We’re always trying to uncover things and see how they work underneath.

So in a way, we are all detectives.

In July 1999 I got the idea of writing a story for kids set Pompeii. My concept was Nancy Drew in Roman times.

Most writers of fiction choose a version of themselves to be the hero. My hero, Flavia Gemina, is me as I would like to have been in Roman times: blonde, blue-eyed and rich. Flavia is a Truth-seeker. She is the one who drives the stories because she wants to solve the mystery. Like Flavia, historians are Truth-seekers.

Flavia’s best friend is Nubia, her gentle ex-slave-girl. Nubia is intuitive. Sometimes a detective needs intuition more than brains. That’s where Nubia helps Flavia. Like any good sidekick, her gifts complement the hero’s. Like Nubia historians need to understand human nature and go with their intuition sometimes.

Jonathan is practical and inventive. He creates some of the gadgets a detective needs. He is also the Voice of Reason and holds Flavia back from making impulsive decisions. Like Jonathan, historians have to piece together broken objects and reconstruct how things work.

The fourth member of Flavia’s gang is Lupus, a half-wild beggar boy who can’t speak. He is the wild one, but good at following people and spying on them. That’s one of the appeals of detective fiction. We all like spying and eavesdropping on people, to see how others live. “Pure and simple, folk are nosy and love nowt more than rooting round in other folks business.” The historian loves peering into people’s offices, bedrooms even bathrooms.

Lupus is also good at disguising himself.

This is another aspect that appeals to us. The possibility of ‘being someone else’ for a few hours. I think that’s why there are so many historical re-enactors. You can be a Civil War soldier or a Roman doctor for a weekend. (And of course that’s why we like reading books. Author Claire Tomalin recently said “Through fiction we can actually live all these other lives…”) Many of the best historians dress up in period costume. They disguise themselves in the past.

Of course, the historian will never be able to exactly re-construct the past in the way a detective can figure out whodunit, but it is worth the effort. And it’s huge fun.

Back to why do we like detective fiction so much. My friend Graham Marks, an English author of Young Adult fiction, says it’s because detective fiction makes sense of the world. And that’s what human beings want most, to make sense of a seemingly random world. To contradict the musician Sting, history can teach us something.

This is one of the reasons historical novels and detective stories are so satisfying. The genres go together. The heroes go together.

We are all detectives, trying to solve the mystery of how to live in the world. Stories help us do that. Especially history mystery stories.
Posted by Caroline Lawrence at 00:05

I love that - "We are all detectives. trying to solve the mystery of how to live in the world." And I think that's what gives the best detective stories their extra edge - that that's what their characters are trying to do, as well as to solve mysteries,

OK, I'm going to disagree a little here. I like the basic comparison between historical fiction writers and mystery writers, but I'd keep historians out of it. Historians are not necessarily only using evidence to "uncover" the truth. In reality they bring a whole bunch of things to their diagnosis of an historical situation. Whereas the detective hopes to reach a definitive conclusion - though he may not always do so - the historian can never hope to do so as there will always be another piece of evidence. Thus with every new generation of historians there is a reinterpretation. I'm not sure a detective would welcome that - though of course it sometimes happens!

I was so moved by this piece. Terrible to think of the fear and suffering they must have endured. I hope they will grant them dignity in death after all these years.

It reminded me of the Island of Spinalonga, in Crete where the lepers were banished to. I visited it before 'The Island' came out. The atmoshere on that island was so powerful, it left me disturbed for days.