The Importance of Remembering by Lucy Inglis

Last week a friend flew in from Charleston. He wanted to spend a couple of days sightseeing in the City of London before he spent the weekend with friends, so we decided to take in St Paul’s Cathedral and the Tower of London.

I started working in the City of London almost fifteen years ago and I’ve lived here for seven. It is, as people often observe, a very lovely but peculiar place to live. It doesn’t have the obvious appeal of somewhere like Paris, Rome or Venice. There are no green spaces, people hurry everywhere all the time. It’s either too crowded, or deserted. There are too many offices and Tesco Metros, but it does have a thick crust of time that clings to almost everything. Even the new buildings are tinged with it, like a creeping moss. In the fuss and inconvenience of the Olympics, the endless construction work, I had forgotten, but it only took a few hours to rediscover.

We went first to St Paul’s cathedral, where my guest was somewhat shocked to see a service starting as tourists walked around, chatted and took photographs, although, he reasoned, in a place the size of St Paul’s what else could you do? We looked at everything, and climbed to the Stone Gallery for the incredible view of the City below (not the Golden - vertigo beat us). In the crypt we visited the tombs of Nelson, Wellington, Turner, and of course, Wren as we discussed burial rituals in Georgian London and in the American South, as well as the most macabre tombs we’d seen. He won by some margin after regaling me with the image of the rotting corpse carved in stone he’d seen in New Orleans. 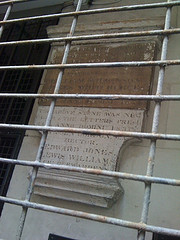 Then it was to the Museum of London, via the medieval and Roman London Wall. I had forgotten it was there. Seeing it on the street was almost a surprise. The grey squirrel sitting on the top of it seemed equally unimpressed, looking at us as if to say ‘What do you want?’ Around every corner we seemed to find something else. At the Museum we saw London from prehistory to the modern in what was literally a whizz around before we went over to the Guildhall to look at the Roman amphitheatre. I feared I had history’d out my companion, already weary from his flight. But no, back he came for more the following day. 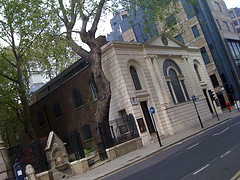 At the Tower of London we sat by the river, had a cup of coffee looking at Tower Bridge, and marshalled our resources. There is, after all, far too much to see on one visit. We debated the Princes in the Tower, the recycling of crown jewellery, and how long it would take to carve a shield and motto into the stone wall of your cell. All the ravens were annoyingly camera shy. How and why did Walter Raleigh ultimately get it so wrong? For my friend, visiting the church where Thomas More is buried was an unexpectedly moving moment. 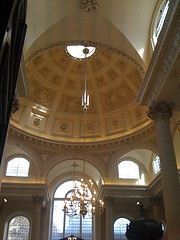 At Tower Hill, we said goodbye. I had decided to walk back, past the end of the street where Samuel Pepys lived, past the Monument to the Great Fire of London, the Bank of England, the Mansion House and streets with names such as Huggin Lane and Old Fish Street Hill. All these things I had forgotten were there in my rush for a pint of milk and the often elusive dog food.

The photos in this post are not of the big things but of all the little things we saw, neglected corners of the City. A memorial tablet bedded into a wall where a churchyard once stood, the chapel on Aldersgate, and the interior of St Stephen Walbrook. Rediscovering all the good things about where I live turned sightseeing with a friend into something really memorable. Now I have to be sure not to forget again!
Posted by Unknown at 09:25

Lovely! And the photos are very good too! Writing posts about things is a good way of remembering.

What a wonderful day you had. I loved your phrase about the thick crust of time that clings to things in the city. I guess we historical fiction writers try to make that crust crisp and palatable in the recounting - anyway, you certainly did.
Michelle Lovric

It's funny, isn't it, how taking someone else around the area where you live makes you see it with new eyes?

I've never been to St Paul's, or to the Tower. Maybe next time I come to London...

Great post! Love the idea of reconnecting with your own city's history! Lots of that to be done in a city like London,

You're so right, Jean. That's exactly what I thought when I was reading this post. I love showing people around Melbourne, where I live. It's nowhere near as old as London, and many tourists simply skip it when visiting Australia, but it, too, has stories to tell if you're looking and you look most when you show visiting friends and relatives around. I showed around a friend from England who had given herself just two days in Melbourne and was amazed how much we saw and did in just one of those days( we had to give a full day to the Healesville Sanctuary). And one day I was the tram with my mother when she said,"oh, look!" and pointed to a building we must have passed many times over the years. It sprouted gargoyles and dragons! We had never noticed. Later, I visited and found the inside was as gorgeous as the outside. It was a historic bank, still in use.

Allow me to thank you for this interesting post.