I recently visited the Hollywood Costume Exhibition at the Victoria & Albert Museum*.  It was very popular. I went with my daughter and we were reduced to a shuffle as we wound round the different areas of the exhibition but that didn't matter. The slow progress gave us more time to look. I have to admit to being as star struck as anyone and standing in awe in front of the most iconic outfits: Scarlett  O'Hara's dress made from curtains, Marlene Dietrich's top hat and tails and Audrey Hepburn's Breakfast at Tiffany's Little Black Dress. 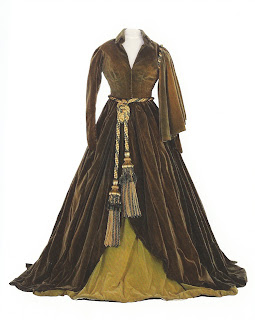 It put one back in touch with favourite stars, favourite films, favourite film scenes. It was also sobering to think that many of the stars who wore these costumes were dead while the clothes they wore lived on.

For me (once I'd got past the boggling stage) the most interesting aspect of the whole exhibition was the research process that the designers went through to create these costumes, their painstaking attention to detail. The History Girls routinely post about costume. Marie Louise Jensen did a piece about Men's Clothing in the 1700's just this week. When you are writing historical fiction, it is important to know what your characters would be wearing. Finding out is often uppermost in our minds, that is why we blog about it. We look at different sources, just as the film designers do. Museums, like the V & A, with specialist departments can be very helpful, and then there are books on costume. There is also, of course, the internet. Sometimes helpful. Sometimes not. An internet search for '1940's knickers', for example, can take you to some very strange places. The garments featured under 'retro' bear little resemblance to my granny's pink bloomers or to the rubber roll ons I remember women struggling into in the Fifties. But one has to persist. it is important to know what one's character would be wearing, right down to their underwear.

As I shuffled round the exhibition, I realised that there was another dimension to this. It is not just important to know what a man or woman would be wearing in 1789, for example, but it is important to know what your character would be wearing. We have to know who our character is before we can decide what clothes he or she would put on in the morning. It is important to get the period right but clothes tell us a great deal about personality as well as position and status in life. I'd always instinctively known this, but here it was spelt out for me. One whole area was devoted to just this: Deconstruction.

'On every film, the clothes are half the battle in creating the character. I have a great deal of opinion about how my people are presented. We show a great deal by what we put on our bodies'

One is always attracted to areas of special interest and one of mine just happens to be pirates. When I first saw Jack Sparrow in Pirates of the Caribbean, I immediately thought of Blackbeard. The pigtails and plaited beard, the stance. But the designers also channeled Keith Richards for both his 'look' and his personality. That was interesting. With care, one can improvise. An insight like that can make a character a whole lot more than a historical clothes horse. 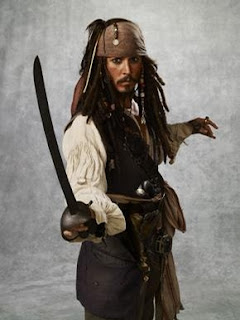 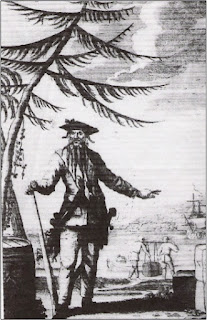 I was also halted at another point on my shuffle round. In front of the costumes for Shakespeare in Love, there was a quotation from Joseph Fiennes who played Shakespeare. When contemplating the part he looked for:

'[The] human element - all things [one] wouldn't associate with being a genius... I put aside all reverence and adopted the attitude that as soon as I put on those tights I was Will Shakespeare.' 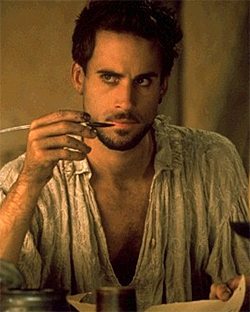 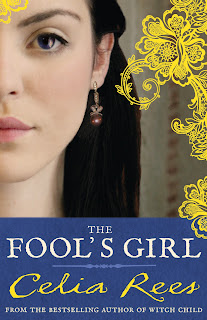 Even though I had no idea that was how Joseph Fiennes found his way into the part, I immediately identified. When I was writing The Fool's Girl, I had to discover my own way round Shakespeare the genius. I did so by finding my Will Shakespeare in Mr Fiennes. When you see something like that, it is a good feeling, as though your insight is vindicated.


I found much to think about as I went round this exhibition. Just as it is on the screen, so it should be on the page.  Nothing is accidental. Everything is there by design and clothing should suit the character, not just by being right for the period but right for the person.

Once in a while, costume and clothing can do something more.  One of the last exhibits is Judy Garland's costume from The Wizard of Oz. It is worth the long, slow shuffle. The power and magic of L. Frank Baum's fantasy is eloquently expressed in the contrast between Dorothy's faded, dusty blue gingham dress and the dazzling brilliance of the ruby slippers. It is all there in the costume. 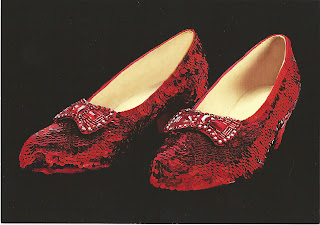 *The Exhibition is on until 27th January, so you still have time to catch it if you are quick.
Posted by Celia Rees at 00:30

I felt something of that when we went to the Lord of the Rings exhibition at the Science exhibition. Not history but fantasy but every single item had to be fully imagined. And that's what I do when writing fantasy too.

I went to this exhibition too, and blogged about it in December - loved it, especially the bit where designers, actors and directors discussed the costume design of particular films. But what tiny waists those actresses had!

Indeed, Sue, but fascinating that everyone who goes will have a different take on it. And, yes, tiny! Like a different species.

Good to know that we are in accord, Mary. I went to see The Hobbit last week - and re-read. Nearly blogged about that but judged not sufficiently HG.

Enjoyed this, Celia - thanks. I've often thought that a writer is like the complete crew of a film. We're not just the script-writer, but the director, the lighting-crew, the sound-crew, set-designer and costume-designer too - oh, and location scout!

As you and Mary say - every little detail.

Clothes design in movies fascinates me - as someone mentioned, the Lord of the Rings costumes were stunning, not just because of how they looked but because of the mind boggling DETAIL they went into. I mean, if I remember right, Denethor never even draws his sword, and yet he has one, beautifully crafted and decorated to character! Just astonishing...

Historical drama always intrigues me. I do wonder how much of what I see on tv is researched, and how much is popular consensus on what a Tudor chose to encase his legs in! Need to read more methinks!

I often think that in another life, I'd loved to have been a film designer or a location scout, but I guess we do it all anyway, as Sue Price says.