THE SCENT OF DEATH by Andrew Taylor: review and interview by Adèle Geras

I first came across Andrew Taylor's work when I read one of his Roth Trilogy novels in the 1990s. I was attracted to the cover image of a stone angel. This trilogy of novels so impressed me that I wrote a longish critical article about them in a periodical called BOOKS AND COMPANY, and you can find this if you go to http://www.lydmouth.co.uk/page3/page5/page13/page13.html 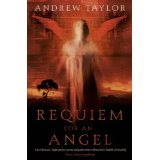 Taylor is a historical novelist of long standing. His book, THE AMERICAN BOY, was chosen for Richard and Judy's Book Club and his THE ANATOMY OF GHOSTS is a cracking story set in 18th Century Cambridge, at almost exactly the same time as THE SCENT OF DEATH. He's known as a crime writer and one of his best series, THE LYDMOUTH NOVELS is set in the 1950s. If you look at his books, you'll see he's both prolific and a bit uncategorizable, which is good news for his fans, because there's always something new and different coming from his direction.

His new novel is called THE SCENT OF DEATH and it's set in Manhattan in 1778. This part of America is still under British rule and it's a place full of soldiers, loyalists, refugees, and a maelstrom of corruption, fighting, and everything you might expect in a country where there are at least three sides to every problem that arises. Edward Savill is our hero and as he arrives from London, almost the first thing to greet him in the New World is a dead body. From these beginnings, Taylor spins an intricately woven plot which not only takes in adventures, such as a memorable journey to the Debatable Ground, outside the city limits, but also a very slowburning, almost Jamesian love story. Savill is billeted on the Wintour family and it did cross my mind to wonder at the name, which nowadays means a lot to fashionistas everywhere but especially in Manhattan. 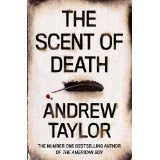 Taylor is very good at conveying what interior spaces are like. He manages to make us feel part of the household, and it's a very interesting place in which to spend some time. There are several generations of Wintours living here. Arabella is the woman mentioned in the very good first sentence of a terrific first paragraph: "This is the story of a woman and a city." and she's as beautiful, enigmatic and mysterious as you'd expect of a romantic heroine. We are in the era of slavery, of course and this strand of the narrative is among the most interesting, with several slaves among the protagonists. There is a painting of a house that's part of the central mystery and, as in many of Taylor's books, we also find a child. Savill hears one weeping in the night, and the motif of missing/dead/ghostly children is something Taylor returns to again and again in his work, to good effect.

This is the kind of thriller you can recommend to people who are not normally readers of crime fiction. I mean this as a compliment. Absent from its pages are a)frenetic pace b)hideous torture and evisceration and c)overly explicit 'scenes of a sexual nature' as they're called on Sky tv. Andrew kindly allowed me to ask him some questions, and here they are, together with his answers.

1)This book is set in a very familiar place in a most unexpected time: New York in 1778. What was it about both (the time and the place) that attracted you?

I was reading a book about the American War of Independence - Barnet Schecter’s The Battle For New York - and one detail stuck like a burr: that embankments on the North River served as the last resting places for the corpses of rebel POWs. It’s one of those historical details that carry a lot of metaphorical weight. For most of the War, New York was the military and administrative capital of the British Empire in America. It seemed a perfect setting for a novel because it showed somewhere we know so well in other guises, New York City, from such a a different angle - and that always appeals to me. The germ for The American Boy was very similar in that sense - Poe, such a quintessentially American figure from the Victorian age, seen as an English schoolboy in Jane Austen’s London.

2)This book is at the same time a) a historical novel of a traditional kind, b) a thriller and c) a slowburning love story. Were you conscious of the difficulties of blending these three kinds of book together?

No - but perhaps I should have been. I don’t really structure my novels before I begin. I knew a lot about the characters and the setting. I knew that for me it was going to be a book about loyalty, both personal and political, and whether or not it’s an absolute value. (The working title was in fact The Loyal American.) I had vivid pictures in my head that I wanted to find a way of realizing - the ice on the North River, for example, the shanty-town slums they called Canvas Town, the burned-out wreck of Trinity Church, the double portrait of master and slave, etc. I also knew that there would be a corpse or two - I am, after all, usually labelled as a crime writer - and that there would be a woman... For the rest - it emerged, in the way that stories do, a way that I still find quite magical.

3)The question of slavery is important in the novel and yet you write about such matters in a low-key but devastating way. Was it your intention that your readers should learn something as they read? In other words, is there any didactic intention behind the book?

No. It goes without saying that slavery is a revolting and unacceptable practice. But in the eighteenth century they saw such things very differently, particularly in some of the American colonies where it was woven into the texture of all levels of society. What interested me was slavery’s normality: and what this might have meant for those who were slaves and those who were free citizens. Personally I don’t think it’s the job of a historical novelist to impose his or her modern views on the past; the reader provides that perspective in any case. But I do think we can write as honestly as we can about it - and how it seemed to people at the time. Perhaps that helps us towards a better understanding of the present, and how it seems to us.

4)You're a very convincing 18th century gentleman and speaking for myself, I was delighted to see a book in the past tense. Do you have views about the use of the present tense in so many books written these days?

Thank you - I’m glad the voice was convincing. In a historical novel, I try (within reason) to create a plausible pastiche of how people might have spoken and thought in a particular period. The narrative fell naturally into the past tense - I had an image in my mind of the central character writing it after the event. In general, though, I’m not a huge fan of the wholesale use of the present tense in fiction unless it serves a very definite purpose; I agree with Philip Pullman that, as a writer, you can achieve more if you have the full range of tenses at your disposal. Having said that, I’m at present writing a novel with two narrative voices - one of which is present tense. Horses for courses...

5)I read about your RSI on the website. Can you tell us a bit about how you manage this?

I’ve had chronic RSI for nearly twenty years, the result of writing too much, too fast and in unergonomic positions. So I began dictating everything, and my wife would type it up. Then she got RSI herself - and far worse than I have it. We have tried - and tried and tried - voice recognition software. I can’t get on with it at all - it doesn’t like my voice, my vocabulary or my method of writing. My wife copes better, though it’s very frustrating for her. I dictate the first drafts of most books into a machine; my wife transfers it to the computer via voice recognition, adding her comments etc on the way, and then I revise on screen to make a second draft. RSI comes in many shapes and forms, of course, and varies enormously in severity. If you get it as badly as we have it, you never get rid of it entirely. But you can learn to manage it and to reduce its impact.

Great review and interview, Adèle! I can't wait to try this out! :-)

This is such a terrific post on so many levels: - for the comprehensive book review(s) which makes me want to read all Andrew's books; for the RSI advice (having suffered from this I sent to the USA for a special keyboard which I find helps a bit); but most of all for allowing me to read that wonderful phrase about the emergence of a story being quite magical. Thanks Adèle!

Sounds like an interesting book, and thanks for the interview, Adele.

Very sorry to hear about Andrew's RSI, which is a definite hazard of our profession, not helped by the amount of blogging etc we're all expected to do on top of the actual writing these days. (Which probably makes commenting on blogs a rather masochistic pastime!)

Terrific review and interview, Adele! I must read this book.

Enthralling interview Adele. I was particularly struck by the phrase 'slavery's normality.' I think its one of the hardest thing to do as a historical writer, to convince the reader of the 'normality' of attitudes and behaviour which were accepted even as recently as thirty or forty years ago, within our own lifetime and experience, but which today are regarded as abhorent.

So many themes and directions coming together to make something entirely new. It's fascinating and marvellous.
Yes, I shall be seeking out Andrew Taylor, too.

So many things to think about in this post - and such determination to keep writing too! Will certainly watch out for Andrew Taylor's books. Thanks, Adele, for this.

These books sound so interesting. Thank you Adele.