The weather forecasts are full of snow, especially snow that matters in the South. It’s a time for watching the hungry birds snatch scraps from the bird table and appreciating the pleasures of working from home.

For a start, I can walk to the shops so, assuming deliveries continue, I am not going to go hungry.  Besides, it’s a quiet season for author visits so nobody will feel disappointed if I don’t appear and I can just enjoy being here at my desk. What a blessedly easy life! 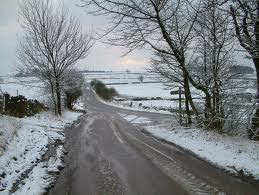 Snow is almost timeless. I recall mornings when ice coated the inside of window-panes and milk rose in frozen columns from milk bottles; days when the soft silence outside was broken by spades scraping harshly across paving stones as pathways were cut through the snow.

Indoors was a den devoted to drying-out: from the wet clothes on the clothes horse to the oozing shoes and boots by the scullery door. The boredom was interspersed by interesting domestic moments: the newspaper catching fire when held across the fireplace to blaze up the flames; the ominous drip from burst pipes, the flickering pattern on the ceiling painted by the light from the paraffin stove which was a sign that one was allowed to feel ill.

The warm, fusty smell of winter clothes led to “Go out and play!”, with the remembering of gloves and scarves and hats as well as grizzles over ear-aches, chilblains and dead fingers mostly ignored by grown-ups who had sat frozen in airplanes or endured bitter winters on battlefields or whose thoughts were of stretching the rations.

More widely, there were wondrous tales of snow higher than cottage roofs and snow-drifts lasting until Easter and stories about farmers and fishermen and such heroic people, braving the freezing weather to struggle on with their daily work, as they always have done.

At the back of the mind, snow brings images from history: great glacier sheets that ground across Britain; those year-long winters when crops failed and social order struggled or the rowdy cheerful frost fairs on the Thames. 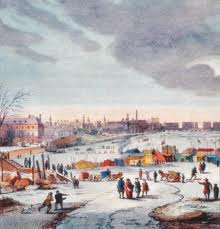 There’s also the strange heroism of explorers who braved ice and snow not because they had to do so to make a living but because they chose to do so: people such as Captain Scott with his Terra Nova expedition, who reached the South Pole on this day in 1912.
Brrrr! I’m off now to fill up a hot water bottle - from a kettle, not warmed in a microwave. One of winter’s treats. Then , all cosy in bed, I’ll dream up a wintry scene or two for writing when I get back to work.

I do know that, whether I’m under the duvet, struggling along icy paths or hacking vegetables for a large pan of soup, certain lines always capture the feel of winter, no matter what the year.

Lovely post, Penny. Quite took me back, chilblains and all.

Windows painted with ferns by Jack Frost! Frozen puddles - 'At every step there breaks a pane.' Ice slides down pavements.

Prose poem about snow, and then the only bit of Shakespeare that mentions me - thank you! Back off to my keeling with a cheered heart.

I was thinking about chilblains only yesterday! I love "snow in the South where it matters" Penny! And I'm sure neither you or Joan are greasy, unless Shakespeare thought it was a good idea to eat a lot of fat in perishing cold - about which he was, as so often, probably right.

Lovely. I am heading north to meet the snow in mountainy wales today. I just hope there isn't too much and I can come home! Love the poem, my Dad learnt it by heart in a village school in the cockpit country of Jamaica years and years before he ever saw an icicle!

Lovely post. There's no snow here yet, but there's that sense of anticipation and excitement, because there probably will be some tomorrow; everything feels still and grey, waiting.

Don't like the snow at all but love seeing it in pictures, reading about it in lovely posts like this and oddly enough that bit of Shakespeare was in my head only minutes ago! I went to get bird seed and suet balls out of the shed and there's a whole row of icicles hanging from the roof! Looks very pretty. I can also trudge to Waitrose so no worries but I hope the buses keep running so that I can get to Les Mis on Sunday! I think they will...I've not seen them stopped here yet. But however pretty it is I will be heartily glad when it's all GONE!

Thanks for all your comments. I too much prefer writing about snow!

Hope the pretty fairytale version lasts a while if the snow falls around your home - and that the days of horrid, frozen slush, frost & ice are over swiftly.

Gorgeous post, Penny! I love snow, and am looking forward to it tomorrow with no feeling of guilt - since we can't affect the weather, why not enjoy it?

I used to love the frost ferns on the windowpanes, too. And I love your beautiful passage about the frozen milk pushing up the foil caps!

Oh, I remember the frozen milk - and the pecking bluetits eating it. My mother used to tell me about the snow in th Riesengebirge Mountains (Karkonosce now) coming up to first floor level at her grandfather's house. They had to dig a tunnel to the front door. I like snow, but not slush or ice, and I hate clearing it. But if it's there one might as well enjoy it if one can - ie can heat one's house.

And I love the poem, have always loved it since I was small.

I loved reading this Penny - and the comments.I'm guessing you're following the Twitter stream re how snow changed history?