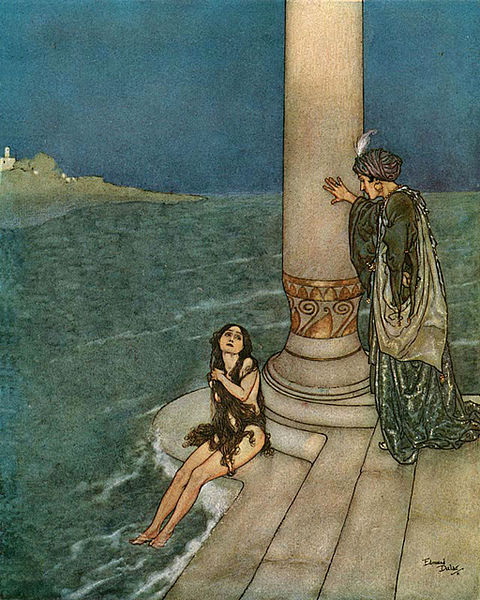 Dulac's illustration to show the little mermaid meeting the prince.

Hans Christian Andersen was the Danish author of many classic fairy tales such as The Snow Queen, Thumbelina, The Little Match Girl, The Ugly Duckling and The Little Mermaid. 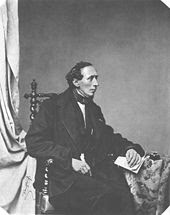 As the child of a washerwoman and shoe maker, Andersen’s childhood in Odense was one of poverty. His grandfather was said to be mad. His grandmother worked in a lunatic asylum. An aunt ran a brothel, and a half-sister was a prostitute who, in later life, attempted to blackmail her brother. His father  also used to claim that his son was in some unspoken way related to Danish royalty, though no proof of this connection has ever been found.

When Andersen’s father died, the somewhat prudish and self-obsessed son who used to play with dolls in the street while singing in a high tenor voice, left his home town for Copenhagen where he studied at the university and hoped to pursue a career on the stage. However, that dream failed to materialise, so he worked on his writing skills instead – producing novels, travelogues and poetry – and, in due course, creating the fairy tales that would lead to the fame he always craved –

‘My name is gradually beginning to shine, and that is the only thing I live for...I covet honour in the same way a miser covets gold.’ 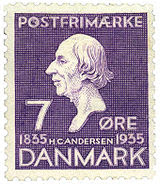 A recent Danish stamp in honour of Hans Christian Andersen

By the end of his life, the Danish government proclaimed him a national treasure with designs for a statue being made long before his actual death. He was feted by such luminaries as Balzac, Robert and Elizabeth Browning, Dumas, Victor Hugo, Ibsen, Wagner and Liszt. Charles Dickens welcomed him into his home for a visit that lasted as long as five weeks, though such a duration became a great strain. Kate Dickens called him a ‘bony bore’ and when Andersen finally left the house her husband pinned a note to the wall in the room where Andersen had slept which said: ‘Hans Anderson slept in this room for five weeks – which seemed to the family AGES.’

When it came to his love life, the lanky, gauche and effeminate writer had very little luck. He felt himself to be an outsider, and his grief for the lack of a sexual ‘companion’ is shown in this diary entry –

‘Almighty God, thee only have I; thou steerest my fate, I must give myself up to thee! Give me a livelihood! Give me a bride! My blood wants love, as my heart does!’

What he desired remained unrequited, for Andersen cultured strange ‘love triangles’ where his wooing of a sister often hid the lust for the brother. Such was the case with Riborg Voigt – a letter from whom was found in a pouch that hung around Andersen’s chest when he died. A courtship of the singer Jenny Lind for whom he wrote The Nightingale led on to her being nicknamed the Swedish nightingale. But again, the ‘affair’ was unconsummated, and while the two ‘friends’ were residing in Weimer as guests of the Duke, Carl Alexander, Anderson proved to be more entranced with their host. The two men were often seen holding hands, sobbing over their mutual adoration of the singer, and eventually such passion led to Andersen's confession that the duke -

‘... told me he loved me and pressed his cheek to mine...received me in his shirt with only a gown around...pressed me to his breast, we kissed...’

However, it was Andersen’s life-long love for a man called Edvard Collins (whose sister he also courted) that inspired many intimate letters and the tale of The Little Mermaid – a story of obsessive longing and pain, and the desire to be ‘transformed’, as expressed in another letter –

‘I languish for you as for a pretty Calabrian wench...my sentiments for you are those of a woman. The femininity of my nature and our friendship must remain a mystery.

That mystery led to great yearning. It also led to the creation of a beautiful and tragic tale - a story far darker and twisted than the Disney film version dares to show. And now that story has gone on to inspire my own imagination, with themes from The Little Mermaid occurring in my Victorian gothic novel, which is called Elijah's Mermaid. 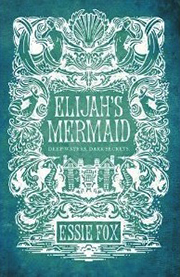 Poor man! It must have been hard being gay and not able to accept it.

"The Little Mermaid" always made me cry when I was a child - it is indeed a dark story. The HCCA tale which really gave me the creeps, though, was "The Red Shoes" - what a dreadful price to pay for a bit of relatively harmless vanity.

When I had children of my own and started to read Anderson's stories to them, I was struck by the thought that he must have been a bitter little man who didn't actually like children at all, or women either, for that matter! When seen with an adult eye many of his stories are quite frankly moralistic, misogynistic and reek of life-denying, puritanical Protestantism.

Fascinating Essie. The feeling of acute isolation in his stories, the longing - it all makes sense now...

I read sections of HC Andersen's diaries when I was researching my first novel - Between Two Seas - and based the journey through Jutland to Skagen on the one he had taken and written about. Fascinating. As you say, self-obsessed. And a complete hypochondriac too, according to the people he stayed with in Skagen. I shall read your book!

Thank you for the comments - indeed, his stories are very dark and full of such painful longing. I never could cope with the Disney version of The Little Mermaid because it seemed so trivialising. It's interesting how many of his stories are linked to water or ice as well.

A really enlightening post. Come to think of it there is an Andersenesque quality about Wilde's Selfish Giant. It must have been truly tough being gay in those days, though it's surely not easy now. I used to hate the masochism in the stories and the bitterness as a kid, but as Jane says, it makes sense now. I like his work much better now I'm grown up. Love the Dulac illustration!

Wow, thanks for posting. I'm on a Little Mermaid kick right now, so this was especially interesting!

Did Andersen know he was gay? (Assuming he was.) Perhaps he thought he was straight and so it was a mystery to him why his love affairs never worked out. If he'd been born today, his life might have been so much simpler - and we wouldn't have The Little Mermaid.

I think he knew he wanted to be able to love men freely - whatever 'freely' meant to him. He was certainly an unusual character. I wish I had more time to really investigate.

A sad story. I almost think I'd rather not know about his life - it kind of casts a shadow over the stories.