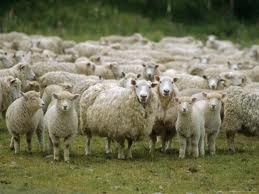 The History Girls are an impressive bunch of scholars and writers.  I sometimes worry that my lack of erudition shows up like a gorilla costume at a Buckingham Palace garden party, but then I think there must be a few readers who don't mind my dilettante tendencies. Like a dog, I must sniff at every research lamp-post I pass.

So today we'll be counting sheep. You may already have heard of Yan Tan Tether. Not the opera by Harrison Birtwhistle, but the ancient counting system. Shepherds have always needed to know how many sheep they have, whether for mediaeval grazing rights or EU livestock subsidies. Traditionally they'd count them last thing at night and again at first light, to see if any were upside down in a thorn hedge or had been taken by wolves. If there's a way to come to grief you can depend on a sheep to find it. And not surprisingly, the same system was adopted for counting stitches on a knitting needle. Knitting was a likely pastime for shepherds in the winter, when the sheep had been brought down off the moor. Perhaps yan, tan, tether was even used in large families, to do a head count of children.

Every sheep-rearing area had its own sheep counting words, all reckoned to be closely related to the Celtic Breton and Cornish languages. In Yorkshire, for instance, the words might vary a little from one dale to the next, but even in areas distant from each other similarities can be detected.

Here are the words from Swaledale, for instance. Yan, Tan, Tether, Mether, Pip,
Azer, Sezer, Acker, Conter, Dick
Yanadix, Tanadix, Tetherdix, Metherdix, Bumfit
Yanabum, Tanabum, Tetherbum, Metherbum, Jigget.
'Jigget' gets us to 20 sheep, at which point the shepherd would put a pebble in his pocket or score a line on a stick. Then he'd start on the next twenty. You'll notice the word 'score.' Sheep are counted by the score.

And just to show you an example of how it was done on the other side of the country, here's the Wiltshire version:

This lovely, idiosyncratic style of sheep-counting died out after World War One. I imagine nowadays they use one of those little clickers, like the cabin crew on a Ryanair flight. Or maybe sheep have bar codes that can be scanned. Such a pity. I think I may just have to learn one of these hypnotic and poetic lists ready for the next time insomnia strikes.

And so ends today's wool-gathering.

My father (who's from Cumbria) taught me "yan, tan, tethera, methera, pip" - only slightly different from your Yorkshire version. But I'd never seen the whole count! Thanks for a fascinating post.

I first came across this counting system in a novel, Summer Of The Great Secret by Monica Edwards. That one is set on Romney Marsh, so it must have been all over the country. It was published in 1948.

This is wonderful! I'm away to find out if there's a Scottish version - thank you for posting!

A gorilla costume is exactly what a Buck House party needs! Though, for druthers, a real one.

Loved the 'scoring a line' when the shepherd reached a score. Of course! Never saw that connection before.

Dunno about scannable sheep - but over at Authors Electric, we have some quantum sheep, courtesy of author-poet Valerie Laws.

I have NEVER heard of this strange counting rhyme! Thanks so much for sharing. I love the words like Metherdix, Tetherbum & Jigget for a score. The use of the pebble to mark twenty is great, too. I'll bet many ancient Romans and Greeks used pebbles in a similar fashion. :-)

You're not the only one prancing around in a gorilla costume, Laurie! I knew they used 'yan, tethera' etc in the Lake District - my mum and dad had it on a lampshade they'd bought from there! - but I'd no idea there were variants of it all over the country. I like it...

This looks pretty damned scholarly to me! I feel I'M the dilettante round here...maybe we can be dilettantes together. Lovely post...

Fantastic! Absolutely have to be read aloud...

Fascinating! I'm going to show my kids, because they'll relish the wonderful words, I just know it. And I'm sure they'll learn them in a trice, as I, with my sieve-of-a-brain, no longer can. Thank you, Laurie!

I only just recently learned that French numbers reflect Celtic roots where things (sheep, possibly!) were counted off in 20s - that's why you have 'quatre vingts' instead of 80.

Thank you for appealing to my geeky language/history side, Laurie!

My father was born in Wiltshire and raised in Hampshire but taught us Yan, Tan, Tethera,Pethera ...

And We took our daughters to Birtwistle's opera when they were quite young and they loved it.

Lovely post, Laurie and not at all dilettante (nor are you others!)

great post Laurie. Have to find a way to use those wonderful names. Maybe I can give scott a nickname!