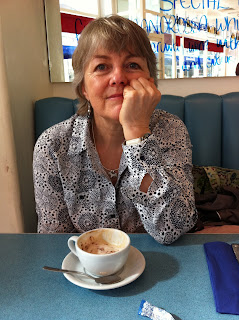 Our guest this month is children's writer Deborah White. Welcome Deborah! (If you read to the end you will discover how seriously she takes her guesting responsibilities).

Deborah White was born in Devon, but lived in an 18ft caravan on a farm in Buckinghamshire until she was three. She loved to read and write stories on her 1914 portable Corona typewriter and secretly dreamed of being an actress. She was inspired to write Wickedness after reading that Samuel Pepys went to see a preserved mummy at Egyptian exhibition in London in 1668.


I am not a historian and I never thought I would write anything even remotely historical, but a serendipitous discovery changed all that. Reading Pepys Diary one summer (as you do!) I came across an entry that referred to an Ancient Egyptian mummy (May 12th 1668. ‘And so parted, I having there seen a mummy in a merchant’s warehouse…all the middle of the woman’s body black and hard’). That little throwaway comment piqued my interest and the more I found out about knowledge of Ancient Egypt in the 17th century, the more fascinated I became. And once I had decided to set part of Wickedness and its sequel Deceit in the 17th century, of course I had to do research. Lots. I ended up with pages and pages of stuff. And I collected little snippets of information I thought I would never find a use for. (Rose Tremain was right when she said you have to do the research and then forget it or it will swamp your narrative. My first drafts were definitely swampy in places.) But one of those little snippets came in unexpectedly useful: wool smuggling. I remember being brought up short when I first read about it. Wool smuggling. Why on earth would anyone want to smuggle wool? But of course like anything, if there is an imbalance between production and need there will always be people profiting from that. (Currently one of Europe’s more bizarre smuggling rackets is the illegal importation of Chinese garlic into the EU.)

The thing was I had to get two of my characters, Margrat and Christophe (neither of whom had ‘safe conduct’ documents) from England across to France ‘under the radar’. Who was already crossing the Channel regularly and in secret? Smugglers. And when I began researching the sort of smuggling that was going on along the Kent/East Sussex coast in the 1660s, I discovered it was largely wool. Apparently by the 17th century it had reached epidemic proportions because English wool was in such high demand in France and the English textile trade was in a poor state. In 1660 it was forbidden to export wool. In 1662 the death penalty was introduced for anyone caught smuggling it. Smugglers then armed both themselves and their ships. Any attempt at arrest was very violently resisted. Why not use guns when, if you were caught, you’d be hanged anyway? (‘As good be hanged for an old sheep as a young lamb.’ This proverb from John Ray’s 1670 collection seems appropriate!) By the 1670s, 20,000 packs of wool (Say 20 fleeces per pack/bale) were being smuggled to Calais annually. That’s 400,000 fleeces a year. (The population of London was approximately 500,000 in 1666.)


The other development that made smuggling much easier, first appeared in Europe in the 15th century. This was a change to how ships were rigged. The introduction of fore and aft rigging made tacking into the wind possible. No more having to wait until the wind was in the right direction. Brilliant! The old square rigged ships could only sail when the wind direction was favourable and so were forced into using proper ports where the ships could stay safely moored up until the wind changed. But smugglers using small fore and aft rigged boats could sail into little hidden bays or even berth straight up onto a beach (as I had my smuggler’s boat do in Deceit.) Obviously this is a huge advantage when you are doing something illegal! And using prominent landmarks to navigate by (The spires of Reculver church for instance were very easy to spot from the sea…so the beach below became a popular landing spot for smugglers.)

I also found out that smugglers from around the Romney Marsh area were known locally as owlers. (According to the OED, it was first recorded as a noun in 1690. Although my second novel Deceit is set very slightly earlier, I refer to my smugglers as owlers.) 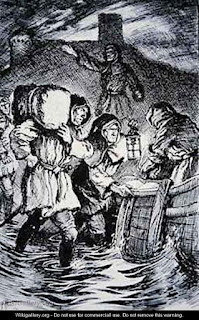 Maybe they were called owlers because they worked at night. Or because the owl call could easily be used for communication between smugglers…just as the little pewter owl token, passed from one hand to another was a sign of trust. But what a nice little bit of period detail. And dear reader…I used it! Now all I need to do is find a use for all that research into 17th century French theatre design…


You can read more about Deborah and her books at www.deborahwhiteauthor.com 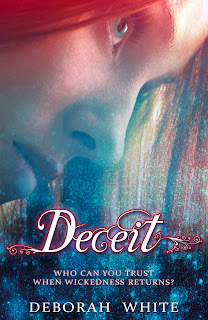 Wool smuggling! That's a new one on me. Thank you, Deborah, for that lovely bit of information!

I've come across owling quite a bit over the years (the concept, not the reality, obviously). I found references to it again when researching my next book Smuggler's Kiss which is out in March. The fore-and-aft rigging gets a mention too. The whole history of smuggling is fascinating.

That so much sprang from just that little detail! Fascinating!

Amazing! You never know what little detail will inspire a story, one of the many things I love about historical fiction--both reading it and writing it.