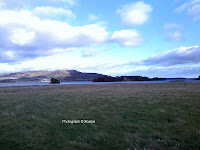 Sometimes in our minds historical figures are inextricably linked to particular places. In the case of Mary, Queen of Scots, among the many castles connected with her name Loch Leven is remembered as the place of her first imprisonment and subsequent exciting escape. Not long after her third, final, and disastrous marriage, Mary surrendered at Carberry Hill in June 1567 to the Scots Lords who had risen in rebellion against her rule. Despite being promised safe conduct to visit her infant son, she was taken at night to be imprisoned within the castle on Loch Leven, near Kinross. Her jailors were the dastardly Douglas family, implacable enemies of Mary’s current husband, James Hepburn, Earl of Bothwell

Mary had associations with Loch Leven earlier in her short reign as Queen of Scotland. One of her favourite pastimes was hawking and Loch Leven is a perennial stopover for migrating species of birds. She stayed there on several occasions with her second husband, Lord Henry Darnley, to take advantage of the hunting opportunities. 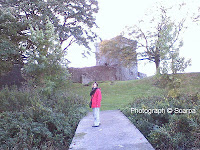 Located in modern day Perthshire, Loch Leven is a designated National Nature Reserve, one of the major sites in Europe for migratory birds. As the year ends, thousands upon thousands of birds, travelling from the Arctic Circle and northern Europe, paused to feed from the waters of the loch and the surrounding wetlands and fields. It’s a wonderful experience to see these enormous flocks of birds coming in to land, outlined against the glorious glow of a winter-red setting sun. It’s a cycle older than recorded history and when visiting the castle to research Spy for the Queen of Scots it struck me that this was a happening unchanged with the passage of time. I felt that I could block out the faint burr of the ferry boat engine and the chatter of picnicking families to see almost exactly what Mary and her companions would have seen centuries ago.  I could write a genuine witness account in as told by the main character, Jenny:

Suddenly there was a noise like the rustle of a thousand silken petticoats at a fabulous ball. Swinging and soaring above us, borne on the evening air, we heard the chittering of wild fowl as birds in their thousands came sweeping in.
‘Oh!’ I gasped in wonder.
Duncan too was gazing skyward. ‘At my home in Knoydart,’ he said, ‘there is a similar sight worth seeing in spring and late autumn. It is a stopping place for the wild geese as they travel their migration routes.’
All about us the birds came in to land on the river banks as the sun set.
‘It is quite wonderful,’ I breathed. Fiery red rays of light were slanting through the mountains. It was as though some untutored painter had released his palette upon the sky, as if God himself had dispersed a rainbow among the snow-crowned hilltops.

Another, less well known visit to the island by Mary was arranged so that she could debate with the Protestant preacher, John Knox, on the subject of whether those of a different religious persuasion, particularly Roman Catholics, should be allowed any type of religious freedom or civil rights.
Paintings of this show a timid Mary cowering away from Knox, whereas accounts from the time say that she gave him sound and strong arguments for religious tolerance. They can’t have parted on such bad terms for immediately afterwards Mary sought his advice on the marital problems of her illegitimate half-sister, Jean, and asked him to try to effect peace between her and her estranged husband. 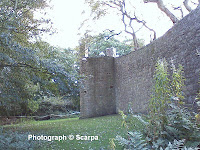 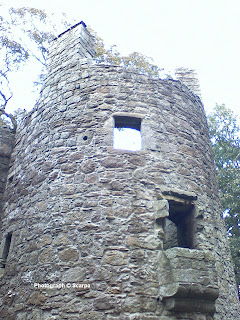 But for the many tourists who visit the island it’s Queen Mary’s daring escape after almost a year of imprisonment that attracts them. What adds to the romance of the situation is that although the rebel Lord of the Castle was her willing jailor, some of the other males in the extensive Douglas family were won over to Mary’s cause and (as they saw it) the plight of a beautiful woman being treated unjustly. The most notable sympathiser was the young lad, Willie Douglas. On a pre-arranged evening Willie, while serving his uncle his dinner, dropped a napkin onto the castle keys which lay discarded on a table. When leaving the room the boy took away the serving dishes, and also the keys concealed inside the napkin. Beckoning to the Queen who was awaiting his signal at her window in the round tower he hurried across the courtyard and unlocked the main gate. Mary crouched in the bottom of the one boat Willie had left unchained and he rowed her across the loch to where the rest of her rescue party waited with horses. 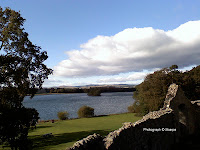 When I visited the castle I had with me a young woman, scarcely out of her teens. As we left the castle jetty I thought of Mary, not much older than this girl, separated from her baby boy, recently miscarried of twins, making the same journey, shivering and in terror of life. I shivered too as the reality of historical events came sweeping over me like the shadow of the geese passing overhead.
More info: http://www.theresabreslin.co.uk/   http://www.facebook.com/Theresabreslinauthor
Twitter: @theresabreslin1
Spy for the Queen of Scots is nominated for the Carnegie Medal and an Illustrated Treasury of Scottish Folk and Fairy Tales  illustrated by Kate Leiper is nominated for the Greenaway Medal.
In conjunction with the Citizens Theatre and South Lanarkshire schools the Divided City musical will be produced at Hamilton Town House Theatre in February 2013 and in the Millennium Theatre in the City of Derry-Londonderry in March 2013
Posted by Theresa Breslin at 00:25

What a wonderful post, Theresa...feel as if I were there. Super photos, too!

It's one of my favourite places Adèle - even without the history.

Loved this blog, despite having little or no sympathy for Mary QoS! The descriptions of the birds, and the sense of contact across the centuries was breathtaking.
Amazed that there are so few comments!

Thanks Susan, I know what you mean about Mary. I was going to do her as the 'character I just don't get' feature but when I did the research and found out about the frequent attempts to poison her from an early age (her two older male siblings died mysteriously in infancy) ,her isolation in her teenage years, and her treatment which was quite sophisticated abuse, and I thought of my own teenage girls, then I had a lot more sympathy for her. Women were so completely trapped by circumstances then, well, even now some still are....