Mary Kingsley was a model Victorian female.  She was a good little girl who lived with her parents, helped her mother with the house and her father with his hobbies and interests.  She was a good young woman who nursed her parents in their final illnesses.  And, at the age of 30, she was all set to be a good old maid, when something amazing happened.  She fell in love ... 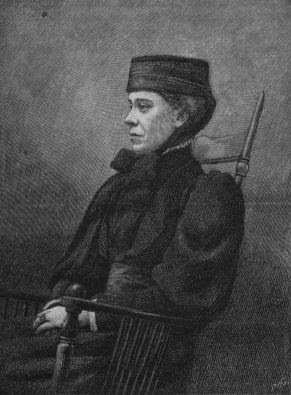 ... with Africa.  West Africa, 'the white man's grave'.  The Africa of mangrove swamps and malaria, cannibals and crocodiles, 'Fetish' and undiscovered specimens of fish.  It is impossible to do the next seven years of her life any kind of justice in the space of a blog post - this is a woman who collected insects and fish for the British Museum, continued her father's studies in pagan religions, journeyed down rivers and through swamps and up mountains, encountered - and had clear ideas of the differences between - dozens of tribes, and by the end of the her life was advising the British government on their African policies - and doing it all in a long skirt and several layers of petticoats.*  She held some views that were very much of the time, and some that were very much her own.* * And she wrote about it all with a turn of phrase as elegant as a lady's ankle.

"Now a crocodile drifting down in deep water, or lying asleep with its jaws open on a sand-bank in the sun, is a picturesque adornment to the landscape when you are on the deck of a steamer, and you can write home about it and frighten your relations on your behalf; but when you are away among the swamps in a small dug-out canoe, and that crcocodile and his relations are awake - a thing he makes a point of being at flood tide because of fish coming along - and when he has got his foot upon his native heath - that is to say, his tail within holding reach of his native mud - he is highly interesting, and you may not be able to write home about him ..."

Or, this discussion of a traveller's options, who finds him, or as it might be, herself tide-trapped in a mangrove swamp:

"Of course if you really want a truly safe investment in Fame, and really care about Posterity, and Posterity's Science, you will jump over into the black batter-like, stinking slime, cheered by the thought of the terrific sensation you will produce 20,000 years hence, and the care you will be taken of then by your fellow-creatures, in a museum.  But if you are a mere ordinary person of a retiring nature, like me, you stop in your lagoon until the tide rises again ..."

Or, the description of a chance meeting with a leopard in a storm:

"His forepaws were spread out in front of him and he lashed the ground with his tail, and I grieve to say, in face of that awful danger - I don't mean me, but the tornado - that depraved creature swore, softly, but repeatedly and profoundly ..." 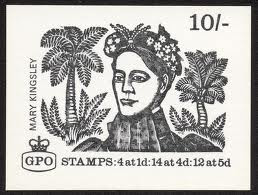 And this is what she says about this love that took over her life:

"The charm of West Africa is a painful one:  it gives you pleasure when you are out there, but when you are back here it gives you pain by calling you ... you hear, nearer to you than the voices of the people round, nearer than the roar of the city traffice, the sound of the surf that is breaking on the shore down there, and the sound of the wind talking on the hard palm leaves and the thump of the natives' tom-toms; or the cry of the parrots passing over the mangrove swamps in the evening time; or the sweet, long, mellow whistle of the plantain warblers calling up the dawn; and everything that is round you grows poor and thin ... and you want to go back ..." 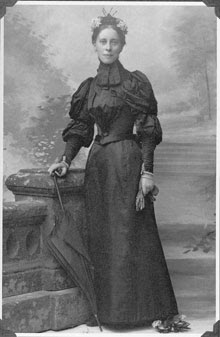 The Victorian era produced many fine, strong, distinctive voices, and hers was certainly one of them - as personal and engaging as if she were in the same room.  I wish she were!


*  Plenty of petticoats prove an excellent defence when attacked by village geese, or when falling into a fifteen-foot deep game pit studded with 12-inch spikes.  It is at these times you realise the blessing of a good thick skirt.

**  She defended, for example, the practice of polygamy - it was clear to her that women were far better off being able to share the work and the child care.  She also felt strongly that some of the tribes had intellectual strengths greater than the capacity of their language  - a kind of group dyslexia.  And she valued the work of the trader over the contributions of the missionary.

This is a lovely post and makes me feel dead nostalgic. We lived in Nigeria when I was 6 till when I was 8 and my dad always told stories about Mary Kingsley and how she looked lions in the eye and they fled from her sheer daring and Britishness! Marvellous stuff.

Love the description of finding posterity in a mango swamp. Now I must add "find out more about the redoubtable Mary Kingsley" to my list.

One of my favourites of the women explorers! I have never read her book itself, but did a lot of research for an article I once wrote about her for a children's magazine. This is a case of things that have to be true because no one could ever dream them up for fiction. Pity about her death from typhoid! :-(

Thanks, Joan! Great post. I knew Ms Kingsley was a heroine -but I never knew she was so funny! I loved the swearing leopard.

I'd never heard of Mary - weren't those Victorian lady explorers terrific! Love the sound of the plantain warblers at dawn...

Thanks for reading - she really was a corker!