If you think you've had a bad holiday... by Karen Maitland 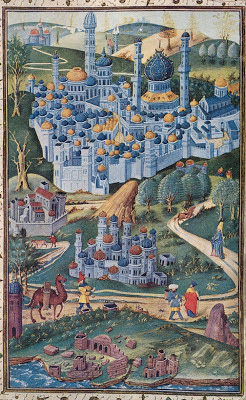 It's that time of year when a small forest of holiday brochures start tumbling through my letter box. As I’ve been flicking through them, fantasising about all the places I could go, if only I could afford either the time or money, I’ve noticed how many tours this year are based around the ancient pilgrimage routes to Jerusalem, Rome and Santiago de Compostela with visits to leather works, potteries and wine tasting thrown in.

These excursions would have been entirely familiar to the medieval pilgrims who first trudged those routes and hunted for bargains at the shrines to take home, which back then included slippers, deerskin bags, packets of dried herbs and souvenir badges.  With the recent reports of cruise ship passengers being stricken en masse with gastric bugs or attacked by pirates, it does remind you that modern travellers and medieval pilgrims still have a lot in common.


Not getting what you thought you’d paid for was a frequent complaint among pilgrims back in medieval times, just as it is as among package holiday makers now. In 1480, a seasoned pilgrim, known as Frater Felix Fabri, complained that the sea-captain who’d brought them to Jerusalem tried to charge them a ducat and 8 mercelins each for a donkey excursion which the pilgrims insisted was included as part of the ‘package’ they’d already paid for. Unfortunately, they were forced to pay up when the captain threaten to leave them behind in the Holy Land. 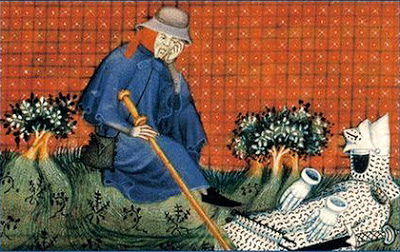 On board ship, as part of the package, captains were supposed to provide two hot meals a day including a sweet pudding and cake, an aperitif such as malvoisie, and as much wine you could drink with the meal. But pilgrims frequently complained of the wine being watered and the food being poor so they had to take their own supplementary supplies. They also had to provide their own mattresses, blankets and sheets. Although as Felix Fabri points out, there was a man in St Mark’s Square in Venice who would sell you a feather mattress and three pillows for three ducats and you could sell them back to him on your return, whatever the condition, and get half your money back.


In the early 1400’s, Venice was the port from which most pilgrimage ships set sail and, to be fair, the authorities tried their best to stop the pilgrims being ripped off. They appointed Cattaveri who oversaw the Piazza Guides stationed on the Rialto or in St Mark’s Square who were there to translate for the foreign pilgrims, help them find ships and ensure that they were not overcharged by vendors or being tricked out of their change. But the pilgrims complained that the Piazza Guides all went off together for a lunch break each day, so the authorities were forced to insist the guides took their hours’ lunch break in shifts so there was always someone on duty.
The Venetian authorities also inspected the pilgrim ships giving them a star rating in the form of crosses for sea-worthiness and also painted a cross at a particular level on the hull, like an early plimsoll line, to ensure the ship couldn’t be overladen or set out without enough ballast. 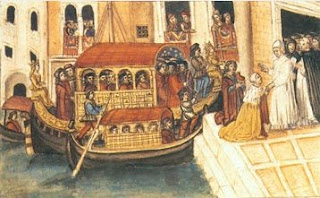 But the pilgrims’ misery really began once the ship set sail. When the four trumpets sounded for meals, the pilgrims had to ‘run with utmost haste’ to get a place at one of the tables in the poop, otherwise they were forced to eat outside in the wind or rain. They were under strict instructions not to touch ropes, or sit anywhere that a block might fall on them. They were warned not to sit on the galley-slaves’ rowing benches for fear of being beaten up by the rowers or robbed. In fact they were advised not to sit anywhere on deck unless they wanted to get tar on clothes. So the pilgrims had little to do for six weeks but get drunk, gamble and quarrel. 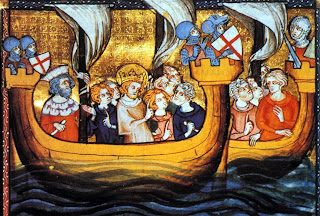 Each pilgrims was only allotted a width of one and half feet in the communal cabin in which to live and sleep, which led to furious arguments at night as everyone tried to undress and make up their beds at once. (If you’ve ever shared one of the basic cabins on some of the cross-channel ferries and all tried to dress at the same time, you’ll have some idea of the problems.)
Being a rolling ship, trapped down in a hot, crowded cabin with the foul air seeping up from the bilges, cannot have been a pleasant experience. Little wonder then, that pilgrims who were the worse for drink or insisting on talking while others were trying to sleep were a major source of irritation. And there are several reports of disgruntled pilgrims extinguishing a noisy neighbours’ lantern using the contents of their chamber pots.


The ladder leading down into the pilgrims’ cabin was removed at sunset, because of the dangers of being up on a wet deck in the dark. But Felix Fabri reports that one overweight Dalmatian priest forgot this and stayed too long on deck. He tried to climb down, but the ladder was gone, so he fell through the hatch and down into the cabin below, landing with such a crash that whole deck shook, though mercifully he was unharmed. But he then started a furious argument, accusing his fellow passengers of having pulled the ladder out from under him whilst he was standing on it.
Little wonder then that King Richard I, in an attempt to try to control the rowdy behaviour of pilgrims, drew up statutes to curb their behaviour. Penalties were severe – if you killed a fellow pilgrim you would be bound to his corpse and flung into the sea. If you injured another pilgrim and drew blood, your right hand was chopped off and if you slapped another pilgrim without drawing blood, you would be dunked in the sea three times.

But even assuming you escaped injury or death at the hands of your fellow passengers, you still had to face the hazards of pirates, violent storms, hidden rocks, contracting a deadly fever or dying of thirst when the ship became becalmed.


You know what – I think I’ll give that cruise a miss this year. I’ve rather gone off the whole idea.

Oh no! Rushing for a seat at the dinner table! Tar on your clothes! Amputation for bloody fisticuffs!

These must be some of the proverbial "worse things that happen at sea"...

Thanks for this fascinating, horrific and funny post, Karen. It will most definitely put our next holiday gripes in perspective. :-)

Thanks for this fascinating post! I don't think I would have wanted to be one of these pilgrims! And yet, there were some who were hooked on pilgrimages and made sure they ad their Compostela seashell and other " I was there" souvenirs. I can imagine someone walking around with the mediaeval equivalent of "My Brother Went To The Holy land And All I Got Was This Stupid T shirt". ;-)

Brilliant post, Karen! I always hated the idea of a cruise...

This is quite brilliant! And very appropriate as I'm thinking nowadays a lot about Eleanor of Aquitaine who must have had some kind of First Class treatment, I guess. Plus ca change eh? (no accents, sorry!) Love it! But unlike Kath, I quite fancy a cruise only it has to be a) on calm waters and b) Cole Porter type LUXURY and c) pleasant passengers. So back to dreaming. Interesting to think of the Ship of Fools in the context of such travelling. Ace!

Fascinating details, Karen, thanks very much. Love the medieval souvenirs to take back, presumably one bought them after lugging one's rented mattress back to the Square.

Could not help laughing at some of these descriptions, especially the rows over limited space (economy-class long-haul?) and the tumble down the missing ladder and the thought of that much used bedding.

Hope they all got their sins forgiven and their blessings in heaven - as well as their impressively knowledgeable tales to tell of "Well, when I was on my pilgrimage . . ." Though without the video, of course.

Did they get norovirus, I wonder? I guess at least the survivors felt they had earned the distinction of being returned pilgrims!