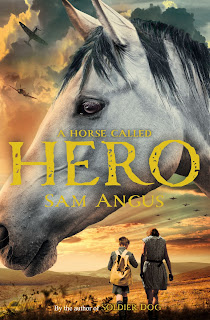 Our guest for August is Sam Angus:

Sam Angus was born in Italy and grew up in France and in Spain, in the final years of General Franco’s dictatorship. She read English Literature at Trinity College, Cambridge and went on to study fashion at Central St Martin’s College of Art before setting up her own sportswear label, Sam de Teran.

After having her first child Sam returned to her first love, literature. She now writes full-time and lives between Exmoor and London with her large family, dogs and horses. Sam’s peripatetic childhood inspired a love of travelling and of history and she was once held hostage in the Guatemalan jungle by armed guerrilla fighters.

Soldier Dog, her debut novel about the Messenger Dog Service, was published in 2012 to great acclaim and won the North East Book Award. Soldier Dog has been selected as one of only 17 books for Booktrust’s Bookbuzz programme and will be distributed to every participating secondary school in the UK throughout Autumn 2013. 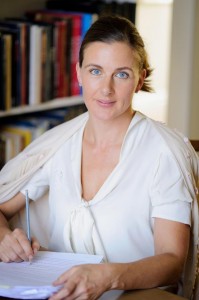 Welcome, Sam, and over to you:


As I write this post for the History Girls, I am taking a break from my research into an arcane area of World War II for my third historical adventure novel to be published next year. My second novel, A Horse Called Hero, set in World War II, is published this week but it’s my first novel, Soldier Dog,* about the Dog Messenger Service in World War 1 that I want to write about today.

I don’t consider myself a historian, I feel as though I was drawn into history and into writing rather accidentally. At a moment when I wasn’t either planning on writing a book or changing career, I heard a story on the radio. That story has completely changed the direction of my life. I was sitting in blistering heat, heavily pregnant in a traffic jam on Park Lane in London, but the story that I heard sent a shiver down my spine. The radio programme was about the animals who’d given their lives during the Great War and was broadcast around the time that the memorial to them was erected on Park Lane. Through my car window I could see that memorial as I listened.


I’ve always had a hopeless and helpless love of dogs and once even had to choose between my university career and my dog [when he was discovered living in my rooms at college] and I have always found stories of their love for their master deeply moving but I’d had no idea at all, and I believe most people in this country haven’t, that dogs had worked in battle as messenger dogs in the first world war.

This was the story that I heard.

An Airedale, named Jack, recruited by the British Army from the Battersea Dogs Home and trained at the War Dog School, was sent out to the Western Front. Jack’s battalion came under heavy fire. If the entire battalion was not to be wiped out, it needed reinforcements and ammunition. No human runner would survive the barrage of gunfire in order to get a message out. One Lt Hunter slipped a message into the Jack’s collar and said, “Goodbye. Jack. Go back boy. ”

Jack ran off, staying close to the ground, taking advantage of whatever cover there was, running through deep swamp for over half a mile. Under heavy bombardment he began to get hit. A piece of shrapnel smashed his jaw. The battalion watched Jack stagger on. A missile ripped open his black and tan coat from shoulder to thigh, but still he continued, using shell holes and trenches for cover. His forepaw was hit and he fell. Jack rose, dragged himself along the ground on three legs for the last few miles, persevering, inch by inch, until he reached his master and fell dead at his feet, his jaw broken, his leg splintered. Airedale Jack saved his battalion that day, and earned himself a posthumous VC. 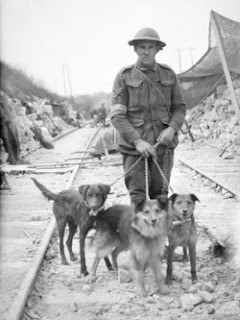 Before the moment I heard these stories, I hadn’t known that there’d been seven thousand dogs killed in the Great War. I hadn’t known that they’d served as sentinels, scouts, sentries, ambulance and messenger dogs. I heard stories about other animals, sitting there in the traffic on Park Lane, but it was the idea of the messenger dog, of his intelligence, loyalty and of the sense of duty that could draw a dog through gunfire, back to his master, that brought tears to my eyes and eventually brought me to take pen to paper and write the book that became Soldier Dog.

As with many female historians and writers of historical fiction, it’s the human side of history that I am drawn to. The individual stories, the individual letters and diaries and memoirs, these are the things that keep drawing me in. If there are animals involved in these individual stories too, then they are so much more moving because the men's fondness for the animals that served with them allowed a softer side of their natures to show - there are no women or children in the trenches in WWI or WWII - so there was no outlet for tenderness other than with their animals.

I once caught your presentation at a school. The story of dogs serving at wartime is so moving and mind boggling ... I had no idea. Thanks for this.

I once caught your presentation at a school. The story of dogs serving at wartime is so moving and mind boggling ... I had no idea. Thanks for this.

Really interesting and moving post, thanks. By the way, did you know that a one past master of Trinity College kept a dog in the Master's Lodge, and that was against regulations .... so that particular dog was deemed to be a cat, and the problem solved in a very Trinity way!

Hola! I've been reading your site for a long time now and finally got the courage to go ahead and give you a shout out from Kingwood Tx! Just wanted to mention keep up the fantastic work!

I’m planning to start my own blog soon but I’m a little lost on everything. Would you suggest starting with a free platform like WordPress or go for a paid option? There are so many choices out there that I’m completely confused .. Any suggestions? Thanks a lot!
_____________________________
Henderson Dog Training