Home (is where the stories are) by Imogen Robertson 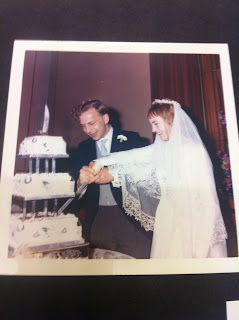 Forgive me, fellow History Girls! It’s going to be a short post from me this month. I’m up in my home town of Darlington celebrating my parent’s Golden Wedding Anniversary and between the champagne and the buffet preparation I haven’t had a lot of time to think about writing historical fiction.

That’s not entirely true. My parents have lived in the same house since they married in 1963, and have filled it with photo albums, letters, furniture and assorted ephemera from both sides of the family. The original inspiration for Paris Winter was an album of pictures belonging to my father’s mother taken while she was on holiday in Vienna before the First World War.

Last night after dinner my father fetched another folder from one of the cupboards. It contained my grandfather’s notes about the business he hoped to start when he got out of a prisoner of war camp. He was captured at Ypres in 1917. The folder also contained a very beautifully printed programme, complete with photographs and full text, of a play the French prisoners put on in the same camp. It was a reminder of the difference between the way the officers and men were treated once they were captured during that terrible slaughter.

My grandfather eventually became a furniture remover in Darlington, he came here to recover from the Spanish Flu under the care of his sister who was the first Lady Doctor in the town. Dad took over the company when he was 21. He also took over his father’s employees, including a man who had been forced to work in the salt mines as a prisoner during WWI. He never lost the profound stutter he developed during the war. Perhaps I haven’t done with the family archives yet.

My parents gave excellent speeches, and took great delight in telling their groaning younger relatives that they bought this large and lovely house for £4,500 and a free removal. Having got married last year though the thing that really stung me was the bill for the reception photographed below. Yes, the total for feeding and watering 140 guests was just over £186. Thought it might be handy for anyone writing about high life in the sixties. Cheers! 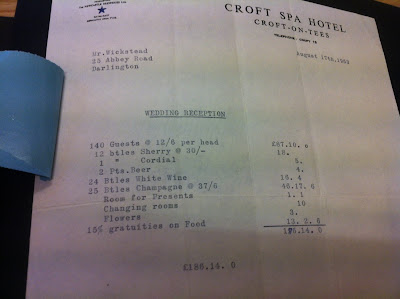 My folks married in 1967 and last moved in 1971 for the vast price of £7,000 and still live in it! and yes somewhere my mother had her bill for feeding the wedding guests, sadly a mouse infestation destroyed a lot of the 'forgotten' archive! but I know she would still know how much it was, she is like that!
So nice to hear mine isn't the only hoarding family!

My folks married in 1945, right after WWII, in an upstairs room at the college my mother attended. I think my sister has the photo. You've reminded me to get a copy from her!