As a historical biographer, I aim to capture the spirit of people on paper. And yet my latest subject, Krystyna Skarbek, aka Christine Granville, has taught me to respect her freedom too...

Slavers, dictators, murderers and biographers have all claimed ownership over the lives of others. It’s an unfortunate milieu, but not every biographer chooses to represent their books as the ‘definitive’ account of their subjects’ lives. Not only is it impossible to know that you have nailed down every fact, your selection of nails is equally subjective, as is the force and direction with which you choose hammer them home. Arguably the more ‘definitive’ a biography is hyped to be, the more ‘defined’ it probably is - by its author rather than its subject. There is nothing wrong with this, as long as it is understood. Biographies have long been considered as mirrors of their authors’ times and preoccupations as much as windows on to the lives of their subjects, and plenty of biographers since Lytton Strachey, with his Eminent Victorians, have made a virtue of their overt subjectivity. But then, perhaps this is as much an imposition as claiming to own the truth of another’s life. The real problem, perhaps, is how to balance the good biographer’s compulsive need to ‘possess’ their subject with the equally vital need to respect them.

I felt this dilemma particularly strongly when I started researching the life of Krystyna Skarbek, aka Christine Granville, Britain’s first female special agent of the Second World War. Christine was not a person to be owned, or even easily defined or contained. My biography is called The Spy Who Loved because she was a very passionate woman, loving life in its widest sense. She loved adrenalin and adventure. She loved men; she had two husbands and numerous lovers. But most of all she loved freedom and independence: freedom for her country and freedom for herself.

It is ironic then, that I soon discovered a wealth of people, mostly men, who had laid a claim to her both in life, and to her story after her death. Christine was not only the first woman to volunteer for Britain as a special agent, she was also the longest serving, taking on mission after mission in three different theatres of the war. That she died young is perhaps unsurprising, but Christine was not killed in action – she was murdered by an obsessed stalker in the lobby of a London hotel in 1952. Reportedly, as he was led from the docks, Christine’s killer, Dennis Muldowney, claimed that ‘to kill is the final possession’. But Muldowney was wrong. He had never possessed Christine in life, however intimate they might have once been, and he failed to stake his claim through her murder.


Devastated by his ultimate failure to protect her in person, Christine’s long-term lover, soul-mate and colleague-in-arms, Andrew Kowerski-Kennedy, dedicated much of the rest of his life to defending her reputation. In effect this meant representing or re-writing her life-story. During Muldowney’s public trial, Andrew arranged for a statement to be read out asserting that there was ‘not one particle of truth’ in Muldowney’s claims of intimacy with Christine. Thereafter he convened an all-male group of her former colleagues and closest friends as the ‘Panel to Protect the Memory of Christine Granville’, essentially by preventing any unapproved books or articles about her from being published. They proved effective. An anticipated screenplay by Christine’s old friend Bill Stanley Moss, best known as the author of Ill Met By Moonlight, was quashed, preventing a production that might have starred Sarah Churchill, Winston’s daughter, as Christine. Twenty years later a lyrical memoir by another former lover, Count Wladimir Ledochowski, also failed to win approval, and remained unpublished (although not lost).

Much of the reason why Andrew was so protective was that Christine had led a very active life on all fronts. However much he adored her, Andrew seemed to feel that the polite world was not yet ready to embrace Christine in 1952. Another reason might have been that many of the members of his panel had not only been in love with Christine themselves, they were also married, meaning that in several cases there was more than one reputation at stake. Eventually, in 1975, Andrew agreed to support a biography of Christine by Madeleine Masson, essentially taking over the narrative drive himself through a series of personal interviews. Despite the pleading of some of the women who had known Christine, such as SOE’s Vera Atkins who told Masson not to ‘diminish her by white-washing her faults’, the book presented a thoroughly scrubbed and sanitised version of its subject. 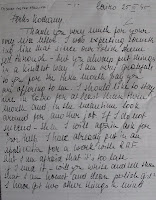 Having pieced this back-story together it was a great relief to me when I started my research, that Christine’s remaining friends and colleagues, and the descendants of many more, were so supportive of the project, pulling out letters and photographs, medals and jewellery, and sharing memories and anecdotes over sandwiches or over the internet. Even the nephew of her murderer kindly shared what he knew. Clearly people were keen that Christine should be remembered and celebrated in what is hopefully a less judgmental age. And yet, even then, I faced aggressive phone calls and on-line postings from three male writers who laid claim to Christine’s story. Christine was still mesmerising admirers, and it seemed they still did not understand that she never willingly entered into an exclusive relationship.

I used a glorious number and variety of sources to inform my book, including interviews; official papers – some retrieved under the Freedom of Information Act; wonderfully personal letters to and from Christine – most previously unpublished; school reports; beauty queen photos; press articles and film clips; artefacts including her commando knife; published and unpublished memoirs; histories; and even novels written by some of the people she knew. When the hardback came out, I was thrilled that several more people who, or whose parents, had known Christine, now also got in touch. Some even told me new stories or details, the most pertinent of which are included in the paperback.


And yet I know that my biography of Christine can never be definitive. No one ever possessed Christine. Not her parents. Not her two husbands, nor any of her lovers, and certainly not her biographers. If she was possessed by anything it was her drive to free her country, and to live a life of freedom herself. Christine’s defining passion was for liberty: in love, in politics, and in life in its widest sense. No self-respecting biographer could claim to capture her entirely; her spirit defies it.

I'd never thought of biography in quite this way before - thank you for an interesting post!

Interesting thoughts about the nature of biography - and what a fascinating subject! Am off to order this...