SO RIGHT, IT'S WRONG by Eleanor Updale


Historical drama on film and TV often gets a pasting, but there can be little doubt that the level of accuracy in the sets and styling has improved immensely over the years.  We no longer have 18th century heroines with bobby pins in their hair, or sixteenth-century swashbucklers fighting it out beneath nineteenth century portraits.  These days there are specialist advisors on everything from the look of the food to the species of flowers in the front garden.  I haven’t seen the latest film of Great Expectations (which I gather is less than wonderful) but I bet it has avoided the clanger dropped in the opening minutes of almost every other adaptation: making the gravestones of Pip’s parents look a century old at least.

But can design accuracy go too far?
I was prompted to think about this close to the northernmost point in mainland Britain (which isn’t John O’Groats .  You learn something every day).
Near Dunnet Head in Caithness, I visited Mary Ann's Cottage. 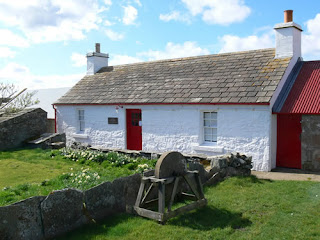 It's a rare thing these days – something from the past that hasn’t been tarted up.  Mary Ann’s Cottage is a country croft, built in about 1850, and preserved exactly as it was when the last member of the family left it to enter a home in the 1990s.  At the last minute, and with the help if the Queen Mother (who lived at the nearby Castle of Mey) the cottage was rescued for the public despite the local council’s demand that it be sold to pay Mary-Ann’s care home fees. 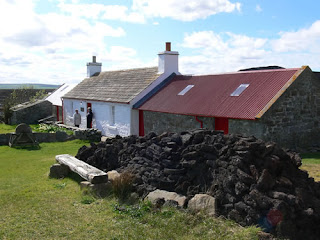 Mary Ann’s Cottage is nothing like those ghastly places where actors dress up and put on funny voices in an attempt to bring the past to life.  What's thrilling about the croft is that nothing has been done to achieve a ‘period’ feel.  There are plenty of ancient domestic and agricultural artifacts in the house and its outbuildings, but alongside them is a 1960s dial telephone, a budgie’s cage, the graduation photo of Mary-Ann’s son, magazines and newspapers recording events in our lifetimes, and spartan home comforts many of us would recognise.  The custodians have politely declined donations of period objects to make the croft seem more ‘authentic’.  As a result, we are given a convincing picture of what it was like to live there.  Above all, it’s a useful corrective to the view that crofting was always an unremittingly harsh existence, lived out by the victims of oppression.  It was the family’s choice to live in this way, and in a simple sense, they lived well.

You can read more about Mary Ann’s Cottage at http://www.caithnessandsutherland.com/mary-ann-cottage-caithness-croft-museum/  Which is where the pictures in this post come from.

Mary-Ann’s Cottage is an example of how a home is an organic thing.  While retaining much of its 19th century character, the later layers are just as important in telling its story.  The same is true the other way round.  Our homes today are full of unnoticed reminders of the past, and the TV designers should bear this in mind for modern-day dramas, too.
Unless you happen to be a Russian billionaire or footballer’s wife decorating a new-build with the help of an interior designer, it is highly unlikely that your home is composed entirely of objects manufactured this century – let alone this decade.  Anyone filming a TV drama set in 2013 is likely to be tempted to show a fancy boiling water machine, a shelf full of Jamie and Nigella, and and ipad on an onyx worktop.  But they should have the courage to include the 1980s Laura Ashley wallpaper still in the loo, the threadbare carpet 1970s carpet on the stairs, and the ancient transistor radio beside the bath, too.
No doubt such ‘anachronisms’ would be likely to draw complaints from people who love looking out for ‘mistakes’, but a courageous designer will know that the only things that should be prohibited from the set are those that were uninvented, or unavailable, at the time of the plot.
Those can really put the audience off.  I remember losing faith in Mad Men during the very first episode, when someone pulled on pantyhose more than a decade before they were on sale.  Any British drama set in the mid-sixties is likely to put every woman in a mini skirt and kinky boots. Though these were featured in magazines like Honey and Petticoat at the time, in most of the country (and even in most of London) they were nowhere to be seen.
One of the most meticulously ‘accurate’ TV shows is the achingly art-deco Poirot.   Oh so very very right.  But somehow somewhat wrong. [For copyright reasons, I can’t show you a screenshot to illustrate what I mean, but you can always watch an episode to find out.]

So yes – please film period drama well away from the flight path, cover up the double yellow lines and remove the parking meters where necessary.  But don’t take away the horse-trough and water fountain just because they were placed there 100 years before your story is set.
It will always be fun to watch out for a medieval extra wearing a wrist watch, but we should be more tolerant if a character in Pride and Prejudice sits down on a chair made, and bought, half a century before she was born.
www.eleanorupdale.com
Posted by Eleanor at 01:30

It's an interesting point - but oh, it makes it even more complicated! I know this is heresy, but provided somewhere looks reasonably right, I'm okay with it. Of course, we're much more demanding if we can actually remember the era. I well remember the excitement when tights first came out in the late sixties, and so I'd notice if someone was pulling them on several years earlier - but isn't it a bit much to ask writers who weren't there to know such detail? And how are we to know whether the fashion at King Alfred's court was for pointy-toed boots or round-toed ones - and whether it changed between 879 and 888?

This is something I've thought of so many times, you put it so well!

As a historical interpreter at the Perkins Mansion in Akron Ohio, I love that the house is no longer perfectly Victorian. Sure it was built in 1829, but the family lived there through the 1940s.

As a writer of historical fiction, I'm very carefully researching every detail of my story and working with other historians, through http://1890swriters.blogspot.ca/ , to make sure I get everything right.

Thank you, I love Mary Anne's cottage for its truth, the warm touches that make you realise it was a home! the things from before, worn and loved, my mums house was built in 1971 but in hung a picture rescued from France after the war dating back to 1800's and a wonderful early 1900's wooden pedestal which still stands in the hall, though the painting now hangs in my house which is mid 1700's :-)If you recreated my home you wouldn't have the latest Ipads etc but we do have notepads and laptops, no satellite dish for us, and until digital we had 4 channels! but watch most of our news live stream via wifi. a modern sofa with a stool hand made in the 1060's by my late father in law based on an 18th century design he liked! Only show homes and the very vapid are only set in one time. Thank you for making this so clear.

Surely BEFORE is OK? It' s only if it's after, like the tights, that it matters. The horse trough and the chair are like your Laura Ashley wallpaper and the transistor radio.

Pantyhose first appeared in 1959. The brand was called "Panti-Legs", made by Glen Raven Mills. The only anecdote of a woman actually wearing them this early in their history was that of Sally Rand, the exotic fan dancer. Ms. Rand allegedly purchased every pair of Panti-Legs brand pantyhose she could get her hands on. She is also alleged to have written to Glen Raven Mills to complement them on their wonderful product, and to beg them to please make more. Pantyhose showed up in both the Sears and Alden’s catalogs in 1960, so while pantyhose were technically available from 1959 on, early pantyhose wearers were very few and far between. The very next pantyhose-wearing anecdote I could find on the Internet dates from 1963.

When I first saw Peggy in her pantyhose, it was part of a montage showing some of the Madmen ladies getting dressed in the morning. Bras, girdles, and garter straps holding two-piece stockings were shown. Then we saw Peggy slip into her pantyhose very quickly and gracefully, as if to indicate that pantyhose were her everyday choice for hosiery and NOT a new or “novelty” choice. If Madmen had shown Peggy in a scene in the hosiery section of a department store, asking the saleslady what was “new” in hosiery, the authenticity would have been on more solid ground. The saleslady could have shown Peggy a pair of Panti-Legs. Then when Peggy put on pantyhose for the first time (presumably with some awkwardness instead of feminine expertise), the new/novelty aspect would have been clear, again assuring authenticity. Since Peggy later took over the Topaz Pantyhose account, she could have mentioned that she was an early convert to pantyhose and added her assertion that pantyhose would some day replace two-piece stockings forever. Another scene could have shown Peggy adjusting her pantyhose in the ladies room while Joan looked on. Joan could have asked her about them, and rebuffed pantyhose as “never catching on”, to which Peggy could have knowingly replied “Oh yes they will”.

Of course, none of these scenes appeared, so we are left with an awkward stretch of historical fact since pantyhose were technically available but also quite novel and extremely rare. I should also note that Elisabeth Moss told Bonnie Hunt on her talk show that all clothing was appropriate and authentic for the period. Ms. Moss then quickly remembered that pantyhose were an exception. She explained that the quality of early pantyhose was poor, so modern pantyhose was used, instead of pantyhose accurate and authentic for 1960-1961.