On Broken Bones and Libricide, by Laurie Graham

I don’t know if it’s just me but I find it very hard to revisit a book after it has been published. It’s something authors have to do, if for some reason there’s renewed interest in the book or, as in my case this month, the mass market paperback is being launched and one must be prepared to answer questions. Re-reading A Humble Companion a year and a half after I finished writing it I find all kinds of unsatisfactory things. If only I’d gone into that a bit more, I think to myself. For instance, Nellie Buzzard’s broken wrist.


The winter of 1829/30 was a peculiar one in London. Snow fell as early as October, then thawed and by December the weather was strangely mild. A second, real winter began in January. But it was in the October snows that Nellie went walking about, contrary to all advice  -  she was by then at the advanced age of 54  -  and fell. Nellie wasn’t a wealthy woman but she could certainly have afforded a surgeon. But people were falling like skittles on the treacherous streets and there wasn’t a surgeon to be had.


In the case of a fracture, if a surgeon wasn’t available the next best option would be a blacksmith or a bone-setter. Nellie ends up with Jane Bunney, a bone-setter past her prime. Bone-setters were often women in spite of the great physical strength required to deal with, say, a leg fracture. It takes a lot of sustained traction to pull the powerful leg muscles back into position before the bone ends can be set. Fortunately for Nellie I gave her nothing worse than a broken wrist and allowed Mrs Bunney to attend to her relatively unimpaired by the contents of a gin bottle. How we novelists do play God! 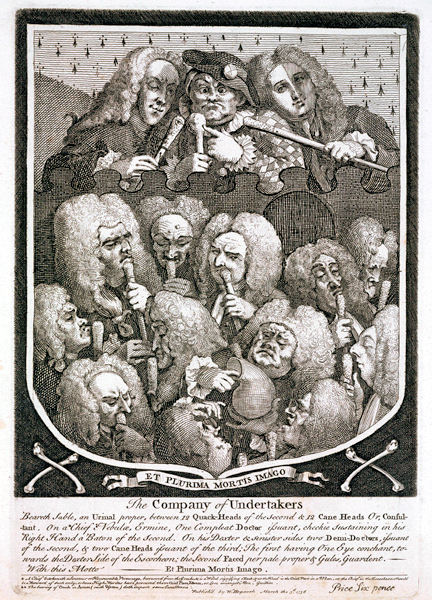 One of London’s most famous bone-setters was Sarah Mapp, who had learned her trade from her father. She features, top centre, in Hogarth's Company of Undertakers. Mrs Mapp set up in Epsom for a while, in the mid 18th century, and made a good living there treating people who fell off their horses. She later moved to London. But by Nellie’s time bone-setters were being elbowed out of business by the increasing professionalization and regulation of medicine. Sarah Mapp ended up so destitute she had a pauper's funeral.
Sir Percivall Pott, a leading light of 19th century fracture treatment dismissed bone-setters as being little more than savages. But Nellie, desperate for help, settles for what she can get. She was lucky that while she waited for Mrs Bunney she at least had access to ice, to help reduce the swelling. Nellie’s husband’s Oxford Street confectionary establishment had an ice pit in its yard.


How to immobilise a fracture? In 1829 there were no gypsum rolling bandages. Improvisation was called for. In Nellie’s case, strips of an old flour sack dipped in egg white. It’s little wonder sepsis was such a common problem in fractures where the skin was broken too. And for splints? Whatever was at hand. Nellie authorises the use of the end boards of Marchmont, a novel by Charlotte Turner Smith, on the grounds that she didn’t care for the book and would never read it again. This is perhaps the moment for me to apologise to the spirit of Mrs Turner Smith. My character’s aversion to her novels is no reflection on the quality of her work. They were simply too sentimental for Nellie’s taste, with too many delicate heroines waiting to be saved by valiant heroes.


Nellie Buzzard is a writer herself. That’s why I permitted her to order the libricide of Marchmont.  It’s no bad thing for any of us writers to be reminded that our life’s work may end up, if not as a fracture splint then as a doorstop. Or even a fire-lighter.
A Humble Companion, published by Quercus, Aug 29th, price £7.99
Posted by Laurie at 01:00

Congratulations on the paperback launching and thank you for the broken bone tidbits!

Hey guys, how about checking out my blog?
Name: Beautiful girls,
http://sweet9teens.blogspot.com/