Name that prince(ss)! by Mary Hoffman

Bear with me. I know many of you will be sick of the subjects: Royal baby; naming the Royal baby etc etc. There's a new baby in my life, my first grandchild, born less than three weeks ago in Mexico  three weeks early. There has been much family comment about her name and much discussion about what constitutes an acceptable baby name.

So that, plus certain events in the family I still think of as Saxe-Coburg-Gotha, and the awakened memories of writing my own "names book"* have prompted this post.

One of the things I discovered when writing my book is that men have a much smaller name pool than women and girls tend to be more elaborately named than boys. Imagine how much smaller the pool of of Royal baby names must be!

William Hill were giving "George" odds on by the time the new Prince's name was announced. Immediately, a Facebook friend, another writer, jumped in to say that all the King Georges in England so far had been a dodgy lot.

If this new baby does inherit the throne (estimated as not before 2065, so I don't have to give it too much thought), he will be George Vll. Or not. Because George Vl, the Queen's father, was baptised Albert Frederick Arthur before the George and known in the family as "Bertie." Edward Vll, pictured above, had the first name Albert, like his firstborn son.

George V really was called George and Edward Vlll really was Edward (but he had seven forenames to choose from).

Queen Victoria's first name was Alexandrina; so all those knick-knacky sitting rooms might have been described as Alexandrine.

Victoria and Albert had to do the "name the Royal baby" thing nine times: Victoria, Albert (Edward), Alice, Alfred, Helena, Louise, Arthur, Leopold, Beatrice. Obviously they did not worry about having five children with names beginning with "A." Presumably they had people to sort out any confusion with the Royal Mail (or Royal Male).

Arthur has remained popular with the Windsors. Prince Charles is Charles Philip Arthur George; Prince William is William Arthur Philip Louis.  But Arthur was never a very likely first name for the new Prince; it is ill-omened. Henry Vll and Elizabeth of York's first son Arthur died as a teenager not long after marrying Katherine of Aragon and that gave us Henry Vlll and all the problems of his marriages and heirs. (Henry lX was not really on the cards). And it was not just Shakespeare who thought King John was responsible for the death of his nephew Prince Arthur, who was the son of his older brother and had a better claim to the English throne.

Richards have died out in the English Royal line since the third one, with the bad reputation, and another Edward is unlikely as long as the abdication crisis lives on in books and TV programmes.

James was perhaps a bit more likely: there have been only two of them although the second one was forced to abdicate:

The first one was actually called Charles James. You see how the Royals ring the (not many) changes. If Prince Charles inherits the English throne, will he be Charles lll? There are many Jacobites still who think that would be irregular and insulting to the Young Pretender, Bonnie Prince Charlie. But remember the current Charles could choose Philip (unlikely: we've not had a King Philip since Mary Tudor's consort and it sounds very continental), Arthur (see above) or George, thereby perhaps scuppering his grandson's choice. Perhaps he will fix on a name he wasn't given at birth, such as Louis? But I fear King Louis is just too French for the Windsors.

One thing we can be sure of is that if the new Royal baby had been a girl, there would have been a more unusual group of names. Or can we? The Princess Royal named her daughter Zara and her son, Peter, has daughters called Savannah and Isla. Maybe the further away from the throne you are, the more elaborate your name can be, so perhaps even a Princess of Cambridge would have been stuck with variant orders of Elizabeth, Mary, Anne and Victoria.

The sentimental hope of many Brits that she would have had Diana among them will have to lie dormant till next time.

Katharine Grant (K.M.Grant) wrote about changing her name and choosing characters' names on 28th July, her final post for us. We are sorry to lose her and thank her for her sterling work as a History Girl and Admin.

Tell us what you think of Royal baby names, if you have a view.


* Our Names, Our Selves by Mary Lassiter (Heinemann, 1983). Note: I changed my own name to publish this book, using a family surname, as my publishers panicked at the last moment that I was too associated with children's books - even then. 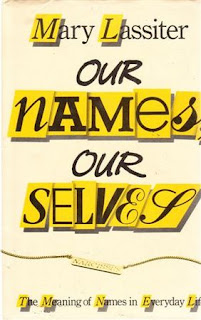 Fascinating! My hunch/hope for a girl was Alexandra or Charlotte - since one of the Queen's middle names is the former, and the latter is a nod to Grandpa Charles... And then I felt, following on from that, that Alexander might well make an appearance somewhere if it was a boy. I would have loved them to branch out with the first name, but didn't honestly expect it. By the way, wasn't Princess (later Queen) Alexandra beautiful! And many congratulations to you, Mary, on your grandmotherhood!

That's interesting about the varying size of the name pools for boys and for girls - I never realized that! Thanks for the post!

What a great post. I love your musings about why certain names wouldn't be appropriate, at least not just yet. You are so right.