If you are easily grossed out – do not read on!

My grandfather kept hens – not just for the eggs but also for the pot. I can’t recall actually watching him dispatching a favoured fowl for dinner, but what I do know is that there was great competition among the grandchildren for the ‘Claw.’ Grandad would chop off the hen’s leg and peel back the skin to uncover the gleaming white tendons. He’d prise these loose and tie lengths of fishing gut to them. Whoever’s turn it was to have the Claw had enormous fun rushing about threatening siblings, cousins, neighbouring children and a good few adults with the yellowed grizzly talons. Holding it in one hand and manipulating the strings with the other was even more pleasurable, especially if you could sneak up on someone unawares and stroke their cheek, or grab a lump of hair. Creeping along the corridor to my older sisters’ bedroom as they lay chatting at night, scratching on the panelling, then sliding the Claw round the door edge and scrabbling at the light switch to switch it off, with accompanying awful noises, resulted in very satisfying screams. On one occasion my Claw was confiscated for overuse. My parents ignored protests re the value of scientific research, thus crushing my early interest in working models of anatomical function. I was broken-hearted. Relenting a little, they arranged to have it preserved in a jar of formaldehyde.

The games we played, eh? Modern electronic entertainment like ‘Assassin’s Creed’ and ‘Minecraft’ which are said to be rotting kid’s brains with mindless violence ain’t got nothing on a real, dead, blood-encrusted, scaly-skinned, reptilian-look-alike Claw.
Health & Safety, my eye.

It may have been those childhood experiences, or, when I was a bit older, seeing the Leonardo da Vinci’s fascinating red-tinted drawing of a foetus in the womb, that made me develop a life long interest in the subject. It can cause others to go off their food but I found that aspect of my research into the life of Leonardo da Vinci for The Medici Seal fascinating. In Florence, right next to the Pitti Palace, is a scientific museum - La Specola.  Opened in the 18th century it was unique in that it was intended for the public to have access to see the exhibits. In the basement are cases of wax bodies sliced open to show the internal organs. The works are by several wax sculptors created over the centuries. Some have been treated in a method believed to be similar to techniques used by Leonardo to map out the human venous system.
Not for the faint-hearted.

Wanting to write actual scenes of dissection I went to the University of Pavia where Leonardo da Vinci worked with Marcantonio della Torre during 1510 and 1511.
The Spanish edition of The Medici Sea has a cover which reflects this aspect of the book. 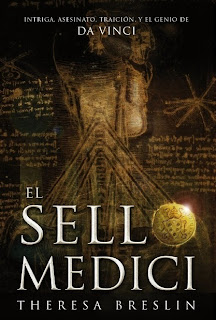 Thirty sheets of drawings made by Leonardo during his time in Pavia are on display now at the Palace of Holyroodhouse in Edinburgh until 10th November 2013. What adds an extra dimension to this exhibition are the computer simulations and body scans using advanced technology. These reveal how accurate Leonardo was in depicting what he observed, not just in the most beautiful and precise form, but he also noted the correct function of the various parts.

If I can find it I could tender my preserved Claw for loan as a hands-on working model, but I’ve got a feeling the Holyroodhouse Exhibition Curator might just decline my offer

My grandmother grew up in the western United States of pioneer stock. When she was a little girl, her older sister used to chase her around the house with a chicken's foot, too.

Good to know there's someone out there who shared my disgusting childhood habits!

In the science museum in London there used to be fab displays of old instruments for doctors and midwives, I remember being about 7 or 8 and allowed to roam the museum without my mum or dad watching over me (what harm can she come to! HA) and finding the 18th century and older birthing stools and other such strange items, early forceps and other tools now seen as potentially fatal.
The bowls for blood and other things, the saws for amputation, I had such a wonderful but ghoulish time, sadly in the modern sound bite age of walk through museum displays much of what I saw is not longer out and what is has almost tabloid style display. Mind you my local butcher decided I was too curious and took me through to his back table and with my mum watching on showed me how he skinned and gutted our dinner (which I couldn't then eat) of Rabbit caught locally!
Ah the good old, bad old days, wish I had a claw though :-)

Thanks Adèle. Hello Ruan - what a gorgeous name! Yeah, I agree, Lots of truly gruesome exhibits seem to have disappeared from Museums - probably due to Health & Safety restrictions. Love your story about the local butcher, I've a vision of him, with meat cleaver in hand!