Other Women, The History of the Mistress - A review by Leslie Wilson 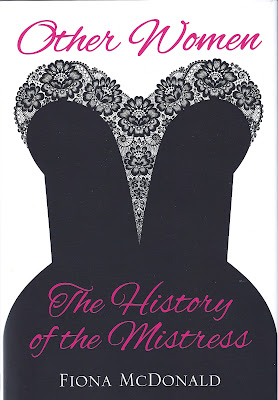 Mistresses - it should be a topic alive with interest, and the jacket image is designed to be piquant - a black lace-edged dress suggesting opulent breasts (but no face, which has distasteful resonances of pornography). The title: THE HISTORY OF THE MISTRESS suggests that there might be some analysis here, some consideration of why women have chosen, or been forced by circumstance, to become Other Women and get their love-life - and often their financial support - from the other side of the official blanket.

I came to this book fresh from reading Claire Tomalin's wonderful MRS JORDAN'S PROFESSION, Frances Wilson's equally fascinating THE COURTESAN'S REVENGE, and also the memoirs of the latter book's subject, Harriette Wilson, all three of which I heartily recommend. They admit their readers into the world of the mistress and courtesan, the fascinating demi-monde she inhabited, and her usually precarious financial arrangements, which drove Harriette Wilson to blackmail and Mrs Jordan, more pathetically, to a lonely death in France, abandoned by her royal lover, separated from her children and deprived of her allowance.


Unfortunately, after reading these books, I am afraid it was a sad come-down to turn to THE HISTORY OF THE MISTRESS. The book is illustrated, moreover (perhaps from motives of economy?), by drawings done by the author herself, which I disliked. The one of Ellen Ternan struck me as particularly distorted (see, for comparison http://commons.wikimedia.org/wiki/File:Ellen_Ternan.gif)

The book is divided into categories: Mistresses of Royalty, Mistresses of the Aristocracy, Mistress of Muse, etc, and: The Notion of Free Love. Fine, but rather than deal with the common and different threads that run through these stories, and using the stories of individual mistresses as examples thereof within the sections, Fiona McDonald has chosen to tell each story separately. It is not, in fact, a History of the Mistress (still less The History), but a series of bites, all told at a breakneck speed that made the narratives quite hard for me to follow and jumbled the themes; for me at least, it brought on a serious case of reader's indigestion.

As for example: 'The poet Percy Bysshe Shelley had become an acquaintance of William Godwin while Mary (Godwin, later Shelley) was away in Scotland. Shelley and Godwin were busy hatching plans for accessing some of Shelley's inheritance so that it could be lent to Godwin and relieve him of deep debt.'

Mary has been Godwin's daughter for two pages by now; surely his debt-ridden state could already have been introduced. It would have given interesting context to the story of Mary's youth. But the narrative rushes on(rather like a high-speed train), leaving the brief glimpse of Godwin's ramshackle finances far behind. 'When Godwin's beautiful, clever daughter burst onto the scene..' Shelley's inheritance then pops up a whole page later, but only tangentially - blink and you'll miss it. One feels that the author is not quite sure how to organise her material; a firm and skilful editorial hand would have helped.

Infelicities abound; the French Revolution is said to have been 'looming' in 1783, which made it unsafe for Maria Fitzherbert (the future morganatic wife of the Prince of Wales who became Regent and George IV) to stay there after her husband's death. Since the Revolution took place in 1789, it would have been a good idea to explain - even briefly - what was already going on six years earlier. While dealing with Mary 'Perdita' Robinson, actor and earlier mistress of the same Prince, McDonald says that Mrs Robinson moved in with 'her beaux.' I do not think the author means that there were other men involved; unless she is using a version of the royal We to refer to the Prince? Mrs Robinson later had a fling with Charles James Fox, who McDonald baldly describes as 'a lawyer and politician'. I do feel that Charles James Fox, dissolute, charismatic, sometimes radical Whig and opponent of the slave trade, deserves better than that of any author.

In fact, the book reads like a series of Wikipedia articles, except that in Wikipedia, there would have been a link (then the reader could follow it and find out a lot more about the fascinating Mr Fox.) I suppose it might be handy for someone who wished to write a piece of fiction about a mistress, and wanted to decide which one to choose; though at £14.99, it would be an expensive first step in the research process. There is a scanty bibliography, given the expanse of history which the book covers, and it consists almost entirely of secondary material. For anyone really interested in the topic of the mistress, my recommendation would be to read a few full-length biographies of individuals, whose depth would give far more insight into the topic.
Posted by Leslie Wilson at 01:00

Very interesting. Where would we be without the mistress?

Sorry, I should have mentioned the publisher.

Pretty nice post. I just stumbled upon the blog and wished to say that I’ve truly enjoyed browsing the blog posts. party dresses