I'm currently writing a new Viking e-book for Fiction Express and it has set me thinking again about just how unusual a country Iceland was and is.
When Iceland was claimed and settled by the Scandinavians in 800-900, it became Europe's first republic (or commonwealth) and first democracy. Without a feudal system of Kings, lords and land ownership, this new land forged its own way. All the settlers came from monarchies, but this model wasn't how they chose to shape or build their new country.
Land was claimed by the settlers as they arrived (apparently according to how many bonfires you could light within view of each other in a day if you were a man or how much land you could lead a goat around in a day if you were a woman, but I'm sure it was also a matter of what you could grab!) As the land became settled, a number of regional councils were set up which met in spring to agree laws and settle disputes. And ultimately a national council was set up at Thingvellir, (council valley) in the rift valley outside Reykyavik. These type of councils had already existed elsewhere in Scandinavia but there they were ultimately subject to the king. Men (yes, I'm afraid it was almost all men, though women in Scandinavia were far from powerless) met inside a circle into which they could bring no weapons and there they talked. 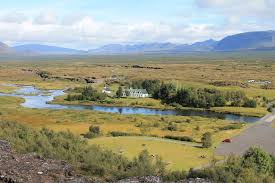 This annual meeting - the largest in the Icelandic calendar - was held with all the side shows such a gathering would naturally attract: booths, food, trade, horseracing and so on. A lawmaker was appointed to serve for a number of years and he would recite the laws of the land as agreed by the council. Disputes were settled, and important decisions taken, such as the occasion on which Iceland faced the ultimatum from Norway: convert to Christianity or be invaded from Norway. The Icelanders democratically appointed a man to take the decision, and he opted for a peaceful conversion.

This sounds idyllic and in many ways it was. It worked. The problem was that there was no independent law enforcement to ensure the sentences passed at the Thing were carried out. If a sentence such as outlawry was passed on an individual (typical for the crime of killing a man), it was up to the guilty party to abide by it. If he did not, he could lawfully be killed by anyone.
Some people openly flouted the law and stayed on their farms or didn't pay their fines. Then a posse of vigilantes (often the families

who had been injured in the first place) would get together and kill him.
The real problem here came with the Icelandic notions of honour. If someone in your family has been killed, your honour is in question until you have avenged him. This didn't theoretically apply to lawful killings, but in practice often did. And then his family would be honour bound to take revenge in their turn.
From this stemmed many blood feuds that over generations wiped out whole familes. Many of the Icelandic sagas centre around feuds and their resolutions. Gradually, a few powerful familes gathered most of the country's wealth and influence into their hands; never a healthy situation.
Tragically, violence and killing reached such a pitch by the  thirteenth century, that the Icelanders decided to call the Norwegian crown to restore peace. This was their undoing and led to a long period of colonial oppression, poverty and starvation, even worse than the initial problem. The darkest period of Iceland history was when Norway and Iceland came under the Danish crown and were treated with heartlessness and cruelty.
Iceland didn't become a democratic, monarch-free state again until Denmark was occupied by Germany during World War Two. They then seized their opportunity and who can blame them?
Thus from its earliest history, Iceland led the way for democracy. I find it fascinating to note that recently they have led the way again, by refusing to be crushed for several generations by the unscrupulous business practices of a few Icelandic bankers. Instead of agreeing to accept their debt as a nation, they rejected the notion of national guilt and (as I understand it) democratically rewrote their constitution online. As a result, after a brief but severe recession, the country is thriving while the rest of Europe is groaning under the yoke of austerity.
This view of Iceland's history is of course open to debate and not everyone agrees they made a right or fair decision. But as far as I'm concerned the message is: Long live democracy! (but you do need law enforcement...)

This is very interesting, Marie-Louise, and very clearly explained. And I'm so pleased to hear that you're writing about the Vikings again!

Thank you, Ann! I do love writing about Norse culture and the north! :-)

Such a lot of history we don't know about! Very interesting, Marie-Louise - thank you.