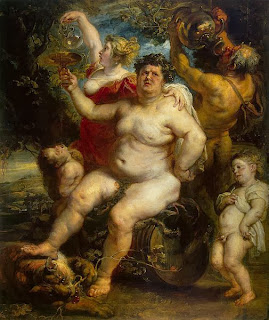 You always know Christmas is over and the New Year has arrived, because the annual ritual is announced – the latest initiative from the government to make us all lose weight and eat healthily. Will our rulers never learn from history? Kings and governments have been trying to control what we eat and drink since the Middle Ages through laws, taxes and outright bans. And here we are, 700 years later, still fretting about obesity.

King Edward II (1284-1327) tried to legislate against ‘the outrageous consumption of meats and fine dishes’, in one of many Sumptuary laws which were regularly enacted right up to Elizabethan age in an attempt to control what the populace allowed were to spend on food, clothes and luxury goods. In 1336, Edward III, worried by excessive consumption and obesity among his subjects, attempted to limit all his subjects' meals to two modest courses.

' ... whereas heretofore, through the excessive and over many sorts of costly Meats which the People of this Realm have used … many mischiefs have happened to the People of the said Realm: for the great men, by these excesses, have been sore grieved, and the lesser People, who only endeavour to imitate the great ones in such sort of Meats, are much impoverished; whereby they are not able to aid themselves nor their liege Lord in time of need, as they ought; and many other evils have happened, as well to Souls as Bodies; …. That he would thereupon ordain … for the Profit of his People … that no man, of what estate or condition so ever he be, shall cause himself to be served in his house or elsewhere, at dinner, meal, or supper, or at any other time, with more than two messes, and each mess of two sorts of victuals at the utmost, be it of Flesh or Fish, with the common sorts of pottage, without sauce or any other sort of victuals: and if any many choose to have sauce for his mess he well may, provided it be not made at great cost: and if flesh or fish be to be mixed therein, it shall be of two sorts only at the utmost, either fish or flesh, and shall stand instead of a mess; Except on the principle Feast of the year … on which Days and Feasts every man may be served with three courses at the utmost, after the manner aforesaid …'

Naturally people soon found a way round that. Previously, sweet custards and flavoured creams would be served as a different dish to a pudding, but if you claimed custard to be sauce, you could eat both together. Meat would have been served as separately from vegetable dishes such as leeks-in-sops, but if you combined the two on one platter they became one course or ‘mess’. 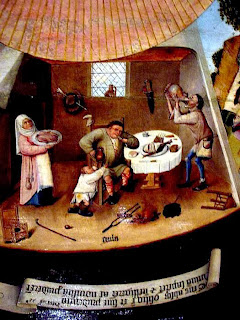 It is often thought that obesity is a modern problem and people used to eat healthier in the past. That maybe well be true, if by the past, we mean World War II rationing. But obesity certainly wasn’t limited to the present time, as is abundantly clear from the writings of Chaucer and Shakespeare. And little wonder, for a favourite dish served in medieval taverns was Brawn in Sharp Sauce. This consisted of the fat and head-meats of animals cooked and pressed into slabs of jellied brawn, which was then served deep-fried in lard. Was this really any healthier than popping in for a burger?

Records of food provided for workers and servants in Medieval and Tudor times suggest they consumed nearly twice today’s daily recommended calorific intake especially in bread and meat. We explain that by saying that they because they burned it off in manual labour and walking. That was probably true if you were farm worker, a sailor or blacksmith, but the vast numbers of clerks, nobles and those in Holy Orders did very little hard manual work. Yes, horse-riding probably did burn off more calories than driving in car, but I doubt it reduced the weight of the wealth who were carried on their journeys and didn’t have to saddle the horses.

Think of the vast quantities of salt ordinary people consumed especially during in winter and spring, when nearly every piece of meat, fish and even some vegetables would have been pickled or salted to preserve it. Then there was the drink. Records tell us that by the 15th Century those feeding the men and women harvesting in the fields were expected to provide either 6 pints of strong ale or a gallon of small ale daily to each person and that was just during working hours. In the Middle Ages ale, cider, mead or wine were the safe alternatives to water, even though these drinks may have been much weaker than those of today or watered down, the daily alcohol consumption, even of children, must have been a lot higher than today’s daily recommended intake.

Did their health suffer? Did they die premature deaths? There were, of course many who died from malnutrition and starvation, as well as those who died as a result of over-indulgence. But provided a medieval man or woman survived fevers and accidents, they could expect to live just as long then as now, even on those diets. 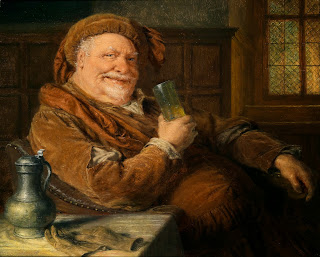 Yesterday I went to visit the tomb of Sir John de Sully in Crediton Parish Church, Devon. Sully died in 1387 at the age of 106, having fought in numerous battles including Bannockburn and the battle of Cressy (Crecy). He fought his last battle in Spain (la batille de Spaigne) when he was 86 years old. When he was 105, he was asked in testify in case involving a dispute over a coat of arms. His testimony was recorded along with a large number of other knights who were in their 80’s and 90’s at the time of the trial and also Sir John Chydioke who, like Sully, was over a 100 years old. I wonder what their dietary secret was.

With the exception of World War II, I wonder which period in British history the majority of people would have eaten what today would be regarded as a really healthy diet and which was the worst. Have you ever been tempted to try any of the slimming or health diets of our ancestors?

Deep-fried brawn - just reading about it is an appetite suppressor! The government should hire you!

Quite an eye-opener! Loved it - thank you!

Fascinating. I was intrigued by the old man of 106 - quite incredible, given the average life-span of the time. Perhaps it was something in the water supply?

Have you ever seen The Supersizers? It was a BBC show that got up close and personal with the diet of various eras - Edwardian, Victorian, Restoration, Medieval England, Ancient Rome etc. etc. The food choices seem to be well documented, even if Giles Coren gets the concept of "average lifespan" wrong repeatedly.