DON'T GET UP by Eleanor Updale

I’m writing this in bed. My inspiration for doing this comes from Lady Diana Cooper – superstar, socialite and general wonderful woman.

In his fabulous collection of her letters to him, Darling Monster, her son, John Julius Norwich, reveals that Lady Diana's bed was her centre of operations. It was where she did her correspondence, handled her diary, read, wrote, and received her most intimate friends.
For this, and many other more respectable reasons, she is one of my all-time heroines, but this blog is not about her. It’s inspired by a another book, first published in 1899 by a Church of Scotland Minister called Henry Grey Graham, of whom I had never heard till last weekend. 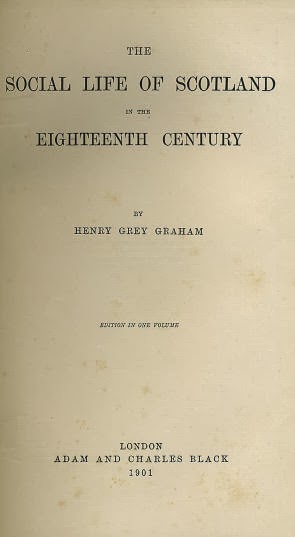 The book's title is The Social Life of Scotland in the Eighteenth Century. To my surprise, it turns out to be a jolly good read.
For a start, the very existence of this book is proof of what a load of rubbish some of us were told when studying History in in the mid 20th century. Then, the orthodoxy was that 'modern' historians were charting new territory: looking at the ‘real’ lives of the people of the past, rather than being fixated by battles and political intrigue. Here’s evidence that ‘social history’ was going on long before. And what’s great about Grey Graham’s narrative is that many of the tit-bits about the manners of the 1700s have been told him by people only a generation or so from the time he describes. Indeed some of his information comes from even earlier social histories, such as My Own Life and Times 1741-1814 by another cleric: Thomas Somerville. 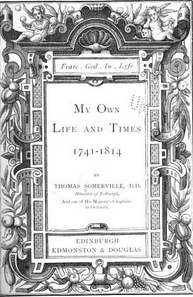 So it is that we learn what the houses of all classes north of the border were like (hardly any carpets in even the grandest, for example), what and when people ate, their tastes in reading, clothing, entertainment, gardening and so on.
This is some of what Henry Grey Graham has to say about beds. Here, he talking about the arrangements in comfortably-off :
The beds were closed like a box in the wall, or in recesses with sliding doors, which imprisoned and stifled the sleeper; others stood out in the room with curtains of plaiding which the household had spun, as protection from the cold and draughts which came from ill-jointed windows and doors with ill-fitting "snecks." As houses were incommodious and hospitality was exuberant, it was usual for two gentlemen or two ladies, however unknown to each other they might be, to sleep together, lying over-whelmed with the burden of from six to ten pair of Scots blankets.

Even in the drawing-room it was usual to have a closed bed, which was used by the guests. Excepting on state occasions the dining-room in average-sized country houses was unused, left dark, dull, and musty, unventilated by the sashless windows, while dingy ancestral portraits stared vacantly on the empty apartment from their black frames.
The Bedroom was where all the action was:

It was in the bedroom the family lived chiefly. There they took their meals, there they saw their friends, there at night the family gathered round the hearth, with its high-polished brass grate, which stood detached from the back and sides of the fireplace ornamented with tiles. There the girls spun, and lads learned the rules of Despauter's Latin Grammar; and only after "family exercises" did the household disperse, and the heads of the family were left to rest and to sleep in the exhausted air.

For the servants, sleeping arrangements were rough - even in the finest households:

In the house of a gentleman who luxuriously kept his carriage the servant slept under a dresser in the kitchen, while his man slept over the stable ; and in the flat occupied by an eminent judge the maid slept as best she could in a drawer in the kitchen which was shut up during the day. Owing to the scantiness of space, the nurse and children would probably sleep in the study, if such existed, the beds being removed during the day, when the lord of session worked over his charges or the nobleman saw his friends, while the lady in her bedroom was entertaining her guests at tea.

There’s masses more in the book. For example, this on medicines:

Bufo, or toad, was used inwardly for dropsy and outwardly for carbuncles; slaters, otherwise wood-lice, or church bugs, were commended for colic, convulsions,and cancer, for palsy, headaches, and epilepsy; earthworms for spasms, jaundice, or gout; vipers prescribed for dysentery, ague, and small-pox ; excreta of sheep, horse, sow, and dog made up in decoctions and drunk for various ailments.

Another section talks about popular female writers and intellectuals who hid their talents, alowing
the public to believe that their works were ancient masterpieces, or written by men. Among them

No more intelligent company was to be found than in the rooms of poorly-jointured ladies — such as that of Dowager Lady Balcarres, who received her company in the bedroom, with a neat coverlet over the bed, while against one of the posts lent her consequential servant John, who handed the tea-kettle and joined in the conversation.

So here we are, back in bed again. I think I’ll click my fingers and summon up my own ‘consequential servant’ right now.
Cheers.

My first thought is, I'm glad we learned about germs by the time I was born.
Now I must go read about Lady Diana Cooper.

I've often thought how lucky I am to be alive - my ancestors (domestic servants on one side of the family) must have been very tough! Now I learn that to have been born in Scotland would have been even more arduous! I love my bed, but, in accordance with all sleep manuals, I reserve it for sleeping and marital bliss. Not even reading!

How wonderful! I must seek out this book.
I spent a year ill and writing in bed not so long ago. It was a very comfortable workspace!

I learn more new things! Many thanks!

This is utterly fabulous, Eleanor. Thankyou! And the cupboard-like beds with the sliding doors sound just like the ones in Norse longhouses.

Fascinating, not to say comforting! Please find me a 'consequential servant' while you're about it!