There is Nothing Like a Dame, says Laurie Graham

By the time this post appears I’ll be in Italy preparing to direct Jack & the Beanstalk for the biennial Venice pantomime, so it seems an appropriate time to write about the man who shaped the pantomime dame as we know her today: the great Dan Leno. 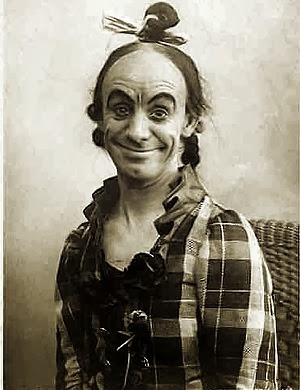 Dan started life as George Galvin, the child of two struggling music hall performers and if he wasn’t quite born in a trunk in the Princess Theatre, he was certainly soon a part of his parents’ endlessly travelling, bread-line existence. At the age of three he made his stage debut as Little George, the Infant Wonder Contortionist and Posturer.


In the 1860s childhood was a brief affair in even the most comfortable of families. In show-business it was over as soon as a child could walk onto a stage. By the age of eight Little George was earning a decent living as a clog dancer, doing the rounds of the northern music halls. Then his father died, his mother remarried, and when George began re-branding himself as a solo act he took his step-father’s surname, Leno, as part of his new stage persona. Dan Leno was born.  He married a comedienne, Lydia Reynolds, and perhaps under her influence began to develop his own repertoire of comedy songs, strung together with the rambling monologues that were to become his famous ‘patter’.


Dan Leno was the forerunner of a style of comedian that will be familiar to British readers.  He looked funny – short and skinny, with big ears and huge expressive eyes  - and had people laughing before he opened his mouth. And he was a conversationalist, not a teller of jokes, a character who chats with his audience and draws them in. Les Dawson, Max Miller, Larry Grayson, Frankie Howerd, all followed a style first developed by Dan Leno, as of course did that uber-Dame, Edna Everage, who introduced a little sharpened steel into the mix. 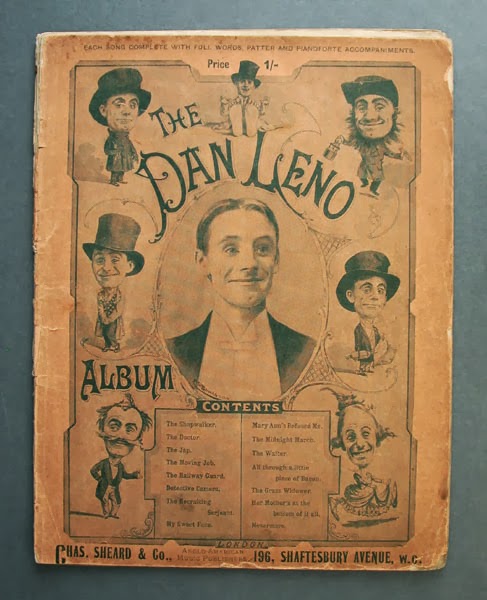 Leno made his London debut at the Foresters’ Hall in Mile End, and then, as would have been quite typical for a support act in those days, jumped into a hackney and raced to Drury Lane to perform again at the Mogul Saloon. Neither of those venues survives today, but the New London Theatre now stands on the site of the Old Mo’.  The manager of the Surrey Theatre in Blackfriars Road saw Leno’s early London performances and recognised his potential for playing in pantomime. He cast him as Jack’s mother in the following season’s Jack & the Beanstalk. Dan Leno had found his niche. Cross-dressed, improvisational, and with an unerring gift for the absurd, Dan Leno set the pattern for all future pantomime dames.


‘Have you never been to the Tower of London? Oh if you’ve never been, do go again,’ is a typical Leno line.


Pantomime made him an overnight star and one of the highest earners on the London stage. He performed for King Edward VII and he became a merchandising phenomenon: comic books, tea sets, even a Dan Leno ink well. 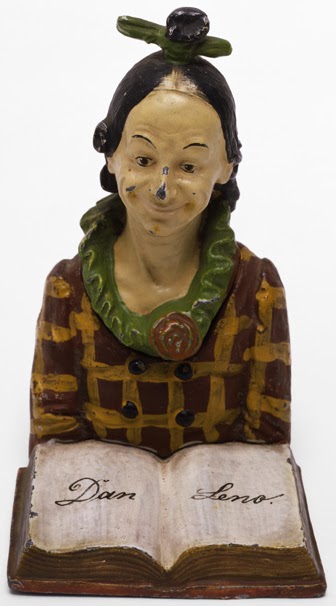 There was so much money coming in that he could afford to buy a house and Lydia was able to retire, to concentrate on raising their children. But sadly the story doesn’t end well. Money may have been coming in but money was also pouring out, literally (he was drinking heavily) and figuratively. Generous to a fault, Dan Leno would help any fellow performer who had fallen on hard times. He was a founder member of the Grand Order of Water Rats, a benevolent association that recognised how financially precarious the life of a performer can be. The Water Rats are still going strong today.


As he entered his forties the physical demands of his performances took their toll. His hearing failed and his moods became erratic. He was twice admitted to the Camberwell Asylum and his attempts at a stage comeback ended in failure. Many people believed alcohol was to blame, some have suggested that he may have been suffering from an undiagnosed brain tumour. He died in October 1904 aged just 43 and his death was front page news. One of the most eloquent tributes paid to him came from the actor-manager, Max Beerbohm Tree.


So little and frail a lantern could not long harbour so big a flame.


Whether Dan Leno has quite left the building is open to discussion. His ghost is believed to walk the Theatre Royal, Drury Lane, the scene of many of his pantomime triumphs. There’s only one reported sighting of him, in the 1920s by the American comedian Stanley Lupino, who saw him in his dressing room mirror, but he’s been heard, clog-dancing in an empty dressing room and the smell of his distinctive lavender cologne has often been noticed backstage.


Jack & the Beanstalk will be my sixth (and last) Venice pantomime and I’ve been fortunate enough to direct the same amateur actor as Dame in all six of them. Jonathan Fox, who will be appearing as Dame Dotty Trott, seemed an unlikely bit of casting at the outset: a retired businessman, devoted grandfather and quietly spoken pillar of society. But strap him into a bustle and a GG cup bosom and he is a man transformed and a worthy heir to the legacy of Dan Leno.

Best of luck, you lucky woman! And thanks for the story of Dan Leno - such a fascinating character - and those eyes!

If only we'd known earlier - we could have had a History Girls' trip - 'Our Day Out' in Venice!

Brava, Laurie! It will be great. It always is.

You have done a great thing for Venice with these amazing pantos. I'll always remember explaining to Venetian friends, at the first Laurie Graham Venetian panto, how the main boy is a girl with great legs and the dominant lady is a man ... and it seemed to confirm everything they had always suspected about the warped nature of anglosassone sexuality, as nurtured in Public School ... and as I whispered translations of the script through the show, they grew more and more thoughtful.

Sue, willing tour guide available for History Girls outing to Venice. Or even a Boot Camp ...

The great Dan Leno! Lovely post. I envy you directing panto in Venice and would fly over by carrier pigeon were it possible!

I have pressed this on First Night Design and re-blogged it on my theatre blog, Rogues & Vagabonds, with additions as I sell my vintage Dan Leno postcard in my vintage store:

Have a great time.
Lovely post!
"Dan Leno had found his niche. Cross-dressed, improvisational, and with an unerring gift for the absurd, Dan Leno set the pattern for all future pantomime dames." Of course, I shared immediately with FB friends.