Last week, I sat down happily to watch Stargazing Live, with Dara O’Briain and Professor Brian Cox. I’ve been a fan of this programme since it started, and it was lovely to see the lads again, along with Liz Bonnin and the usual assortment of enthusiastic and incredibly knowledgeable astronomers, physicists etc. The music starts, the vast telescope looms above the studio, and off we go, raring to see what new gadgets, discoveries, and fantastic photographs there will be this season. 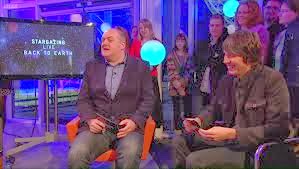 I can’t tell a lie, though  – about twenty minutes in (Well, okay, more like five!) it occurred to me that at best I was probably understanding one word in ten. Two or three years ago, when the series began, I’d swear I was nearly grasping – ooh, maybe three in ten. So what’s happened? Well, one possibility, based on the available evidence, would be that I’m getting stupider. My preferred theory, however, is that it’s become clear that there’s a sizable audience out there that, unlike me, actually does understand an awful lot. Look at the kit some of them have! Telescopes and cameras powerful enough to discover – yes, actually to discover – hitherto unknown stars and galaxies, and what’s more, to take stunning pictures of them.

So Professor Brian doesn't need any longer to explain things in words of one syllable, illustrating concepts with a piece of string, three oranges and a heap of pebbles. No, he can talk to a large part of his audience in language he can be confident they’ll understand. 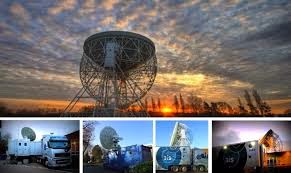 But even though I don’t (understand, that is), I’m still fascinated by astronomy, just as I always have been. Did anyone do that thing, at Freshers’ Week  in your first term at university, where you joined loads of clubs and then never went to any of them? Well, I did, and the first one was the Astronomical Society. Why on earth (sorry) did I never go to any of their meetings? So what if, at school, I was to science as two like poles of a magnet are to each other? (See, I did learn something in science.) Maybe if I'd gone. I'd have discovered that despite all appearances to the contrary, I did have an aptitude for science. Or maybe not.

There used not to be such a divide between scientists and artists. In the 18th and early 19th centuries, they happily rubbed shoulders: Mary Shelley's Frankenstein was, in a sense, born when, as a girl of 14, she went to hear lectures on chemistry given by Humphrey Davy. Davy himself wrote poetry, and was a friend of Coleridge and Southey. Keats studied medicine for two years. And you could switch. William Herschel - born in Germany - began as a musician, but became a self-taught astronomer who shook up the scientific world by, among other things, discovering the seventh planet, Uranus. From his observations, he conjectured that the universe was not unchanging and static, as had been hitherto believed, but was continually evolving. His younger sister, Caroline, escaped what threatened to be a lifetime of drudgery looking after her mother and her eldest brother Jacob, when she came to live with William in England. She began helping him with his observations, and eventually became an astronomer in her own right, achieving fame in 1786 when she discovered a new comet. A subject for a future History Girls anthology, perhaps!

So if Caroline could do all that, maybe I shouldn't give up so easily. Perhaps I'll just give Stargazing Live another go on the i-player, only this time I'll really really concentrate.

To read more about the Herschels and their circle, go to Richard Holmes' fascinating book, The Age of Wonder.

Reader, I did go and watch the second episode, which I'd missed, and I could understand loads of it! Fascinating to hear from two actual astronauts. And oh, those beautiful pictures of the Aurora Borealis!

I think our ears (and brains) need time to get used to the language of any unfamiliar subject, and watching such a show on the tv - even when you WANT to take it all in and learn - can take more attention than is around after a busy day. Hooray for all the view again options!