WHEN IS A PICTURE WORTH A HUNDRED WORDS? by Penny Dolan

I was reminded, by the recent Cheapside Hoard post, of my visit to the Museum of London last year.  I had a brilliant day all by myself, seeing things like these and more:

and all sorts of things to do with London, including this painting:

However - and I wish it wasn’t so - I came away with a big moment of grumble. Late in my visit, I went into a small booth for yet another video experience. There'd been others: The Black Death, The Fire of London, and so on. This time, we were shown a collection of short clips taken from twentieth century newsreel films.

The audience was a random group. Some were probably keen viewers and students, some were just pleased to sit down, and I was both. There in the half-dark, among all the adults, were several pre-teen & teen children. They were all at an age when one hopes history will start to mean something to them. We all sat, watching the flow of footage.

After a while, close by me – the seats are rather tightly arranged – I caught a fragment of conversation.

A girl of about thirteen asking “Mum, what’s she doing?”

The mother, with a large shrug and a sigh, answering “I don’t know.”

Before long, the show ended. So many years. So many people and places. So much activity flickering across the screen, ending in a long list of credits. So admirable. Apart from the fact that there were no words on screen or anywhere close by that told the viewers exactly what or when or where or who they had seen, or why it was important.

A picture doesn’t, I feel, always tell a thousand words. A picture often needs its own words to give it a context and history, especially in a museum. Below is a still photo similar to the moving image. She's been shoplifting, perhaps? 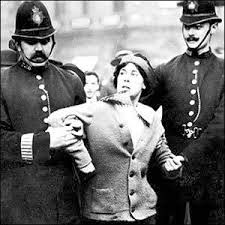 So that’s my grumble, my disgruntlement. Although we live in a highly visual age, there are times when a picture is not enough on its own, and some kind of written information is essential. I feel that history is dangerously weakened when the importance of words gets forgotten.

Ps. Dear London Museum, if I missed an important information board, or something similar, I’d be only too glad to learn of the fact. I know there is a display about the Suffragettes but obviously, from the overheard conversation, not everyone visits that section.

I think museums have improved massively and display things really creatively now - but I agree, sometimes you feel you need a little more explanation and context - certainly in this case. But the Museum of London is definitely on my to-visit list!

It's so easy to forget how incredibly recently the Suffragettes were necessary - why aren't we teaching this in schools? Images like that should be as recognisable as the moon landing.

The films also showed a lot of other moments of conflict such as fascists marching in the streets, protestors in Trafalgar Square and lots more, all passing at speed. I wished that there'd been a printed list of the clips so that I - and maybe others - could find out exactly what event was being shown.

Sue, the rest of the museum was excellent, which is why this omission was noticeable. (The display of flints was just beautiful!)