I’ve been searching in the attic trying to find research notebooks, photographs and primary source material relating specifically to World War One.

Being a professional librarian it should all have been boxed, filed and labelled - with perhaps even a card catalogue or, at the very least, an index file to help me navigate the tremendous amount of ‘stuff’ I collected when writing Remembrance. Sadly, no. After finishing a book that requires major commitment in time, energy and travel, I always find that I’m physically and emotionally exhausted. It requires a huge effort on my part to put the research in some kind of order and tie up the files. Sometimes I don’t want to even think about or discuss the subject. Fortunately that wears off, and, by the time publication date is approaching, and I’m semi-sane again, I’m quite willing to talk about themes, issues, whatever, to anyone who’ll listen. Perhaps it’s having a glossy-covered, crisp-paged, brand-new book in my hand - with my name on it - that gives me the kick start. I hope I never lose the slight feeling of surprise and the incredible joy that I experience when I open up the book and begin to read it.

My recent attic ‘finds’ were the photographs of Historical Re-enactments that I attended when researching a couple of my books: Remembrance and Spy for the Queen of Scots

I’ll come straight out and admit it right away. I’m a big fan of Historical Re-enactments… 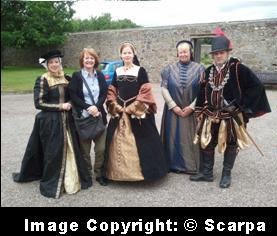 I’ve never actually participated in a ‘Living History’ event but, speaking to those who do and listening to their stories, is almost as fascinating as watching the re-enactment itself. Reasons given ranged from : ‘ I like dressing up’, ‘you get to shoot at people without actually hurting them’, and ‘it’s a sort of respectable way to play games when you’re an adult’ to ‘I never feel more alive than when I’m doing this’ I love being connected with history and culture in this way’, and ‘it’s an essential part of my life’. A significant number of people said they did it because they could trace their ancestry back to those specific times – and a high proportion of these claimed to be direct descendants of royalty and nobility! In the case of World War One, very many men and women told me it gave them a real and very personal connection with their own family history. They’d traced their roots, and / or found family photographs and letters of relatives who’d fought and often died during the Great War.

Most of the events I’ve attended have been slightly chaotic. The World War One re-enactments at Stirling Castle involved a lot of running about and shouting, interspersed with smoke bombs and officers bawling orders, which their troops cheerfully ignored. I’m not sure if this was intended to reflect the actual action of the Great War, but certainly the rainy weather gave a flavour of authenticity. And this made me pay attention to the rain capes of the soldiers, how they look and how they smell when wet. 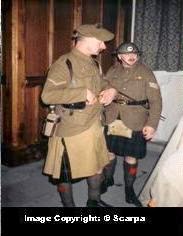 Our visual images of World War One are mainly black and white or sepia tinted. It’s startling to see the pristine cream-coloured puttees worn by the soldiers on parade. The aprons that the soldiers of the Highland regiments were obliged to wear over their kilts when working out of the front line look faintly ridiculous. I can touch the actual army uniform and feel the coarse cloth against my skin. NB – I did manage to get close to the one that was worn by Brad Pitt in one of his acting roles!

I try on the soft cap which was the soldiers’ headgear in the early part of the War. I turn it over in my hand, and I shudder as I recall seeing the size of artillery shells in the Imperial War Museum.
I know that girl munitions workers wore overalls of a distinctive blue and the shade was named by them as ’munitions blue’. 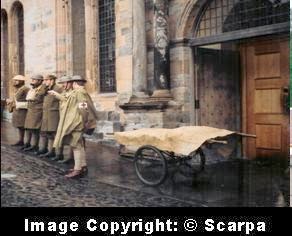 What did impress me was the knowledge of the participants. In addition to performing their set pieces, when ‘off duty’ they’d take time to chat and were an invaluable source of information. The Internet is a vast resource and one can find almost anything one is looking for. But often I don’t actually know what I am looking for. And often when I find it, I don’t recognise its true value.

But I am a hoarder.

When the maid of the household of Mary, Queen of Scots tells me that she collects strips of willow for her mistress to use to brush her teeth, I write that down. It may be months before I realise that it could be the way that a would-be assassin might try to poison her Grace. 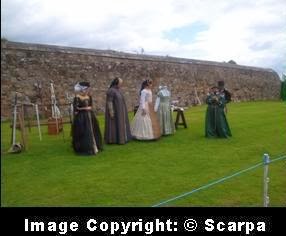 I watch the four Marys ‘dress’ their Queen’ and, almost unconsciously, I’m counting the number of pins it takes to secure the heavily embroidered sleeves to her dress.
The chap in charge of the horses lets me know that the stable boys had their heads shaved at regular intervals to prevent lice. Is that worth remembering? Why yes, because a shaved head completely changes a person’s appearance.

It does seem like that, doesn't it Joan, when you discover a little gem of a fact.

So pleased to read about about the stable-boys' shaven heads! I've just put that into my up-coming novel as an educated guess. *phew!*

Wouldn't a shaved head also allow someone to be not noticed and hide in plain sight! also would people then, notice their servers or base servants more than we recognize our till assistant out of uniform? What a great way to hide, would only need the stable head to know and vouch for the hidden one as a distant relative :-)and one hidden highborn, good back story and a few skills and the ability to keep your head down! :-) now all I need is time to make it a story and then write it, etc... feel free to use and have fun folks.

Great guess Marie-Louise! I'd never have thought of it but when it was said it seemed so obvious. Gosh Ruan you've got a story going right there. Stable boys came and went and stables were often like mainline railway stations are now so I think there'd be minimum 'vouching for' needed. My take on it was that it might blur the gender line as in medieval times no girl would have a shaven head...

That was my line on it. My stable boy is a girl.
When I discovered the boys had to sleep in the stables at night with the horses to keep an eye out for colic etc, it seemed likely there would be issues with lice. It also interested me to read that people were as obsessed with fresh air being injurious to health for their precious horses as they were for themselves so stables were draft free and tightly locked at night. The result was the stink of amonia by morning was enough to make your eyes water.