A hundred years ago this coming March, an astonishing find was put on public display for the first time in the new ‘London Museum’ near St. James’s Palace. On March 19th, 1914, the Nottingham Guardian reported it thus:

For two years a dozen persons have carefully guarded the secret of the wonderful discovery of treasure trove in the heart of the City. Yesterday the secret was revealed. In a glass case in the centre of the Gold and Silver Room at Stafford House, the new home of the London Museum, a collection of Elizabethan or early Jacobean jewellery, unique in the variety of its designs and priceless from a historic standpoint, invited the admiration of beholders. South Kensington can boast nothing to compare with it.

This dazzling collection was the Cheapside Hoard, a mass of almost five hundred jewels, stones and gold and enamelled jewellery that had been dug up by workmen while they were demolishing buildings in Cheapside in 1912.

The 1914 display drew large crowds, and impressed King George V and Queen Mary so much that they visited twice. Gems and precious metals are usually reworked and reset over the years; what the hoard provided was therefore an immensely rare view of the past. Never before (or since) had such a large cache of 16th- and 17th-century jewellery been found, and the quality of the workmanship, the beauty and intricacy of the designs, and the sheer splendour of the massed hoard caused a sensation. Reading the description of the hoard on the current Museum of London’s website, it’s easy to see why:

The Hoard includes delicate finger rings, glittering necklaces, Byzantine cameos and a beautiful jewelled scent bottle. The range of gems is staggering – diamonds and rubies from India, pearls from the Middle East and sapphires from Sri Lanka as well as a unique Colombian emerald watch and stunning salamander brooch.

Today, the Museum of London has the whole hoard on display again for the first time in a century (the exhibition runs until 27th April; click here for details). And to accompany the exhibition, its curator Hazel Forsyth has written an excellent book, The Cheapside Hoard: London’s Lost Jewels, which examines not only what the provenance and style of the jewellery can tell us about Elizabethan and Jacobean life and trade, but also the lives of the goldsmiths themselves, plus what she calls “the murky events surrounding the remarkable discovery and the subsequent acquisition of the Hoard by the Museum of London”. 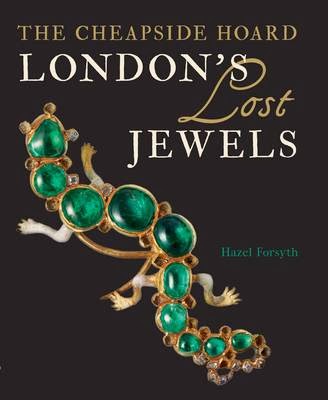 Not surprisingly, journalists reporting on the exhibition in 1914 were particularly interested in where the hoard had come from and how it had been found. The London Museum, however, was oddly tight-lipped on the subject. The Nottingham Guardian gave its readers a confident account:

Some workmen engaged in excavating at a depth of 16 feet in an old City cellar scratched their heads as a sign of bewilderment when they noticed jewellery and precious stones, begrimed it is true, but none the less unmistakable, slip through the chalky soil which they were throwing on one side…

But in fact reporters did not know this kind of vivid detail for sure. The Museum had only stated that the hoard had come from a building somewhere near St Paul’s Cathedral, and indicated that it had been found in a wooden box – but even this last detail was more than the Museum really knew.

The reason for the confusion – and the secrecy – was the likelihood that exact details would give rise to competing claims of ownership. The hoard had been found beneath a cellar during the demolition of some 17th-century shops: numbers 30-32 Cheapside. For hundreds of years Cheapside had been the main market street of the City of London, and its west end was internationally renowned as the spectacular goldsmiths’ quarter. Although by 1911, when the demolition work began, Cheapside’s heyday was long past, the owner of no.s 30-32 was still the Worshipful Company of Goldsmiths. The Company had clearly foreseen at least the possibility of something interesting being turned up, because it had drawn up a special contract with the building contractors carrying out the demolition, according to which “any antiquities and articles or objects of interest or value” found during the work had to be handed over to the Company. An additional complicating factor lurking in the background was the ancient law of treasure trove, which gave the City itself (in certain circumstances) rights to any gold or silver found.

However, the London navvies who actually undertook the demolition work seemed equally unconcerned by the City’s ancient rights or any contract their employer might have signed. They had their own method of turning ‘treasure’ they dug up into ready cash: they took it to a bloke in Wandsworth called ‘Stony Jack’.

‘Stony Jack’ was George Fabian Lawrence, a man who had what Hazel Forsyth describes as “a multifaceted career as a pawnbroker, dealer, collector of antiquities and sometime employee of both the Guildhall and London museums”. What seems to have run through all this, like a thread of gold through rock, was a passionate interest in archaeological finds, albeit with – it must be said – an idiosyncratically entrepreneurial twist. In an interview quoted in the Daily Herald in February 1937, Lawrence explained it thus:

I got to know a lot of navvies… [and] I thought what a lot of stuff was being lost because [they] did not know what to look for. I decided to try to teach them… I taught them that every scrap of metal, pottery, glass or leather that has been lying under London may have a story to tell the archaeologist and is worth saving. They were apt pupils, and hardly a Saturday passed without someone bringing me something. I got 15,000 objects out of the soil of London in 15 years for the London Museum alone.
(quoted in London’s Lost Jewels, p.8)

Certainly a wide range of items passed through Lawrence’s hands. Looking him up on Wikimedia Commons, I found this Roman ‘curse tablet’, which he sold to the British Museum in 1934:

The navvies brought the Cheapside treasure to Lawrence piecemeal, in pockets and sacks, hankies and hats. It is not surprising that they were not interested in recording the exact physical circumstances in which they had found the jewels, but it is a shame, since evidence was thereby lost that might have pointed to when and why the hoard was hidden (as well as, more generally, telling us how jewels were packaged and stored in the 17th century). As Forsyth puts it:

Was there one box or several? Were the containers whole or damaged? Was the hole lined in some way or roughly dug?

We shall never know. Nevertheless, I can’t help thinking that Stony Jack’s role in the story was, overall, a fortunate one. How easily might the hoard have been split up between various pawnbrokers or backstreet dealers, without ever coming to the notice of a museum! As it was, Lawrence immediately wanted the collection to go to the London Museum – a new venture, not yet opened – and, though wrangles ensued with the British Museum and the V&A, and with the City authorities, that initial decision of Lawrence’s undeniably secured the hoard’s future. (Interestingly the Worshipful Company of Goldsmiths, despite their contract with the building firm, never even got a look-in.)

As to why the hoard was buried in the first place, and by whom, Hazel Forsyth’s book examines every possible angle. Firm answers are elusive, but the quest makes fascinating reading. And, since Forsyth – who is herself a freeman of the Worshipful Company of Goldsmiths – also examines many of the individual pieces from the hoard in detail (with the help of fantastic photographs), if you cannot make it to the exhibition itself, getting hold of London’s Lost Jewels is a marvellous substitute. 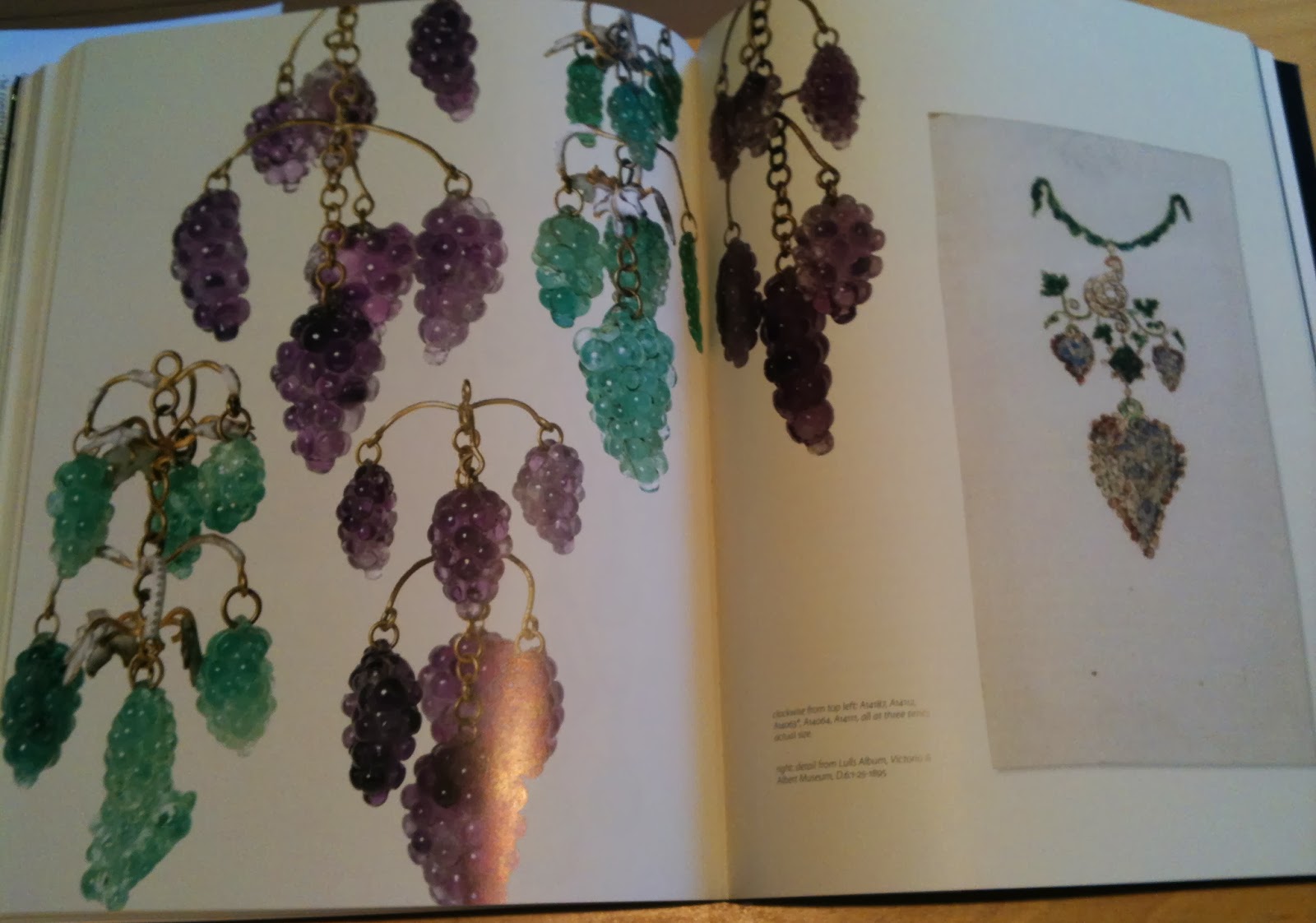 The Cheapside Hoard exhibition runs at the Museum of London until 27th April 2014. The Museum’s website – which includes a gallery of pictures of the hoard – is here.

H.M. Castor’s novel VIII – a new take on the life of Henry VIII, for teenagers and adults – is published by Templar in the UK, Penguin in Australia, Hachette in France, and Simon & Schuster in the US.

I am hoping for a windfall so I can come and see! Do you know why the Hoard is not on permanent exhibit? Perhaps security is too expensive?

Very interesting. I went to see the exhibition on impulse, when I was in London before Christmas, and it is stunning! I didn't know about the contract with the Goldsmiths - I'd thought it was good luck that the workmen took the jewels to someone who was interested in archeology, not to a fence.

I think that parts of the hoard are normally on display and that it is having all of it at once which is unusual, but I may be wrong.

I'd never been to the museum of London before, and plan to go back some time when I have more time for the rest of the exhibits

So interesting! I wonder what happened to the liver and lungs of the cursed lady?

Fascinating! Love the old photograph of London at the top of the post.
Liz

Gosh, I must go! Thanks for this, Harriet!

Great post, I love that the hoard arrived at the right place by such a route, and not through worshipful contracts.