Cromwell at the Swan by Mary Hoffman


When I first heard that Ben Miles was to play Thomas Cromwell in the RSC adaptations of Hilary Mantel's Wolf Hall and Bring up the Bodies, my instinctive reaction was "but he's much too good-looking."

I was wrong, of course. Miles has reached that point in his acting career where a piece of imaginative casting like this gives him the chance to throw off the shackles of early romantic lead swoonworthiness and show us what he's really made of. And on the days when both plays are done he has most of six hours to do it in.

From the opening lines of Mike Poulton's brilliant adaptation of Hilary Mantel's two Man Booker prize-winning novels, you know you are a safe pair of hands. After a wordless prologue of Tudor dance when we first glimpse  Henry Vlll, Katherine of Aragon and Anne Boleyn, the scene switches to Cardinal Wolsey's house, where a very wet Cromwell enters.

"Yes - Isn't it?" answers Cromwell, pleasantly putting his rival firmly in his place.

You sense from the beginning that this is not a man to tangle with. And then you are with Cromwell and his master, the Cardinal, and their dialogue sweeps you into the life of this busy, loyal, calculating and intelligent man. You don't need the actual beginning of the book where the young boy Thomas is brutally beaten by his father; there are enough allusions to convey that.

Although Ben Miles really is outstanding as Cromwell, the whole ensemble is strong, with not a false note. Cardinal Wolsey is Paul Jesson, a towering presence even after death, the father figure that earns Cromwell's undying devotion and informs so many of his later actions and loyalties.

Henry Vlll is Nathaniel Parker, again not an obvious choice for the role, but this in an interpretation, not an impression and his growing menace, self-deception and unpredictability are well conveyed. 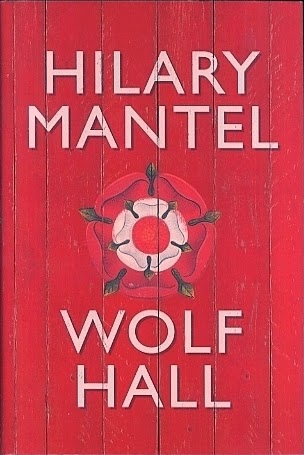 Just how do you set about adapting a 653 page novel into a three hour play, with interval? Mike Poulton describes it as "taking apart a Rolls Royce engine and reassembling the parts into a light aircraft." You don't get Mantel's voice, that tone that she described to us here on the History Girls as "something between first and third person," but you do get some of the flavour of her personal touches, through the inclusion of details like  Ambassador Chapuys' fantastical Christmas hat, rendered suddenly inappropriate at court through the news of old Queen Katherine's death.

You don't see Cromwell's daughters, snatched away by illness, but they are there  in reference and in the cracking of Miles's voice when he reads the name of Anne Cromwell, written in his late wife's prayer book. We do see Lizzie Cromwell, played by Olivia Darnley, who is also - amazingly - Mary Boleyn, and we get a strong sense of Cromwell's family life, as we do in the books.

Hilary Mantel has been criticised for being too kind to Cromwell, for making him too believably human, but surely this is right? We know he was married with three children, two of whom died young and that he was unfailingly loyal to his old master. However ruthless he might have been in his political choices and sense of expediency and self-preservation, that doesn't mean he couldn't have been a loving family man and faithful friend. What she does is present a controversial historical figure in the round and Mike Poulton's scripts do that too.

Only at one point, in Bring up the Bodies, in the scene where Cromwell makes his pact with the Dukes of Suffolk and Norfolk to bring about Anne's downfall, did I feel a lack of sympathy with the main character. And I didn't feel that in the book so maybe there was there a slight loss of nuance.

It apparently took Mike Poulton nine drafts to come up with this masterly transfer from page to stage. You don't sense the effort behind it. He says that members of the audience will miss some favourite scenes and that for me included the peacock-feather Angel wings and the huge Christmas star that so terrified Mark Smeaton when he was shut up with them in Cromwell's house. But the drama worked fine without them and that is the main thing.

The roles of Cromwell's clerk Rafe Sadler and his friend's son, the poet Thomas Wyatt are enlarged to give more opportunity  for confidences and a sense of whom Cromwell trusts. And who could have guessed that mousy little Jane Seymour, played by Leah Brotherhead, could be so interesting and savvy? Well, anyone who had read the books, I suppose.

I did wonder about that, about how many of the people in the sold-out Swan Theatre in Stratford would have actually read both titles. I think you probably get much more from the plays if you have, though it could be that people have just been drawn there by the books' and the writer's enormous reputation. And they would have enjoyed the experience too.

What you see is the story arc of the rises and falls of reputations and the fatal consequences when Fortune's wheel spins the characters down to the bottom-most part of their circulation. First Cromwell, then Anne Boleyn and of course, when the third book, The Mirror and the Light, comes out (we hope) next year, the whole pattern will be repeated with Cromwell himself. And that must surely be staged as well, completing his remarkable trajectory from blacksmith's boy to Earl of Essex and the most powerful man in England after the king.

After the king. That is the point. We see how Henry can turn on a sixpence (?a groat) when angered by Ambassador Chapuys. He rounds on Cromwell and the blacksmith's boy nearly wallops his monarch. As Henry's reign progresses, we know he will deteriorate into even more fits of temper and irrationality: Cromwell's fate is already written in the stars if not yet on the page.

This is a fine and subtle adaptation. I particularly admired the way in which we saw only the rehearsal for Anne's execution, not the bloody act itself. Almost every choice is the un-obvious, the rejection of sensationalism and horror in this most violent of love stories.

And the recurrence of the dead Cardinal was just right, reminding us of one of Cromwell's most powerful attachments, the older man who had, unlike the blacksmith, valued him and treated him well. 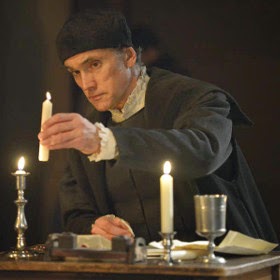 The plays are transferring to the Aldwych Theatre from 1st May to 6 September and it will be another sell-out. I shall go again, even though only the most expensive seats are left. It will be interesting to see the change from a thrust stage to proscenium. Or maybe the theatre will be adapted?

Whatever happens, I can't wait.

An excellent review. I'd see these plays if I could. The RSC never disappoints.

Nathaniel Parker as Henry VIII? I'm a big fan of his. I'd love to see him take on such a role.

Very interesting account of how the books were brought to the stage: all the choices that had to be made. Thank you!