John Muir, considered to be the founder of the world’s National Park movement, is one of my big heroes.
He was born in Dunbar on the east coast of Scotland, where you can visit his home and museum, and there is also a rather lovely statue of him on the main street of the town.

His family left Scotland when he was eleven years old. They moved to Wisconsin, and it was in the USA that he was particularly active in his conservation work.Although he lived over a hundred years ago he recognised the potential destructive force of increasing industrialisation
and actively campaigned to preserve the natural landscape.

He is widely revered in the USA as the founding father of their National Parks. I visited the John Muir Park just outside San Francisco, home of some stunning redwood trees

An inventor, naturalist, artist, mountaineer, geologist, glaciologist and writer, John Muir spent his life exploring wild places and it is due to his efforts that there are still a lot of wild places left for us to enjoy.

2014 is the 100th anniversary of his death and to help young people develop a deeper understanding and awareness of the natural environment a graphic novel John Muir, Earth – Planet, Universe has been published by Scottish Book Trust

The novel, based on the key moments and life adventures of John Muir, is illustrated by artist William Goldsmith and written by award-winning author Julie Bertagna.

Julie Bertagna is the perfect fit to be the author of the book. Passionate about the environment, she wrote the hugely popular trilogy of books - Exodus, Zenith, and Aurora - about a future flooded world. 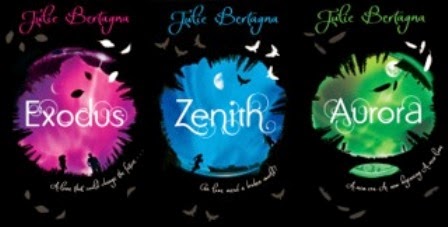 When I asked her about writing the John Muir book Julie said:

There's a lot of appeal for children today in the story of a Scottish boy from Dunbar who grew up to be a world famous global explorer and adventurer -  an American hero who ended up on stamps and coins, with all sorts of places and things named after him, from mountains to millipedes.

As a youngster, John was a real wild spirit who escaped every moment he could from schoolwork and Bible studies to roam outdoors, getting into scraps and all sorts of mischief. Dunbar is where his love of nature began so we've included funny, quirky stories from his early life that proved a real hit with when we trialled the book in schools across Scotland.

Young people today are deeply interested in the future (as seen in the current craze for dystopian, futuristic books and films, including my Exodus trilogy about an environmentally-devastated world) and as the first modern environmentalist John Muir speaks to them about the kind of world they want - and don't want - to live in.

My aim was to tell John Muir's story in a lively and page-turning way, combining powerful images (by illustrator William Goldsmith) with Muir's own words that would resonate with a young audience - the head-spinning idea that they are citizens of the universe, spinning through space with all the other planets and stars, and as the up-and-coming new caretakers of the Earth, its future soon will be in their hands. 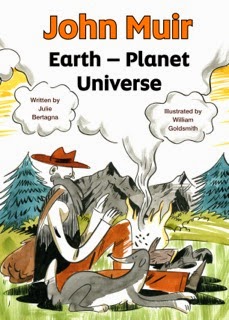 Another major event of the anniversary year will be the opening of the John Muir Way on the 21st of April. Stretching from his birthplace in Dunbar, through Scotland’s first National Park at Loch Lomond and the Trossachs, to the River Clyde and Helensburgh, it carves a path through the splendid scenery of central Scotland.

There’s a whole John Muir Festival going on just now with walks conducted by the Ramblers Association plus a street ceilidh and firework festival finale at Loch Lomond on the evening of 26th April.

NOTE: There will also be an accessible pdf version of John Muir, Earth – Planet, Universe available to download from www.scottishbooktrust.com/johnmuir
as well as teaching support notes and pupil activities which accompany the book.

This is all great - what a hero!

I really enjoyed this post. It is so important to encourage young readers to be environmentally responsible and nothing works better than a story of adventure. What a hero John Muir was.
I wish I could be there for the festival. However, I will certainly be reading more about him. Thank you for this post.
Carol Drinkwater

I agree. I live in one of the UK's wonderful National Parks (North York Moors) and count my blessings every day for people as far-sighted as him.


Thanks for the comments guys. It's amazing so little is known about him in the UK. His life story is full of adventure and the book tells of some his escapades is a very readable way.