Invent a Punctuation Mark - and defend it: Musings on the History of Exams by Eve Edwards

This year is a long dreaded year in our family.  I knew it was coming when I had my second child in 1998.  Two children, two years apart - that meant the time would come when we would have them sitting major examinations at the same time, both asking to be let off chores, both feeling the stress...
Hormones are enough to cope with but then add GCSEs/A levels on top - who thought that was a good idea?

As an involved type of parent on the Arts side (I'm a liability when it comes to Maths or any of the science subjects) - I have been looking at past papers and timetables.  It will probably come as no news to you that there is a debate as to whether exams are 'dumbed down' in the UK from the experience of previous generations.  Many readers of this blog work in education so will be all too familiar with this dispute.  This post isn't so much about that, though I do have a view which I'll put out for comment at the end.  No, what it prompted me to ponder was just what is the longer history of exams?  When did it begin to be thought of as a good way of sorting out the educational sheep from the goats?

I suppose the first requirement of a society to have examinations (beyond the obvious one of begin developed enough to have an education system) is to believe it desirable to appoint people on merit rather than through a hereditary principle.  Your king can become one because his dad sat on the throne but you wouldn't want your doctor to operate on you for gallstones just because his father had done the odd operation or two.  No sir, you want to know he has practised and studied for himself.

Many ancient civilisations had exams for young men to pass - that surely was the seed of the Olympics - a competition for all kinds of skills.  However, for the start of my history of exams, I was thinking of a national, written test in a form that modern school children would recognise. 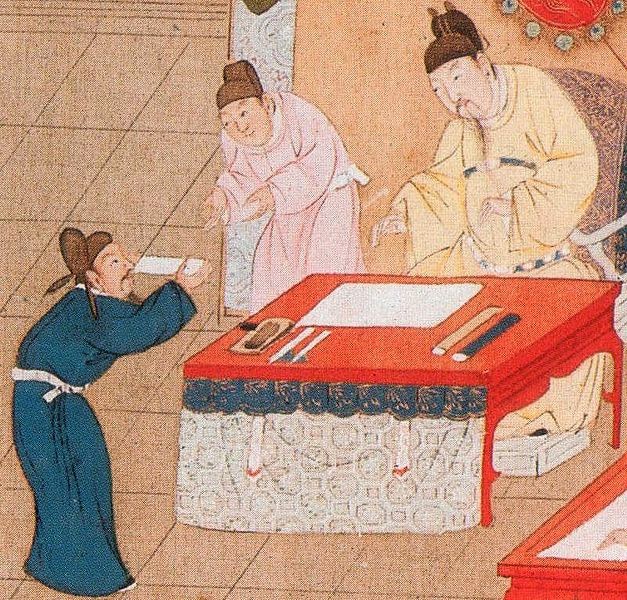 My money is on the Chinese being the first - as in so many things.   Their famous civil service tests may have started way back in the 7th century (we are in the mists of time here so dates are uncertain).  Then followed centuries of fluctuating fashions in education, not to mention changes in dynasty, but it seems that some basics remained in place: the idea was to find the best administrators to serve the emperor and it was possible for some of those in far-flung areas or from humble backgrounds to advance socially if they had sufficient skill.  At one point, the sought after skills included ability to compose poetry, which in my more fanciful moments I think we should introduce to our present day civil service.  Imagine your tax return coming in blank verse - or passport application as a limerick.  There was a young man from...

So if the Chinese get the prize as the society with the longest exam history, who has the most extreme?  This is a matter of opinion - medical training comes to mind - but for pure torture, I think BUD/S training for US Navy Seals might be up there - 6 months of basic underwater demotion/seal training.  It includes the aptly named 'Hell Week' when they try to put off recruits by pushing them to the edge and beyond their limits.  It fits my description because there is some paperwork among the physical torment.  And I thought my week of finals at Cambridge was bad.

And what about the most brain teasing exam in history?  I think this might go to All Soul's in Oxford who have a long an honourable tradition of interesting examinations.  The exam is held to select two Prize Fellows to hold their position for seven years.  I was just looking through the past papers and they are a hoot - especially the General Knowledge paper.  One question is 'Devise a new punctuation mark - and defend it.'  I'd love to sit an exam like that - a bit like wandering into Alice in Wonderland. 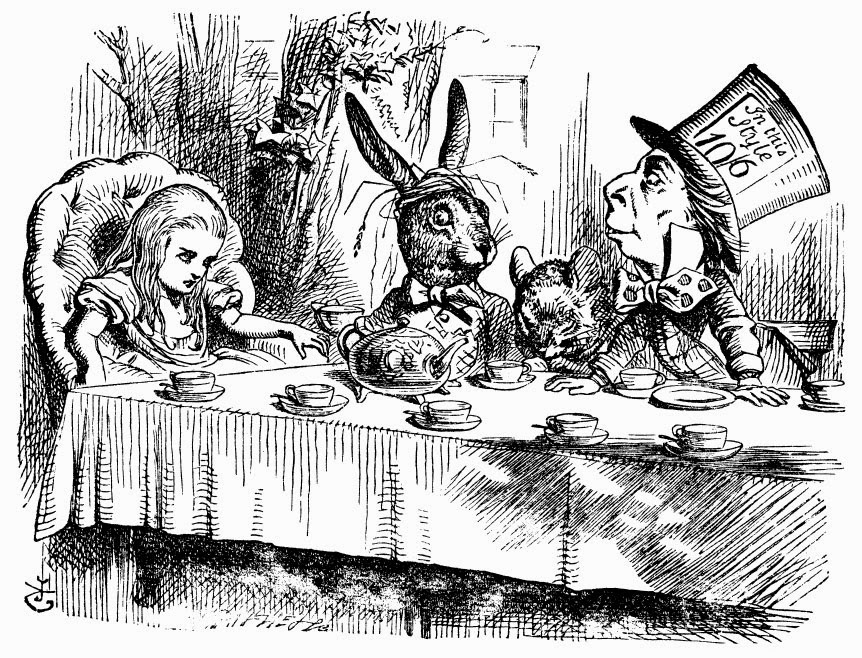 There is much more to be said on this theme but I think it is time I arrived back at today's examination students - are the exams they sit dumbed down?  The first thing I noticed was the length of papers.  The longest written exam at GCSEs that most students take is English language coming in at 2 hours 15 mins.  Hang on, didn't exams all use to be 3 hours back in the day?  I think there is a removing of that intense pressure - possibly for very good reasons - but it does seem a gentler exam experience now.  And content?  Well, I've been favourable impressed by most syllabi studied by my children in the Arts - history taught thematically, some interesting course work (compare the portrayal of a disintegrating mind in Macbeth and Frankenstein), but yes, I guess that some of it seems not very stretching and answers on the tick-box scheme.  But then, thinking back, we too had our shortcuts, our set answers, our 'predict what's going to come up this year' strategies.  Maybe the dumbing down accusation is because the industry of education makes this all the plainer thanks to YouTube videos and revision guides?  The craft of taking exams is more transparent.

I don't think GCSE exams were ever three hours - A-levels may have been. I remember a week of three hour finals exams though. I got through a lot of packets of Trebor mints that week - two or three per exam!

Well, in MacBeth, the guilty conscience acts as--

Oh, wait, you were being rhetorical. ;-)

We're having the opposite problem here in the States: exams are getting too hard, and too specific, and too not-having-anything-to-do-with-general-knowledge-or-what-teachers-actually-teach. It's a whole big mess, but the gist of it is that 8-year olds (and up) are expected to sit for two hours or more per day for two whole weeks, to tests that are being reported as having trick or nonsensical questions. So, yeah...

I'd love to try to come up with my own punctuation mark, though. That actually sounds fun!

In a favourite bit of the West Wing, the Chief Justice starts writing his opinion in verse. See www.westwingtranscripts.com/search.php?flag=getTranscript&id=81 and search on the page for "Chief Justice".