The Children and Puppet Thing - by Penny Dolan

Why children, I wonder?

On Monday, I went to the Victoria and Albert Museum to see the Shakespeare Puppet show mentioned by Louisa Young in her History Girls “Fear of Puppetry Overcome” post a few weeks back. 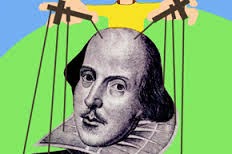 I took two children - 7 & 10 - and the noon-time show was the first public performance.

As well as displaying and demonstrating different kinds of puppets, the script was cleverly woven through with lines from Shakespeare’s great plays to introduce his phrasing and poetry, and very enjoyable it all was.

However, the quantity of very small children in the audience set me thinking. Why, here in England, are puppets almost always seen as something for young audiences? Even those magnificent Warhorse puppets – like the horse on display in the V&A Theatre Gallery – originated in a story written for children.

I started wondering whether this attitude had any historical link. Might our national response to puppets go back to the Reformation, and the destruction and defacing of so much religious statuary and images? Did that great ferment turn all forms of images into suspicious objects, especially any used in processions or plays and likely to deceive souls by seeming "alive"? 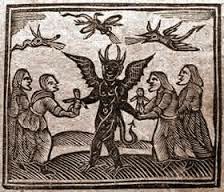 Did whatever puppets existed back then – in whatever was street theatre or as part of mystery plays -  become deceits of the devil and casualties of the Puritan view? Or were puppets far too close to  the venerated icons and miraculous statues of enemy Papist practices, and all those other suspicious customs of “foreigners”?

(European puppet companies still have a tradition of producing shows for adults as well as for children, and many other world traditions are intended for all ages.)

Would the fear of witchcraft or, worse, accusation of witchcraft, make people shun puppets in case such objects were seen as evidence of their crimes?  Were children's "poppets" and "babies", used to encourage mothering skills, seen as innocent when puppets themselves were not? 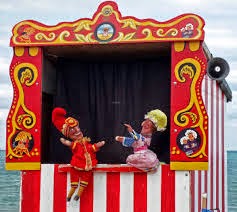 And if so, does that mean that Henry VIII, Good Queen Bess and Old Noll killed the English love of puppets? Note: I'm just wondering here. I don’t know, not yet. Do you?

However puppets are still around, hanging on at the edge of our culture.  We still have Punch and Judy shows, even though the rascal originated in Italy. Occasionally, the art of puppetry resurfaces in the theatre, or on our televisions whenever Spitting Image's satirical caricatures become newsworthy.

We still have human puppets like the “’Osses” of the mumming tradition, and speaking dolls like the ventriloquist’s dummy. Sometimes whole communities get involved with puppets: the town of Skipton has a bi-annual puppet festival and procession, next due in 2015, and not so long ago a huge Elephant puppet paraded through London to great audiences and acclaim.

Even so, I bet any publicity about a puppet show will be – unless there are very explicit warnings - read and seen as “for children” - and very little children at that. By the by, I once read that the violent destruction of so much religious art during the Reformation created such intense trauma that English visual tradition ceased. The main means of expression shifted towards words, which brings me very back nicely to the glory of Shakespeare’s language and that V&A puppet show.

ps. I'm rather fond of puppets and created an old Punch and Judy man as an important character in my children's novel. A Boy Called M.O.U.S.E. (Bloomsbury)

Posted by Katherine Langrish at 08:26

Skipton has a puppet festival? Since my day! I lived close to Skipton for many years and never heard of such a thing. I wonder when it originated? And I wish I hadn't missed it... I must try and go there for the 2015 event.

But what a fascinating post, Penny, and thanks for your thoughts on poppets and puppets.

You could say the same of fairy tales, couldn't you? :-). Those were never intended for children, AFAIK. Even nursery rhymes often had political origins. And as you say, there are non European puppets that aren't necessarily connected with entertaining children.

I remember a wonderful production of The Hobbit(okay, a children's story, but there were plenty of adults in the audience) which was mostly done ith puppets. The handlers were also the actors. Only Gandalf was played by a regular actor and when they needed someone who wasn't handling a puppet, eg Elrond, he wore a mask and was made to look like a giant puppet. The handlers wore black and masks and honestly, after a short time you forgot they were there. I also saw a very much adult production of a play called Cho Cho San which used some Asian-style puppets. An amazing art!

I love puppets, too, and went to a fascinating puppet museum in Lubeck a couple of years ago. There is a much stronger European tradition of puppet shows for adults. I also like Punch and Judy and included a show in Covent Garden in Sovay. There is a Punch and Judy man in The Box of Delights - any other examples?

Oh, I loved War Horse (book and stage play - not seen the film as I am irrationally prejudiced against it!)

Can I just say that I'm really glad I've found this blog. It's like having a bunch of intelligent, humourous, book-loving people pop into my house each day. :)

Becca - you're not wrong! And Penny - another very thought provoking piece.

I once took two 3 year olds to a marionette show and they were terrified, as I remember being terrified by a "laughing lady" at an amusement park. Neither I, nor the two children, were at all fearful in ordinary circumstances. By contrast, in the same theatre (the old and lamented Arts Centre in York) I saw a series of marionette vignettes which have remained with me for 30+ years! American, I think. The puppets were amazingly crafted and fine enough to sit at a table and write a love letter convincingly. Stunning. Schwäbisch Hall in Southern Germany also has a thriving marionette theatre, and automata as part of the street furniture.

Thanks for all the memories and suggestions, everyone, and welcome here, Becca. I love reading everybody's HG posts too - one never know what delights, facts, images or ideas are going to turn up!

When I was (groan) little, Sue B, there seemed to be a big thing about "not being able to see the puppeteers" and it is such pleasure that this no longer matters to audiences. However, the suspension of belief involved in a good puppet performance seems to add such poignancy to the gestures and movements of the characters that there is a kind of magic.

Sadly I can't think of other book examples, Celia. Maybe the nasty moral shadow of the Pinocchio story did for literary puppet shows?
I never knew about the Puppet Festival either, Kath, because where I live is in another "arts marketing area." Only found out about it by chance.

An aside. Carol G, I use a sheep puppet (with a very limited repertoire indeed) when doing story sessions with little ones, and I always watch their faces for signs of that awful fear!

In earlier days I wrote a number of puppet plays for a single puppeteer - it was an interesting challenge have multiple characters but only two possible on-stage movers!

I saw Don Giovanni performed as a puppet show in Prague, with a recorded sound-track. It was amazing and definitely for adults. Also, do you know that the great German writer Goethe encountered the Faust story first through a puppet play, based on Marlowe's Faust, which was going the rounds in Germany? The puppet Faust is also present in Jan Svankmajer's eponymous film, again, definitely for adults.