Writing What You Know - Lucy Inglis

When writing non-fiction, there is a definite process for constructing a body of research and then drawing upon it for a book. The more sound and extensive the research, the better for the book. The framework is also more rigid. Writing fiction is a different process in terms of creative freedom, but sometimes solid research pays off. I'm currently finishing a historical novel for Young Adults, and I was excited by the prospect of this particular project. On mentioning that I was working on a historical YA, pretty much everyone assumed it would be set in the eighteenth century and almost certainly in London. But it's not. It's set in nineteenth century America, a period I have absolutely no knowledge of. Why? I don't know. I knew the story I wanted to tell, but how to make it real was key. I also knew how irritated I get with lazy historical fiction. If I ever read another novel set in the eighteenth century where all the women are simpering misses and every surgeon a filthy-pawed walking pesthouse, I shall scream. So, when I wanted to write about Montana during the goldrush and the massacre of the American plains bison, I thought I'd better do my homework. 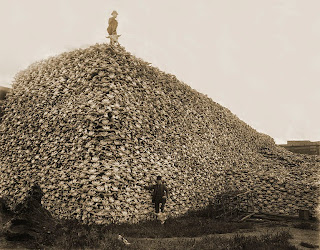 The internet is, of course, brilliant for images and information about flora and fauna, dates and facts, but the meat of getting to know another time is more likely provided by real stories about the people who lived then. Did you know that Civil War soldiers favoured licking morphine powder out of the palms of their hands to deal with pain because it was quick to take effect but also slower release? Or that the Colt revolving rifle, so popular during the Civil War, had a nasty habit of discharging all six shots at one if not kept immaculately clean and dry? Pretty tough during war. Or, that native Americans saw sex as a social exchange and expected a gift afterwards, even if it was a shirt or some elk teeth, as a symbol of that exchange, leading settlers to get thoroughly confused about issues of morality, consent and 'price'? I don't ever want to butcher a bison, but I think I could talk someone through which bits are used for what and how kidney fat is the real delicacy. I know far too much about corsets, pioneer marriage statistics and I've come across some fantastical given names: Relentless and Helpless my favourites so far.

Most of this research will never see the light of day. Let's face it, a lot of it is pretty dry bones. But it has given me the confidence to construct characters. It's handed me plot mechanisms that save me from relying on 'happy coincidence' - a thing that irritates even when done in a masterful fashion and shows little respect for the reader. Yes, fiction is about making things up, but it's far more satisfying to make things up that you know may have happened. Is it any good? Well, that's not for me to decide! 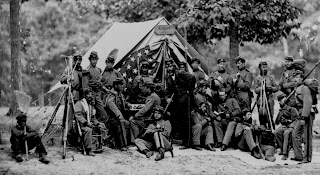 Looking forward to that - gruesome but fascinating!

So interesting - and original. Very much looking forward to reading this, Lucy.

Great post- your upcoming book sounds awesome. I completely agree with your stance on proper standards of research in historic fiction.

Please tell me that top photo isn't a hill of bison skulls? The bottom one is interesting - Matthew Brady?

It's good to go to the primary sources, I think, once you have read some reliable secondary ones and know what you're looking for.

Absolutely agree with getting it right and learning new stuff while you go!

Enjoyed reading this post and seeing the photos. There seem to be two schools of thought when it comes to research - do lots of research and then write, or get stuck into writing first and do research when needed.

Or there is the school of thought that goes with doing no research at all...hence simpering misses and historical stereotypes...