The Warhorse in the 12th and Early 13th Centuries by Elizabeth Chadwick.

The other day there was a discussion on a historical list I'm on concerning the warhorses that would have been around during the days of William Marshal - knight par excellence in the mid 12th and early 13th centuries. The Ardennes breed (example in photo) was suggested as the type of great beast that William would have ridden to high success in the tourneys in which he took part. 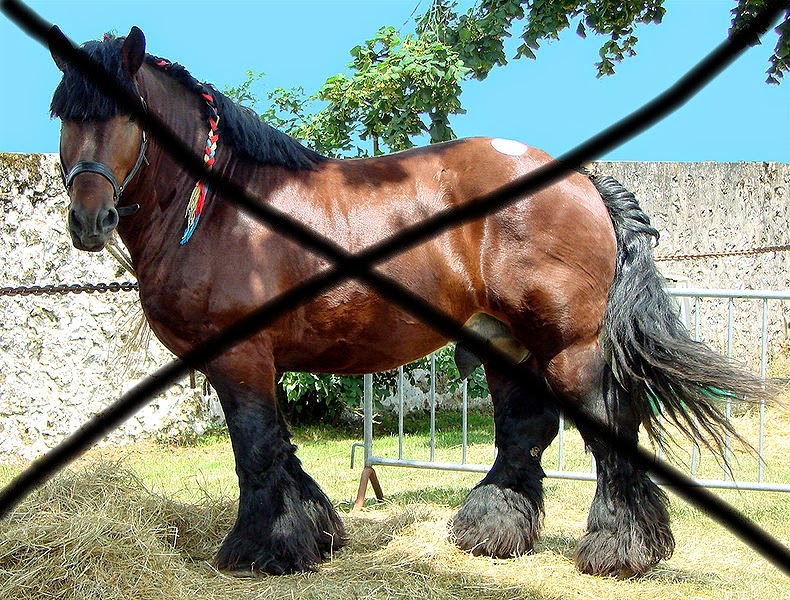 It's amazing how this stereotype continues to prevail despite the amount of research that has been done on the fighting horses used at this time in history and despite all the pictorial and historical evidence we have to show that the medieval warhorse of the 12th and 13thc's little resembled the animal above.

As horse historian Daphne Machin Goodall says: 'The shire horse type may be comfortable at the walk, but he would be impossible at the trot, and heaven help the knight if his steed broke into a canter.'  As Tim Severin found out when he tried to ride an Ardennes cart horse to Jerusalem and ended up having to have a special saddle made before he could even sit the horse!

So, what do we know about the medieval warhorse of this time?
Anne Hyland, a historican of equine matters, carried out detailed assessments of horse in relation to horse transport ships and came to the conclusion that 'early medieval destriers were of a very moderate size!
'I estimate the build as stocky, and a height range of between 15 and 15.2 hands.'
The heavy horses of today are bred for haulage.  Weight to pull weight.  Even those said to throw back to the war horses of the Middle Ages have been bred to be taller and weightier than their ancestral counterparts. By the Tudor period Henry VIII was declaring that no heavy horses under 15 hands were to be kept for breeding, but that was not true of earlier centuries.
The ideam 12th and 13thc medieval warhorse wasn't bred to pull weight.  it was bred for speed, responsiveness, and to withstand the short, sharp shock of the charge and clash. In other words far more like a steer roping horse (an American Quarter Horse for example)  than a draught animal. It had to be sturdy enough to bear the weight of a man in a mail shirt and chausses; and to exist on what fodder was available in times of battle campaign. It also had to be trainable, intelligent and feisty but not umanageable.
Breeds are not mentioned - it was too early in history for that, but countries and regions sometimes turn up as providing the most desireable beasts. Spanish horses were hugely valued. William the Conqueror was presented with one on the eve of Hastings, and Norman baron Robert de Belleme had a stud of Spanish grey horses that he grazed on his Welsh Marcher lands. Arabian horses were prized too and one Oliver de Rohan brought nine of them back from the Holy land to run on his pastures.
In the Histoire de Guillaume le Mareschal, horses from Lombardy are highly prized, although there is no indication as to what these kind of mounts might have looked like.
You will often find the Percheron horse cited as the descendant of the destrier, but don't be taken in by today's beautiful modern greys, active and fine though they are.  The medieval warhorse that came from the Le Perche region of France was 'of less massive conformation and generally brown in colour. In fact the early horse of le Perche, looked much like his neighbours, the Breton and Norman cobs.' So says Daphne Machin Goodall in her 'A History of Horse Breeding.'  She also makes the point that if such wonderful horses had existed in Charlemagne's time, he'd have been portrayed sitting on one of them to display his might, and not a basic cob! 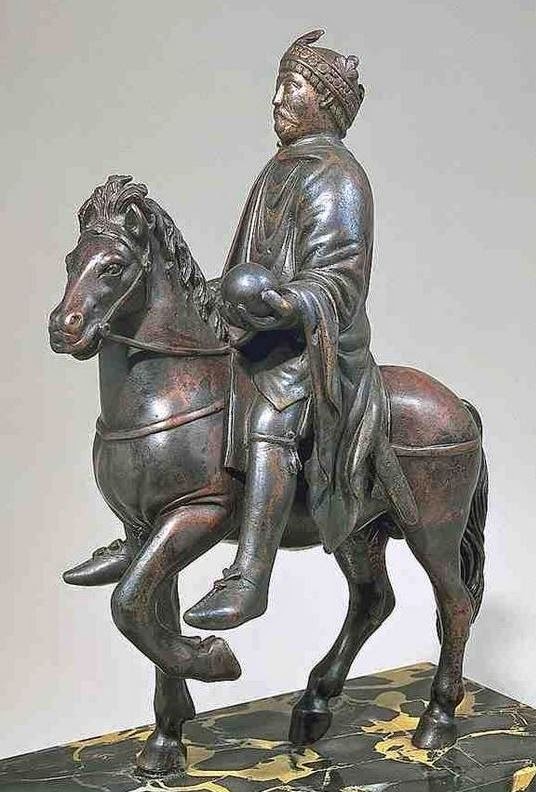 So, if someone was looking around in today's market for a horse that best resembled the look if one was to go back in time to watch a tourney, what would one be looking for?

Possibly an Andalusian - a Spanish horse of ancient lineage and the correct characteristics.

Or perhaps a Morgan horse - a breed believed to be suggestive today of resembling the destrier type by historian Matthew Bennett. 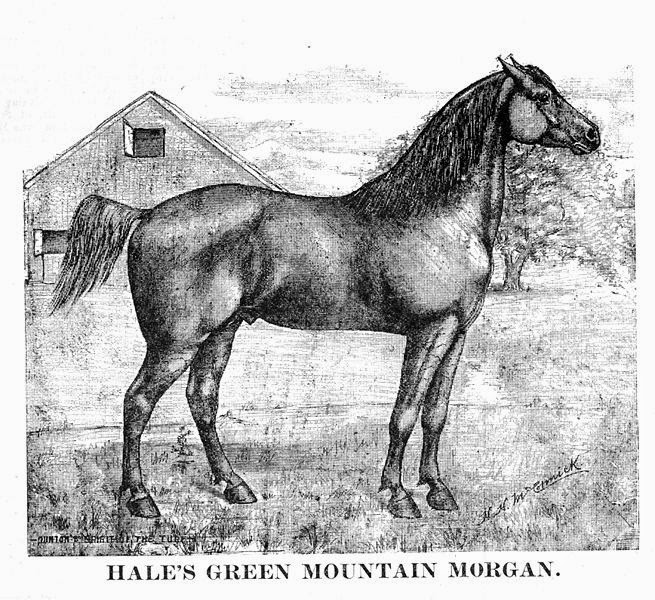 Or perchance the Welsh cob. 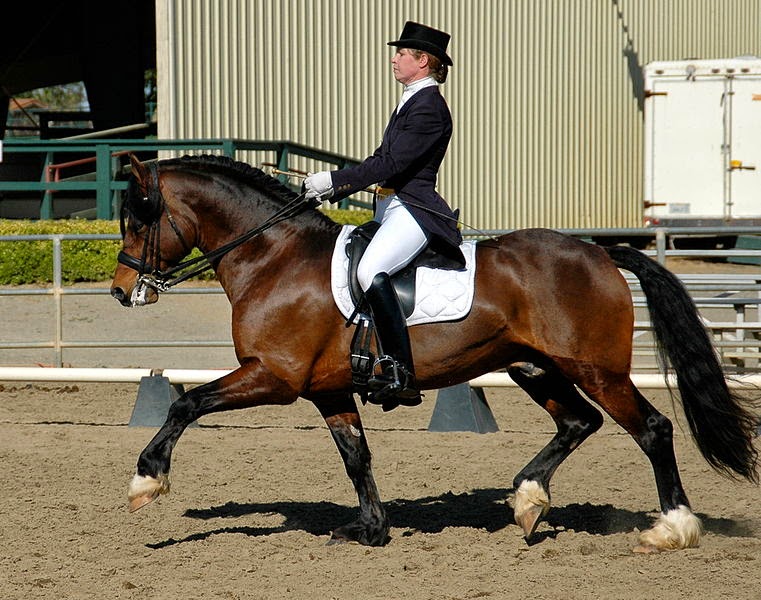 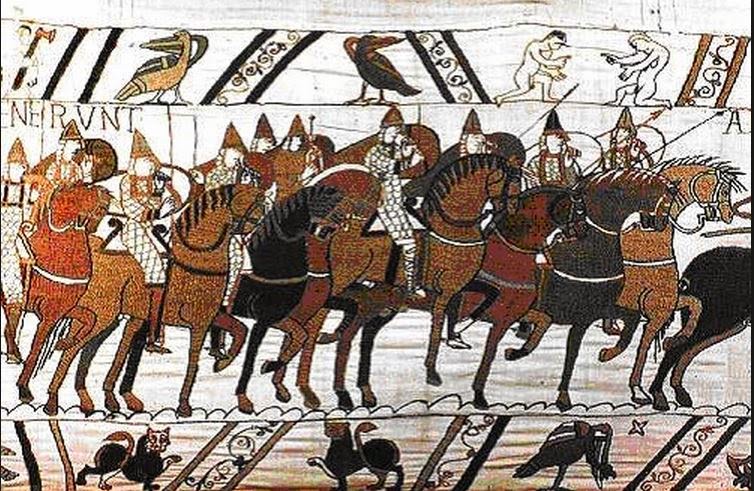 For anyone further interested, there is a clip of a modern destrier in Terry Jones' programme on the crusades at 38 mins 54 seconds. Medieval warhorse, example of the type

Really interesting and informative. I was lucky enough to see the Spanish Riding School of Vienna on their Andalusian stallions showing alongside modern dressage horses and that was an eye-opener! They are much more stocky with barrel-like bodies, far closer to the Medieval images than the modern riding horse. I think for anyone wanting a good idea of what horses used to be like should have a look.

I must admit, much as I love the image of a great king astride a powerful horse, anyone with half a brain could look at that horse at the top and see it's just not feasible! That's the sort of horse that would look impressive but as you say be utterly ludicrous to consider for riding into battle at any sort of speed!

Interesting post, although I must admit my first reaction was an awed 'WOOOOOAH. ENORMOUS horse'. I think I just realised how much of a city girl I am :)

Now there's a coincidence - I went to Chepstow Castle today, and bought a copy of your novel about William Marshall - came home and looked at the History Girls, and here you are!

Great post, Elizabeth! And if anyone wants to get more ideas on what the body type might have looked like, they should youtube the battle moves these horses were trained to, most notably the levade, where the horse must rise on his hindquarters to shield a rider. The move requires powerful haunches and short, stocky build. I can't imagine a modern Percheron assuming and holding that position.

And some of the fancy side-to-side legwork standard in modern dressage competitions no doubt originated with horses who had to keep theri feet moving any which way over unexpected obstacles (like spear-shafts and other downed men and horses) on the battlefield.

Another dressage standard is the direction of the horse entirely through seat and balance, which would be necessary if both the rider's hands were busy with weaponry.

And I can see why Arabian blood would have been valued. Desert-hardy genes produce a horse that can thrive on scrubby brush. Many campaigns succeeded or failed not because of the skill or weaponry of the army, but because of the food that was--or in some cases, was not--available for man and beast.

Having had a half shire to ride as a teen I would agree that they make pretty horses to pull but long distance is not fun, and getting the right tack is a challenge in itself. I love the idea of big medieval horses, but I know the costs and practicalities would mean a smaller more useful mount. Thank you for laying it all out so clearly.

This is the type of detail that makes me smile for the rest of the day. Thank you.

Whoah! HORSES!!! (My secret passion, as those of you who read my books will have probably guessed.) I've ridden Andalucian horses and they are really strong and tough as well as being quite lively, so would seem to be a good candidate for a warhorse.

Great pictures, and I love the way there seems to be a big cross over that first heavy horse...

Thank you so much. So, would a palfrey be gained like. Tennessee walker or a Morgan horse?

Great post! Glad to see you cited Goodall and Hyland. As for modern breeds, Hyland suggests the British Hunter. When I talk to my fellow Yanks, I just point to the American Quarterhorse I grew up riding.

Your post is informative to a degree.
As it is history the correctness will always be debated to on degree or another.
The only point I find that I feel the need to correct is the statement about draft horses.
It is correct that the draft in its current form was not the horse that knights were riding. But the notion that modern drafts are somehow "unridable" is grossly incorrect.
I have been training draft horses to work under saddle for almost 20yrs.
I have competed on them in armored jousts and have shown them in western reining.
I have worked Clydesdales, shires, percherons, and others. And all of them do really well under saddle.
It's unfortunate that "historians" make statements about things they have never actually researched.
This is why "facts" are always being debated.
It was a nice article but make sure to check sources.

Thank you for comment David Schade,
I have checked my sources thoroughly and as you can see from comments above too, several people do remark that they have found modern draft horses difficult rides. I am glad that your own experience has been different and it is a nuance to add to the matter.

Was the historian familiar with horses? Because I havn t found draft horses do work under,saddle but it is obvious you have to have some horse riding skills

Oops, sorry, so many typos.