When Rob and Millie's father goes missing in action while serving on the Western Front during World War One, the children desperately search the hospital trains returning to Edinburgh with the wounded. But there's no sign of him….

The above is part of the blurb for GHOST SOLDIER my new book on World War One for mid-range readers. 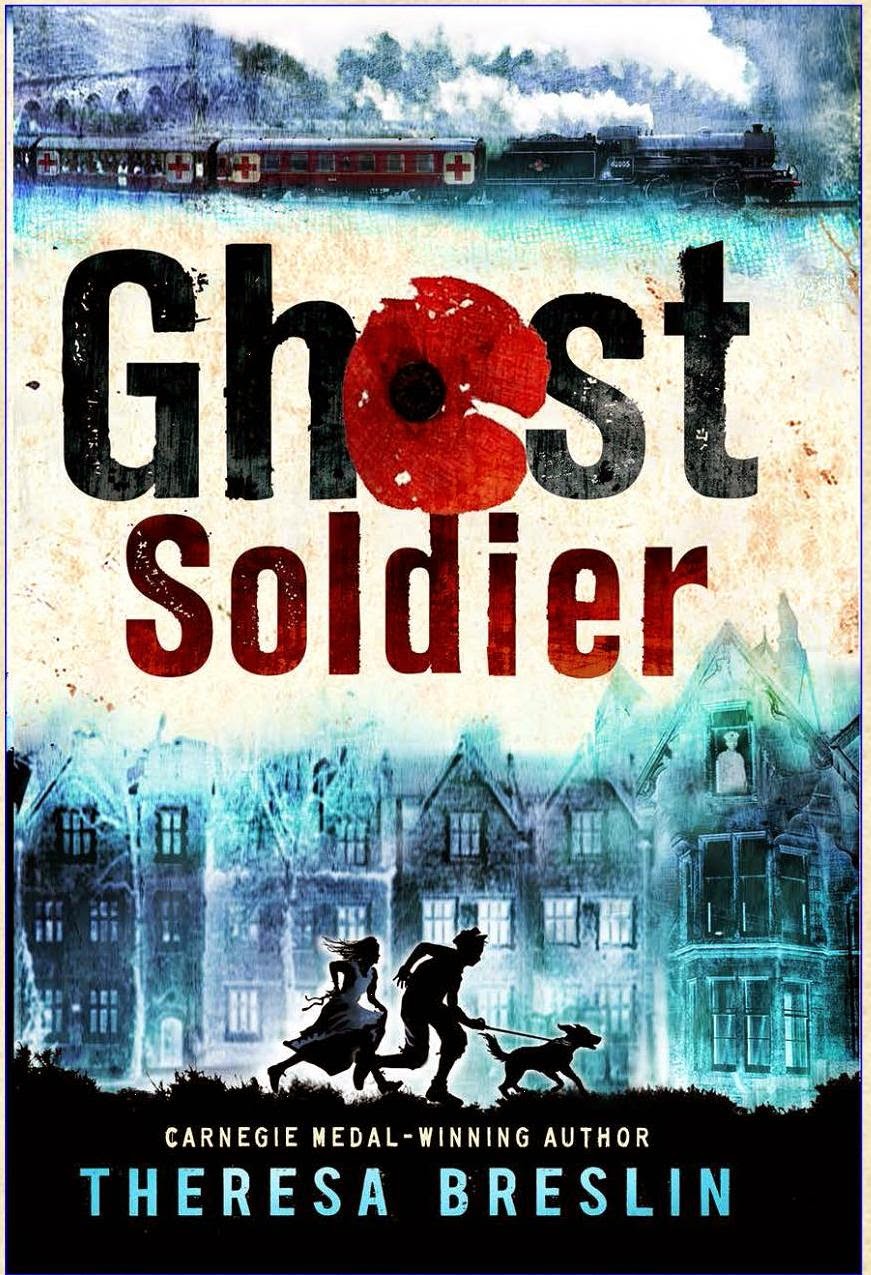 The story is a fusion of many disparate ideas that have been gathering in my mind over a number of years: the mainly untold stories of children on the Home Front during the Great War, a close focus on the effect on young children when a father, brother, uncle goes away to fight, and more. While doing research and trying to pull these together into some kind of structure I became quite fascinated by the ambulance trains that operated both abroad and in the UK and I determined that they would feature in the book.

One of the challenges in writing any kind of fiction is creating what could be termed ‘a credible story line’ I’m sure many of us have met people who, upon discovering that you are a writer, say “I’ve got a good story for you. You’ll never believe this, but…”  Then they go on to relate some fantastical experience, often involving bizarre coincidences. The tale turns out to be true but you simply cannot use it.
With Ghost Soldier the sequence of events happened in reverse.
Following the outbreak of the First World War, Stobhill Hospital in Glasgow was requisitioned by the authorities to be used as a military hospital. A spur railway line was built so that ambulance trains could bring the soldiers directly to the hospital grounds. In recent years, when the old Stobhill Hospital was being demolished to make way for the new one, an appeal went out for anybody connected to the hospital to send in their memories to be recorded. I had blocked out my book and was on a third draft before I got to grips with this archive. In my story the child characters, Rob and Millie, sneak on to a hospital train in a desperate attempt to lo locate their ‘missing-in-action’ dad. They’ve already had several brushes with a possible ghost, a clash with a army procurement officer who wanted to take away their sheepdog’s pups for training as war dogs, and we had just got to the most exciting bit where Nurse Ethel… - but I mustn’t spoil it for you.
Anyway, I took a break from the creative writing to do some top-up research. To my amazement I came across this. One of the contributions to the Stobhill Hospital archive for the years of WW1 was from a gentleman called Mr Lister who remembered his mother helping with the wounded soldiers:
'...during the First World War the troop trains of wounded used to come in on the railway line, which ran then round the back of Stobhill Hospital, just at Littlehill Golf Club, (where we lived) and my mother, when she saw a train of wounded coming in, used to run down and see if she could help, you know tea and sympathy, that sort of thing, and...
…she went down to this troop train this day, and the first stretcher off was carrying my father's brother, who nobody had heard of for two years...
He’d been brought home from Gallipoli having been gassed first and then wounded and he was on the first stretcher off the train…
She recognised him…”

They say, ‘you couldn’t make it up’ but I had done that very thing.
At the beginning of World War One the first method of transporting wounded men by rail could hardly be termed an ‘ambulance train’. They were in the main wagons which had been used to move cattle and goods about. Scrubbed clean and filled with fresh straw they were used as makeshift units to ferry men from the battlefields to military hospitals within France. As the war progressed however and the number of casualties increased instead of diminishing, then more planning and thought went into improving the conditions for patients and medical staff in transit. Still using French rolling stock units were put together to make trains which provided treatment carriages with wagons made into wards and having a pharmacy and quarters for medical staff. But it wasn’t until nearer the end of 1914 before special constructed ‘Hospital Trains’ arrived from the UK.
It is possible to find references to and quotes from newspaper articles and journalists who witnessed the soldiers being helped onto the trains. These do describe horrific wounds and can make distressing reading but the plethora of postcards and cigarette cards paint an altogether jollier picture with chaps smiling and hailing each other, supposedly coming from the battlefields but wearing impossibly clean and smart uniforms. The stories of the incredible dedication and bravery of the nurses working on the trains would fill another book e.g. making their way from carriage to carriage via the footplate on a moving train before corridor trains came into use.
And as I go I’m garnering my information, hoarding glittery bits hoping that they might come in useful. The Queen Alexandra nurses have a red cape – yes definitely – that’s definitely a shiny little nugget to be polished very carefully.
Ambulance trains were used in France and Belgium, but as the war went on they were also used in Britain to take wounded men to hospitals set up in a number of the big cities. Regional railway companies donated units and others were financed by public and private subscription. Thankfully corridor coaches were introduced. By the time they arrived on the train in Britain the men’s wounds had been assessed as they were processed through receiving sheds in the ports before being dispatched onto the trains.
Going from the Channel ports in the south of England extra lines were created so that the train could travel directly to the designated hospital. I do think that, in addition to efficiency, there was another reason for this. It prevented the public from seeing the tremendous number of casualties. It was short stretch for me to imagine that the trains would also stop at remote locations to take on water – vis. near the farm cottage where Rob and Millie live - giving them the opportunity to try to find out what happened to their dad.
I hope I have managed to get the technical details right. – I’m sure I will receive Tweets and Facebook messages if I have made an error re train engine, tender, carriages, taking on water etc

In addition to the research on hospital trains and visiting the Battlefields and the Imperial War Museum other small unexpected pieces slot into place. In that serendipity way that writers some across unusual items I was researching something else and browsing through a very small museum contained in the library of a seaside town – no more than a large room - when I came across a WW1 board game. It had tiny cardboard figures of soldiers and officers and men in Allied and German uniforms. I’m still working out the rules but it became a link to the illustrations within the book.

In Remembrance some of the pity of the war is evoked by quotes from the poetry of Sassoon but also because, interspersed with the titled sections of the book, are some beautiful sketches by Jason Cockcroft. With muted tones; soft white, black and charcoal greys, the poppies, daisies and cornflowers are shown flowering among the ammunition boxes.

In Ghost Soldier the chapter headings are by Kate Leiper who was the artist for An Illustrated Treasury of Scottish Folk and Fairy Tales She has captured innocence and  simplicity, coupled with the inherent dignity, of the children, and the poignancy of the lost childhood toys of the real Ghost Soldier.

NOTE:  Theresa Breslin is appearing at the Edinburgh Book Festival on 13th and 19th August 2014.

I think sometimes when you get so close to a subject, researching it, you just home in on something that actually was, perhaps because of the collective unconscious, or just because you have got so much information, your mind comes up with credible possibilities. I found out about the de luxe trains of Nazi leaders after I had invented one for Last Train from Kummersdorf. I find the detail about sparing the public the sight of real wounded soldiers chilling, yet totally convincing. I remember when I saw Gone with the Wind, I was with my mother, and she told me apropos of the wounded of the Confederate Army being brought in: 'I saw our soldiers come in like that.' I'm sure not the least of the traumas of defeat is to see such sights, and to hide them would be a priority in maintaining civilian morale


Gosh that is weird re the de luxe trains for Nazi leaders, Leslie. It must have made you shiver. Good point about civilian morale. One strand of our family are fisher folk and they've often said (as they were involved with the merchant navy and mine sweeping etc ) that the tonnage lost in the convoy ships during WW2 was way above the official figures released to the newspapers. Thanks for the comment

The first casualty of war is truth, eh?