Last month I wrote about coming across a monument to the once-famous author, Catherine Sinclair, and I’m glad to say that it looks as if we will be able to rustle up a little fuss for her in August, on the 150th anniversary of her death.  I’ll keep you posted on that.
In the meantime, I’m staying on the monuments theme. No doubt, like me, you often walk past familiar landmarks hardly knowing why they are there. Sometimes it’s impossible to find out on the spot.  What seemed obvious cause for commemoration when a statue or sculpture was installed now needs an explanation, and too often there is nothing to read.  That’s why I was so glad to come across this obelisk, which is a storybook in itself. 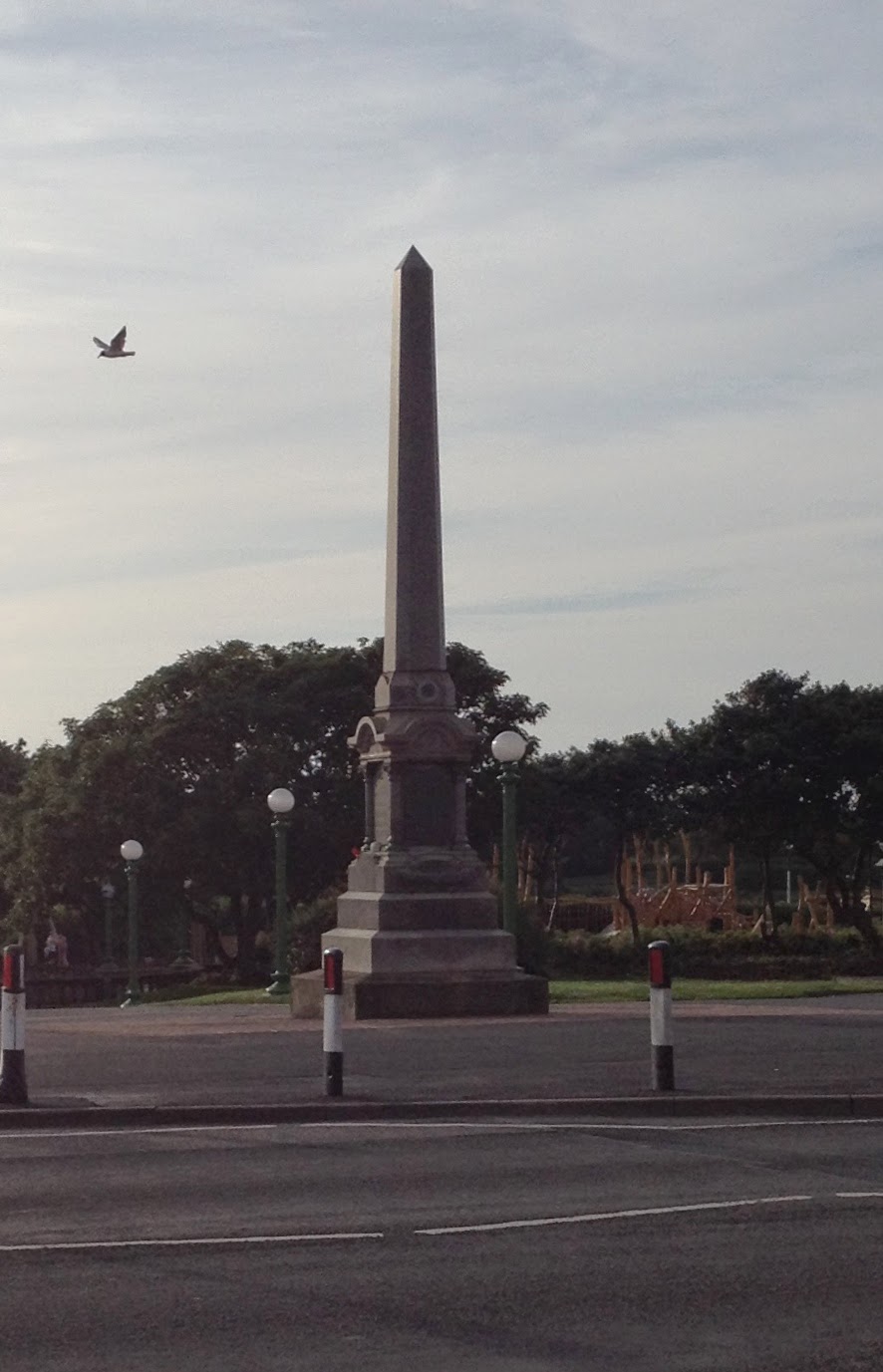 I was in Southport for an awards ceremony (my book The Last Minute was shortlisted, and to my amazement, it won). The weather was balmy, and I went for a walk through that gloriously elegant Victorian  seaside town.

Here’s what I found, and I’m glad to say that I can tell you all about it simply by transcribing the (lavishly punctuated) inscriptions around its base.
First, there’s a wonderful evocation of the mix of private philanthropy and civic pride that characterised the late Victorian age: 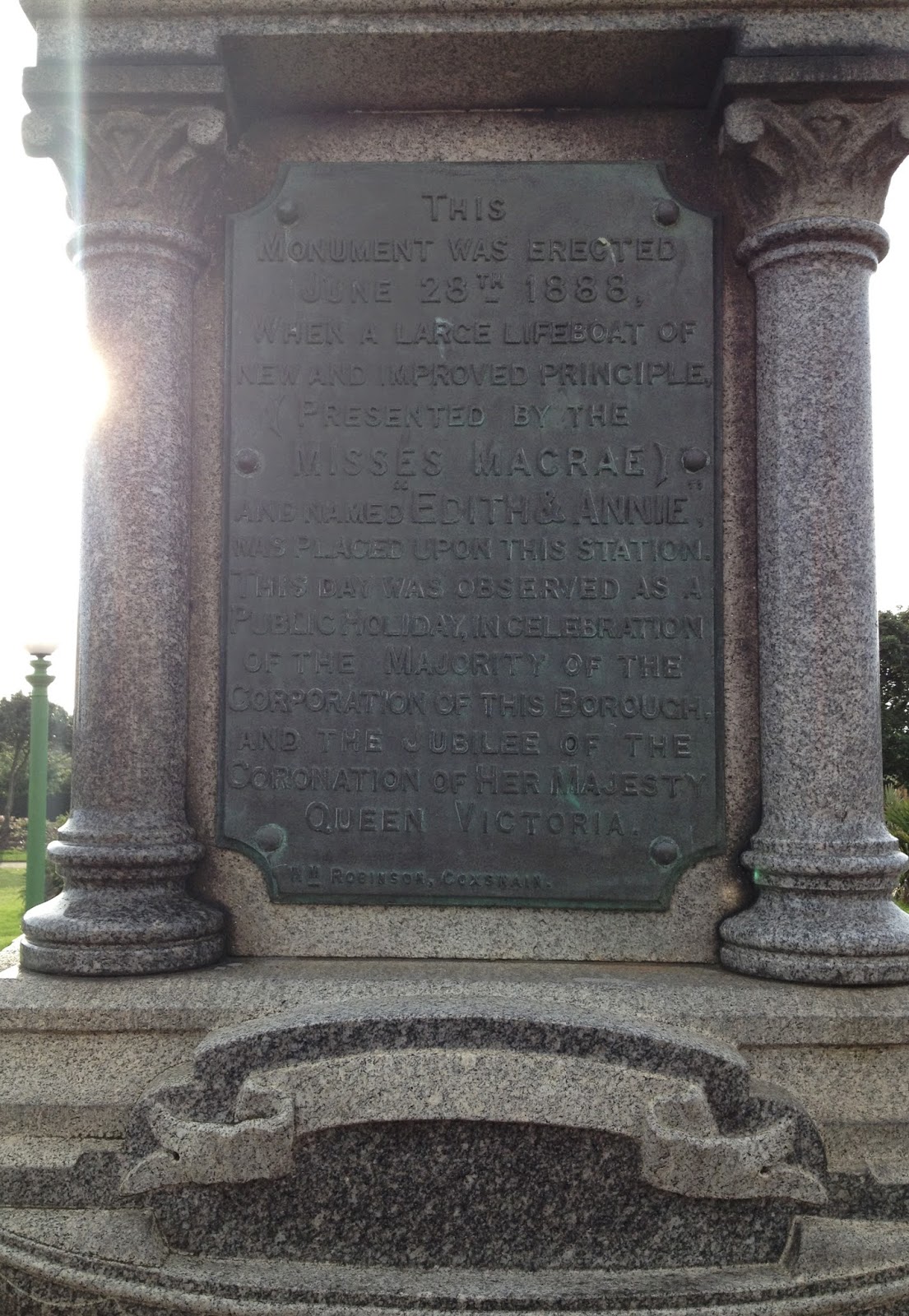 THIS
MONUMENT WAS ERECTED
JUNE 28TH 1888,
WHEN A LARGE LIFEBOAT OF
NEW AND IMPROVED PRINCIPLE,
(PRESENTED BY
THE MISSES MACRAE)
AND NAMED “EDITH & ANNIE”,
WAS PLACED UPON THIS STATION.
THIS DAY WAS OBSERVED AS A
PUBLIC HOLIDAY IN CELEBRATION
OF THE MAJORITY OF THE
CORPORATION OF THIS BOROUGH,
AND THE JUBILEE OF THE
CORONATION OF HER MAJESTY
QUEEN VICTORIA.


I’d love to find out more about all those people, and even more about the events listed on two other sides of the oblesik: 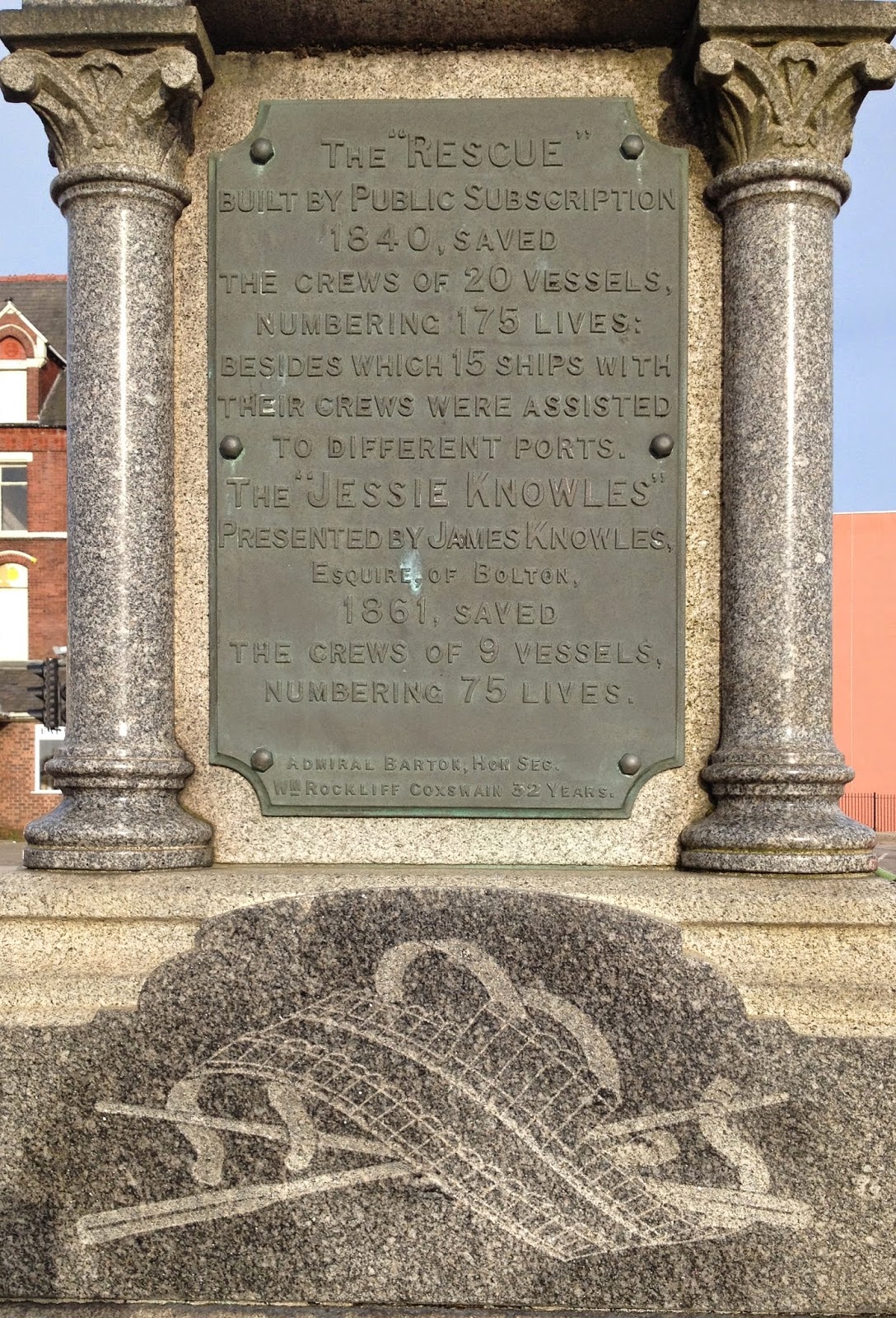 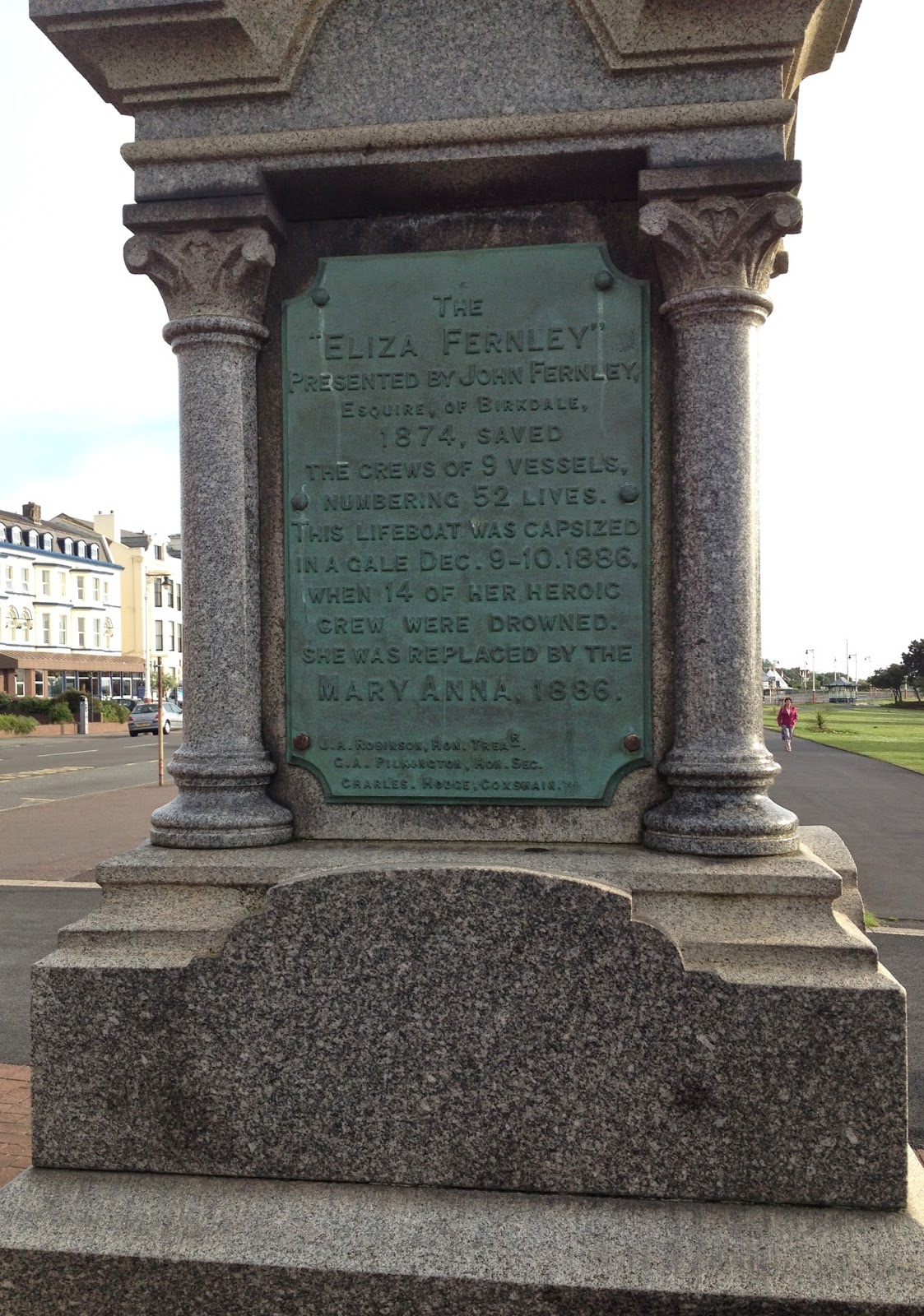 THE
"ELIZA FERNLEY”
PRESENTED BY JOHN FERNLEY,
ESQUIRE OF BIRKDALE,
1874, SAVED
THE CREWS OF 9 VESSELS,
NUMBERING 52 LIVES.
THIS LIFEBOAD WAS CAPSIZED
IN A GALE DEC. 9-10.1886,
WHEN 14 OF HER HEROIC
CREW WERE DROWNED.
SHE WAS REPLACED BY THE
MARY ANNA, 1886

But the best part of all is the inscription on the fourth face: 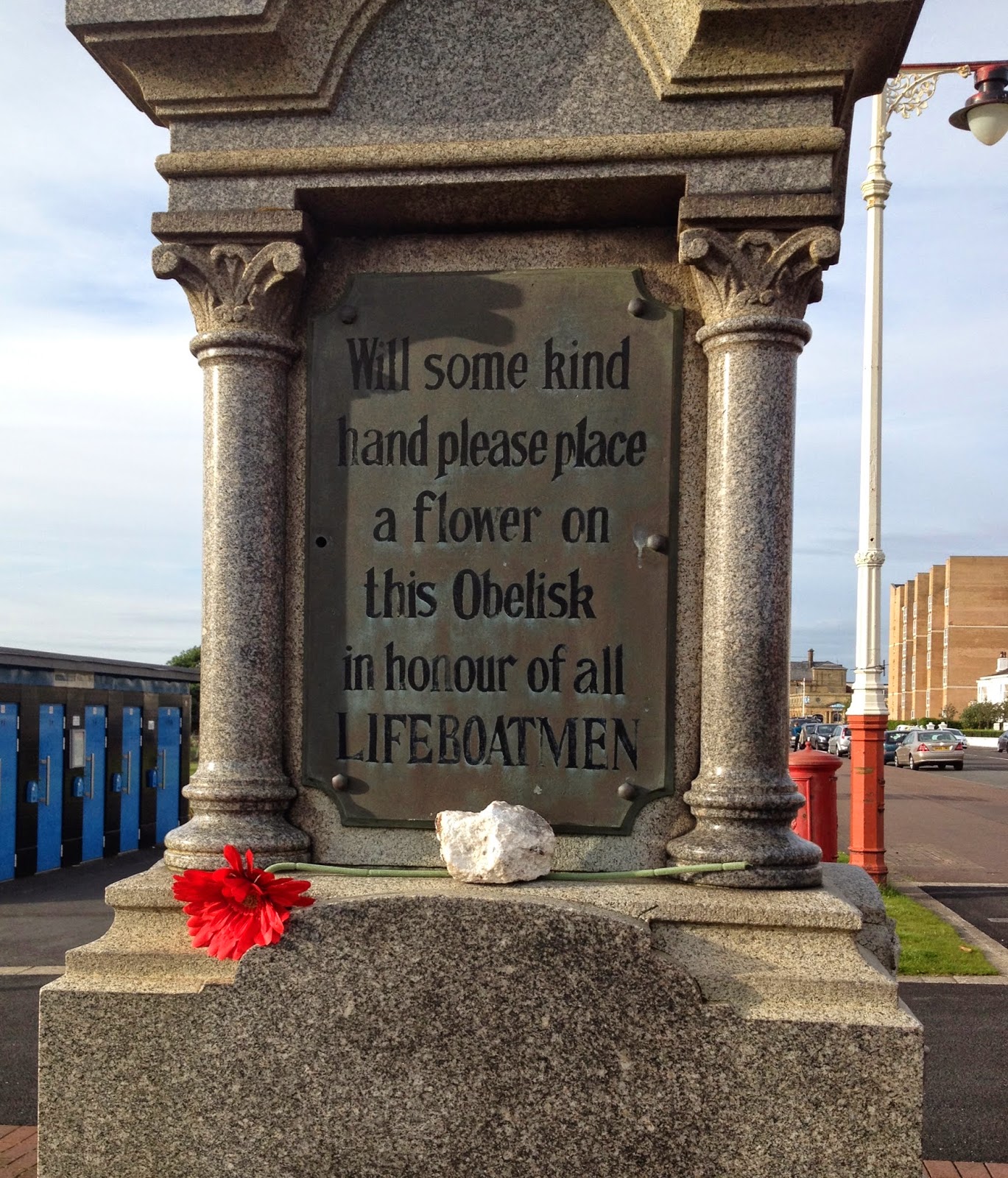 
And what a joy it is that someone has done exactly that.


This business of leaving flowers can be tremendously emotionally powerful. 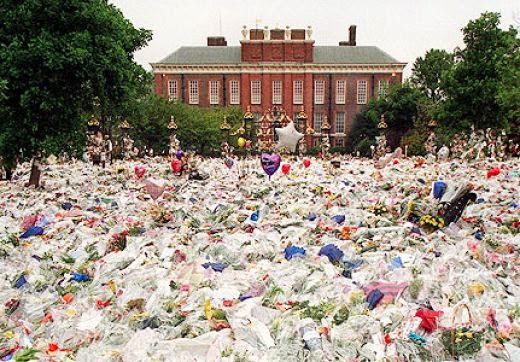 It can be awful (in every sense) of course, I can’t be the only person who was taken aback by the sea of cellophane outside Kensington Palace after the death of Princess Diana, to say nothing of the the horrible sign near a London florist at the time of the Soham murders in 2002 (‘You can send flowers to Holly and Jessica from here’).
For a while, I worked on the Mile End Road in London, where there always seemed to be bunches of flowers tied to railings, marking the latest spot at which a pedestrian had lost patience with the incredibly slow traffic lights. They never failed to bring home the tragedy of a life suddenly cut short.  The white ‘ghost bikes’ at the scene of cycling accidents in London have the same effect on me.
But sometimes flowers, and particularly a single flower can be remarkably uplifting.  Wouldn’t it be nice if we all adopted a neglected grave in a local cemetery, dropped by with the occasional flower, and maybe even tried to find out something about the person buried there.
That lovely tribute to lifeboatmen, nearly 120 years on from the erection of the Southport obelisk, fills my heart with admiration for everyone involved - including the mystery person who placed the latest bloom there.

Lifeboatmen have been my heroes for years. This post is haunting. What a wonderful idea to leave a flower on a forgotten grave, remembering an unknown someone. Thank you, Eleanor. (Congrats on the award).

A really wonderful post and I am SO GLAD that the Last Minute has won a prize. Loved it!