The Pitt Rivers Collection may be more reputable, but if you’re ever in Yorkshire, do visit Whitby Museum & Art Gallery in Pannett Park. It’s a delightfully impressive oddity, belonging to the Whitby Literary and Philosophical Society. When the society was founded, back in 1823, its objective was to form and run a museum “with some pleasing subjects for study and as an object of attraction for strangers.”  Or Education and Tourism, though more pleasingly put.

The Whitby Museum certainly attracted this stranger. Where else could I have found such a superlative collection of fossils, an extravaganza of carved jet jewellery, a case full of gingerbread moulds, ships in bottles and lightbulbs - and a Hand of Glory? And more besides, saved for a later History Girls post. 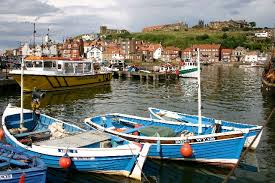 Whitby, an important whaling port, had gradually been growing into a fashionable Victorian resort. The town’s Museum was initially above a shop in Baxtergate but by 1827 was relocated to the top floor of an impressive waterfront building on Pier Road. As the ground floor housed the public baths, visitors could cleanse and educate themselves at almost the same time.

All kinds of donations were accepted, and, in 1931, the Museum moved to a purpose-built location in Pannett Park.


The interior is rather like a museum of a Museum, and to my mind, all the better for that. I relished its slightly old-fashioned look and felt nothing but delighted curiosity about all those who had 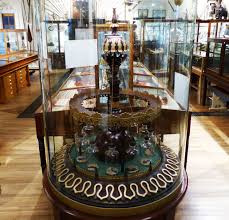 contributed their enthusiasms. There are no brash visuals, no sound effects and no “interpretations and almost all the notices are of the once- familiar typed-card variety.

Gathered snugly inside wooden cases, many of the small collections seem idiosyncratic labours of love. This is what makes the whole so varied and intriguing, and so ideal for searching around. This is the kind of Museum that makes stories, big and small, rise in the mind.

So, almost with trumpets, I bring you one of the many fascinating objects: The Tempest Prognosticator, invented by Dr George Merryweather, Curator of Whitby Museum (1840 - 1860.) During his medical practice, Merryweather had observed that leeches were particularly sensitive to the atmospheric conditions generated before the occurrence of electrical storms.

In 1850, knowing how often storms brought danger and damage, he invented the Atmospheric Electromagnetic Telegraph Conducted by Animal Instinct or Tempest Prognosticator. His invention composed of twelve glass bottles, all set around a circular stand under a bell which was surrounded by twelve hammers. Each hammer was attached by wire to a piece of whalebone set loosely into the neck of one of the bottles.
According to Merryweather,  “Into each bottle is poured rainwater to a height of an inch and a half, and a leech is placed into every bottle, which was to be its future residence. When influenced by the electromagnetic state of the atmosphere, a number of leeches ascended into the tubes; in doing so they displaced the whalebone and caused the bell to ring.” When several bells rang in succession, a storm was said to be prognosticated.

Merryweather intended his Tempest Prognosticator to be on display at the Crystal Palace at the Great Exhibition of 1851, so he designed it in the form of an Indian Temple, adding a few Egyptian motifs to echo the supposed origins of the Palace itself. 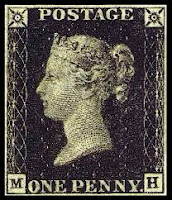 He had tested his invention throughout 1850 by posting a letter to Henry Belcher, the President of the Whitby Literary and Philosophical Society, as soon as a storm was predicted on his Prognosticator.

As, at the time, there were multiple postal deliveries daily, each letter was postmarked with both the date and time before any "prognosticated" storm arrived, thus proving the reliability of his invention. (And maybe the reliability of Roland Hill's postal service, begun that year? )

As Dr Merryweather had anticipated that the Prognosticator would be widely used on ships, he designed six different versions to suit differing pockets. However, his great invention failed, It was not taken up by captains or shipping companies. Sadly, even the original from the Great Exhibition was reported as lost.

In 1951, a copy was made for the Festival of Britain and this is the model on display in Whitby Museum, but unfortunately, as the circular bell was made from cardboard, it is not even a working, musical model nor are the leeches real. Oh dear . . . Faced with this unhappy tale and the impressive Leech-Powered Prognosticator, the mind boggles and the questions surface.

How impressive – and possibly annoying - was the dear doctor’s constant sending of letters? What did Belcher, or the other members of the Lit &Phil think of Museum Curator Merryweather? Or his invention? Does it feature in the annals of the Society? Did Dr Merryweather talk about his plans for his leeches while he was visiting patients? Were they the same leeches? Moreover, how long does a leech or twelve leeches live, on land or on sea? Who, on board any ship, would have been the leech-carer: the doctor or the cabin boy? (Even for ordinary doctoring?) Moreover, did Merryweather’s prototypes look too cumbersome or too fragile for use on board a ship? Is “tempest atmosphere” the same the world over? Or did ordinary seaweed and experienced observation prove far less trouble?

And was the unsuitability of “leech energy” what stopped the Prognosticator being a success with the crowds and reporters in the Great Exhibition of 1851? Or was his invention considered unlikely to amuse Queen Victoria and therefore ignored? And how did poor Merryweather cope with the obliteration of his ornate dream and his grand, lost Prognosticator?

Dear Dr Merryweather, even with this one exhibit, one could go on and on . . .

Loved this, Penny. 'The Tempest Prognosticator of Dr Merryweather' - it's irresistable. Was it a case of a decisive surname?

Yes, I wondered that too, Sue!

That is an excellent oddity indeed - worthy of being part of a book if not a book of its own! Thank you - and I look forward to more that is weird and wonderful from Whitby!

That is an excellent oddity indeed - worthy of being part of a book if not a book of its own! Thank you - and I look forward to more that is weird and wonderful from Whitby!

Lovely blog! Does anyone else remember the leech in Nancy Mitford's The Pursuit of Love? When she went to the South of France to help with refugees. And there was a leech in a chemist's window that was in a bottle, and it it rose it would be nice weather, and if it sank in the bottle it would be bad? Clearly this was a related method to your man's. Must go to the museum if I'm ever again in Whitby - missed it last time!