ETHEL WHO? by Eleanor Updale

Last month, I was inspired by an old magazine to write about aluminium knickers.

I warned you then that the publication might prove to be a treasure trove for History Girls posts.  So here's something else from the June 1945 edition of Everybody's.

The magazine carried a full-page review of the premiere of Benjamin Britten's opera Peter Grimes at Sadlers Wells. 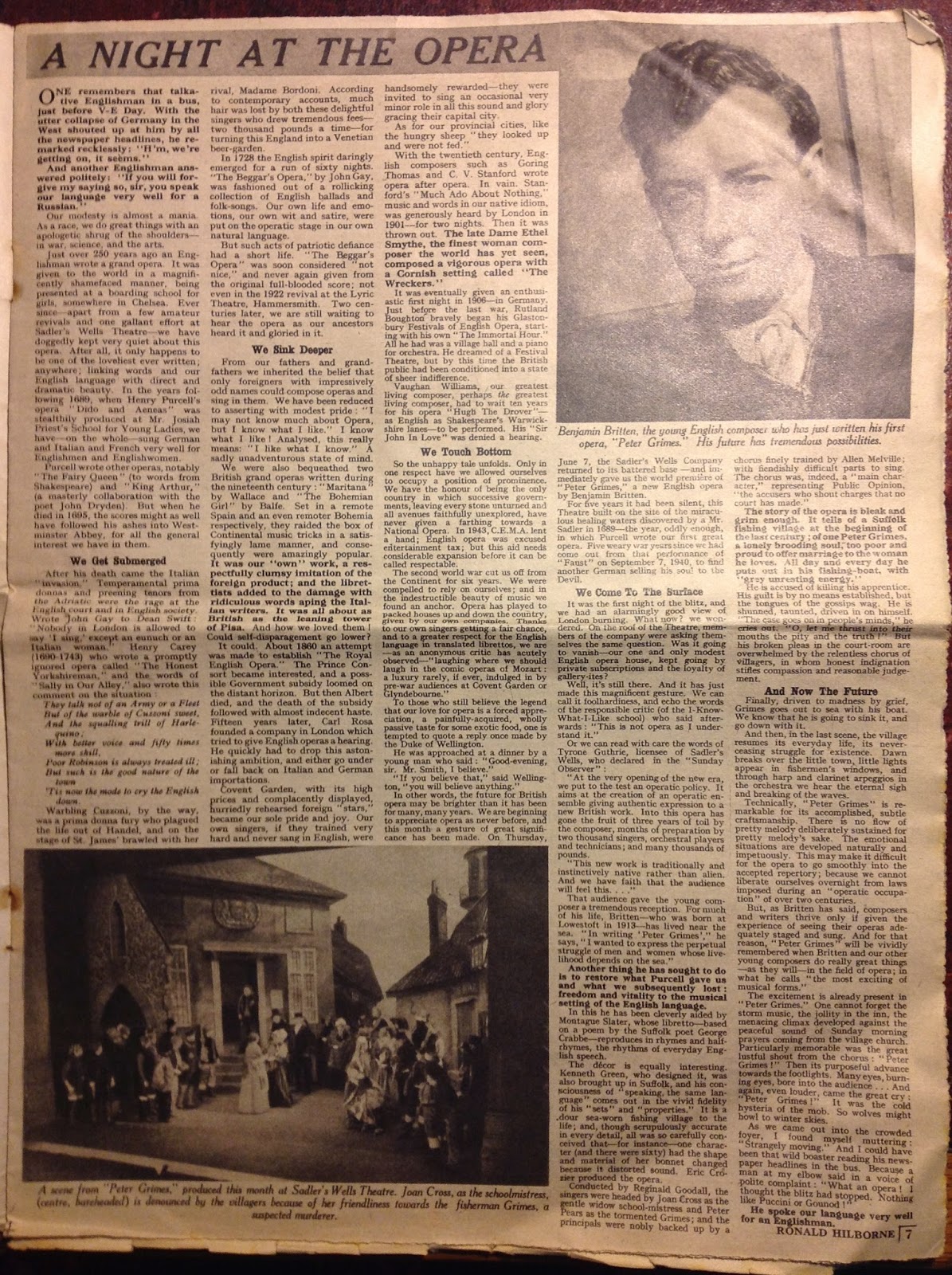 The article, though wildly enthusiastic about Britten's achievement, was in part a lament for the state of British music, and the failure of this country to appreciate its native talent.  The reviewer, Ronald Hilborne, put it like this:

With the twentieth century, English composers such as Goring Thomas and CV Stanford wrote opera after opera.  In vain.  Stanford’s “Much Ado About Nothing," music and words in our native idiom, was generously heard by London in 1901 - for two nights.  Then it was thrown out.  The late Dame Ethel Smythe, the finest woman composer the world has yet seen, composed a vigorous opera with a Cornish setting called “The Wreckers” It was eventually give an enthusiastic first night in 1906 - in Germany.

The bold type is the magazine's own.  Hilborne could not have been more enthusiastic about Dame Ethel.  I wondered why (as I thought) I had never heard a note of her music.
It didn't take long to find a performance of the overture to The Wreckers on YouTube.  It's wonderfully stirring stuff.  You can find it here.
https://www.youtube.com/watch?v=maozbZsiK0c
And there is a recording of the entire opera, although it doesn't seem to have originated in a stage performance. 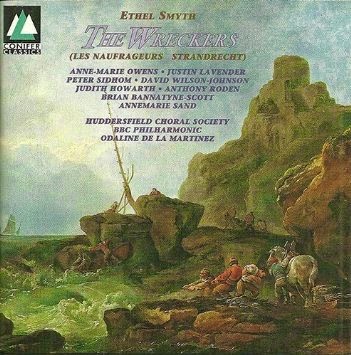 The opera didn't receive its American Premier until 2007, more than a hundred years after it was written.
The story of The Wreckers is perfect for the new Poldark generation: salt of the earth starving Cornish-folk scavenge on wrecks for survival, and a love affair comes to a watery end.  It's no more far-fetched than European operas that are performed all the time.  Why has it been confined to near-oblivion?
The same question might be asked of Smyth's moving Mass in D, and many of her chamber works (which can also be tracked down on the internet).
But who was Ethel Smyth?


Well, she was born in 1848, and died in 1944.  After battling against her parents to be allowed to study music, she learned composition in Leipzig.  She knew Schumann, Brahms and Tchaikovsky, and was romantically involved with various well-known men and women of her era.  But she lived in suburban Surrey, near Woking.  Perhaps that explains the dismissiveness of the British artistic community about her work.
Smyth was not only a prolific composer. She wrote several books, and she was a leading campaigner for women's suffrage.  In 1910, she wrote to Mrs Pankhurst, lamenting her previous ignorance of the cause, and offering to do whatever she could to support it. 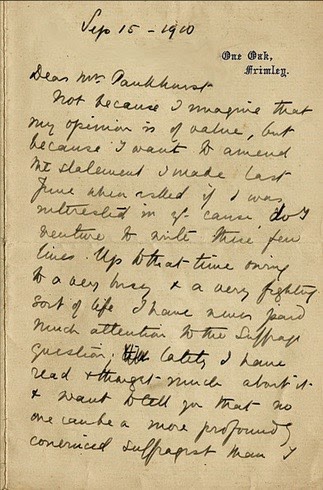 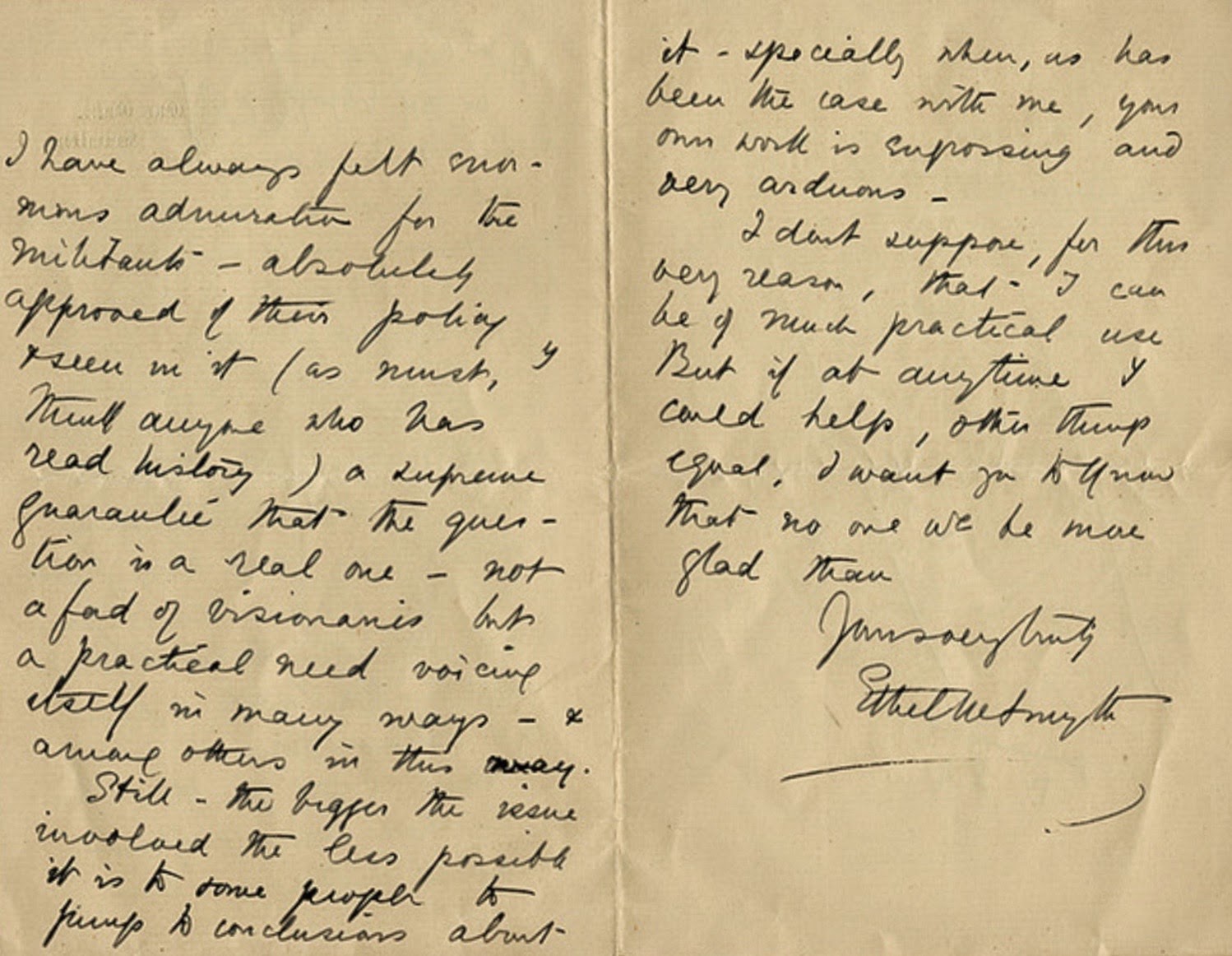 As well as taking direct action, Smyth donated her musical talent to the cause.  And it is in this context that I found I had, after all, known one of her works for many years.
Ethel Smyth wrote the famous March of the Women, which you can hear on YouTube, here:
https://www.youtube.com/watch?v=65NuypEkg-4 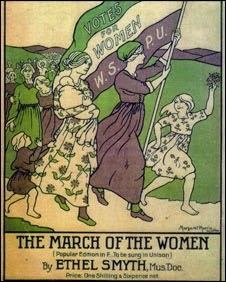 Shout, shout, up with your song!
Cry with the wind for the dawn is breaking.
March, march, swing you along,
Wide blows our banner and hope is waking.
Song with its story, dreams with their glory,
Lo! They call and glad is their word.
Forward! Hark how it swells
Thunder of freedom, the voice of the Lord.

The anthem was first heard at a rally in the Royal Albert Hall in 1911.
Years later, Smyth gave her own account of the event:
In those early days of my association with the W.S.P.U. occurred an event which, in her pride, the writer must recount ere the pace becomes such that a personal reference would be unthinkable, namely the formal introduction to the Suffragettes of ‘The March of the Women’, to which Cicely Hamilton fitted the words after the tune had been written – not an easy undertaking. A suffragette choir had been sternly drilled, and I remember Edith Craig plaintively commenting on the difficulty of hitting a certain E flat. But it was maintained that the interval is a peculiarly English one (which is true) and must be coped with. We had the organ, and I think a cornet to blast forth the tune (a system much to be recommended on such occasions), and it was wonderful processing up the centre aisle of the Albert Hall in Mus. Doc. robes at Mrs Pankhurst’s side, and being presented with a beautiful baton, encircled by a golden collar with the date , 23rd March 1911.

It is said that in 1912, an impromptu performance of The March of the Women was conducted by Smyth from the window of her cell in Holloway Prison, using her toothbrush as a baton.
By 1922, she was no longer considered a risk to society, and she was made a Dame. In her last years, she became deaf, and stopped composing.  By the end of the Second World War, she was dead and, if the article in Everybody's is a guide, already on her way to being forgotten by the musical establishment.
Maybe some opera house, perhaps inspired by the popularity of Poldark, will put on a full production of The Wreckers, and give her back her place in Britain's musical history.

Email ThisBlogThis!Share to TwitterShare to FacebookShare to Pinterest
Labels: Dame Ethel Smyth, Eleanor Updale, March of the Women, The Wreckers

What an interesting person! Will listen to some of the music later - thanks, Eleanor. That magazine is quite a treasure trove.

That Sargent portrait of her is wonderful! Like Sue, I'll be pursuing her music later - thanks for flagging her up!

Glasgow Women's Library staged a March of Women this March, based on Cicely Hamilton's Pageant (but without Ethel's anthem). There will be a film about it later in the year.
http://womenslibrary.org.uk/discover-our-projects/march-of-women/

What a very enjoyable blog. I love her conducting the march from her prison cell, using her toothbrush as a baton! Very filmic I think... thank you for helping us to remember the rather marvellous Ethel Smyth!

What a very enjoyable blog. I love her conducting the march from her prison cell, using her toothbrush as a baton! Very filmic I think... thank you for helping us to remember the rather marvellous Ethel Smyth!