'Know The Meaning By The Mumping' by Karen Maitland 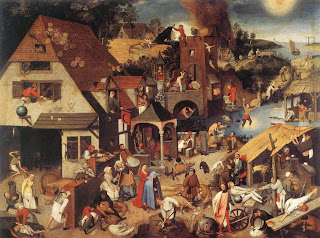 Research for novels takes you into some odd nooks and crannies of history as you try to uncover all kinds of details from what type of false-teeth were in use in that century, to the shape and flavour of a medieval cabbage. But it is only too easy to become distracted when you are researching one simple fact and find hours are slipping by as other tempting snippets catch your eye. You sternly remind yourself you do not need to know that at this moment, but find you can’t tear yourself away.

One such distraction popped up this month when I was trying to find out when a particular proverb came into use and found myself captivated by other old proverbs I stumbled upon.

We still use Love me, love my dog which St Bernard is said to have coined in one of his sermons in 1153. But sadly we have lost the 15th century - Love of lads and fire of chats (wood chips) is soon in and soon out. Although many today might still recognise the truth of that one.

Every herring must hang by its own gill, was the 16th century way of saying Everyone must stand on their own two feet. Then there was the sound advice - Calves should not play with oxen since the ox have bigger horns or A cat in gloves catches no mice or He who has a snake by the tail does not have it under control. And the 16th Century - It is good to have friends both in heaven and hell – must certainly have rung true in that turbulent century.

Proverbs are often very revealing about the period in which they were in common use. We often believe that in former times men had the upper hand in marriage, but old proverbs suggest that wasn’t necessarily the case. He that would thrive must ask leave of his wife (1470). Husbands are in heaven whose wives chide not (1549). He that has a wife has a master. (1721) And the 17th century proverb - A good lawyer must be a great liar - reveals much about the attitude towards the legal profession at the time.

The proverb may change a little, but the sentiment doesn’t. Today we refer to the Pot calling the kettle black, but in the 16th century they said the Kiln called the oven burnt tail. We say Pissing into the wind, but it used to be Pissing against the moon. And while we would say Don't look a gift horse in the mouth. In the Middle Ages they would remind each other  So long as the milk is given to you, why should you itch to know which cow it came from?

But maybe in this internet age we should end on a wise proverb from 16th century - A good word costs no more than a bad one.

The illustrations in this piece are all taken from 16th century paintings by both Pieter Brueghel the Elder and Younger who illustrated the proverbs in their literally sense to show the foolishness of people. Many of these proverbs were also current in English at that time.
Posted by Karen Maitland at 00:30

Fasecinating article Karen. I wonder if the 'merry as a pie' refers to a magpie?

That's a very large bell for a relatively small cat! But I don't suppose there was a mediaeval Cats' Protection League or so many of them wouldn't have been burnt for witchcraft.

Old Venetian proverbs are funny too, and frequently misogynistic

ie The Bread of the Master has Three Crusts.

Women have two pockets - one for lies and one for tears.

If there was no wind, and no crazy women, there would be no be weather, or bad days.

Women with long hair can go either way.

Yes, I too thought the pie must be a magpie - though the magpies that keep yammering on in our garden never send very merry.

I like the crab in a cows mouth, crab apples being small and tasty, they could be sort after ad then macerated to a pulp! crunched and mushed :-) cows tend to mull over their food too so you could even said crunched and mushed several times :-) not a good thing to be happening to you :-D. Mind you any crab apples I get end up as jelly!

I love these! Thanks for posting.