Every History Girl posts on an allotted date. Mine is the 18th. I have to admit to having sometimes suffered from Date Envy. Other days are Special. New Year's Day, Christmas Day, Valentine's, Solstice, Equinoxes, the year is studded with Special Days. The 18th? Not very special at all. Nothing much to say. Except this day in this month of this year. 18th June, 2015 will mark the Bicentenary of the Battle of Waterloo. Commemorations have already started with the unveiling of a plaque at Waterloo Station. 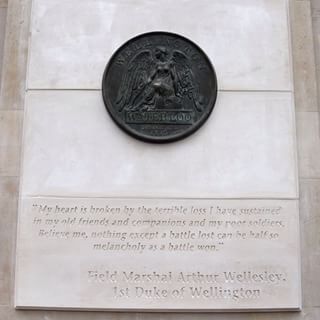 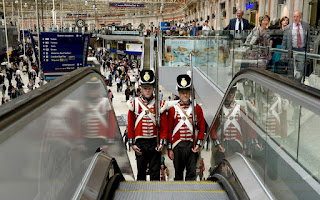 There are plans afoot for a various events to take place on the site of the battlefield itself including, perhaps, a re-enactment of the charge of the Scots Greys immortalised in the painting Scotland Forever! by Lady Elizabeth Butler. I'd like to see that.

The Battle of Waterloo brought to an end a war that had been going on for twenty years, a war begun in furious reaction to events in France. Initially, Austria, Prussia and Great Britain set out to crush the Revolution that so terrified them. They were joined by Russia, the Ottoman Empire, Portugal, the Papal States and sundry other nations but the French refused to be crushed. They defended their new state based on Liberté, Egalité, Fraternité. The Levée en masse, the mobilisation of the population, an army officer corps made up of youthful career soldiers under the ruthless leadership of a brilliant young Corsican enabled them to turn the tables on the formidable forces ranged against them.


The French Revolutionary War turned into the Napoleonic Wars with armies ranging back and forth over the map of Europe. Such total war affected all the nations involved. In Britain, every city, every town, every village and hamlet was touched as more and more men were sucked away into the army and the navy. Even Jane Austen, not one for the bigger picture, has plenty of young officers to distract her more impressionable female characters, while the army and navy provided a convenient conduit for younger sons and impecunious brothers. In the first part of Thackeray's novel, Vanity Fair, most of the male characters are in the army and one of the great pivotal scenes is the ball before Waterloo.

The war affected families from the highest to the lowest. There are many songs and ballads that vividly attest to the deep and far reaching effects of this long running war. The Eighteenth of June graphically describes the carnage of its final battle with generals and common soldiers lying equal in death.


The valiant Duke of Brunswick fell in the field that day,
And many a gallant officer fell in the awful fray.
And many a British soldier lay wounded in their gore,
Upon the plains of Waterloo where the thundering cannons roar.

The Eighteenth of June

Ballads like The Plains of Waterloo tell piercingly poignant stories of the love and loss suffered by the women, the soldiers' sweethearts and wives, who were left behind.

"Farewell my comrades, likewise my sweetheart."
These were the very words he said and then he did depart.
They dug my love a silent grave, the tears they were not few.
And they laid him in the cold clay on the Plains of Waterloo.
Although he's gone and left me no other will I take.
Through lonesome woods and shady groves I wander for his sake.
Through lonesome woods and shady groves I'll wander through and through,
And I'll mourn for him that's dead upon the Plains of Waterloo.

Waterloo might seem distant to us now but the forthcoming commemorations are a reminder of a war that reached into almost every household, that changed forever the nature of warfare itself, introduced the idea of 'total war' and made possible, if not probable, the kind of European war that had its centenary last year.

"They dug my love a silent grave" - a poignant line. Thanks for this interesting post - and I love the photo of the redcoats on the escalator!

Great, love the poetry and that escalator shot!

Very helpful to have this context for the Battle of Waterloo. I remember doing masses about Napoleon at school (before I dropped history at the end of Year 9/the third year), alongside masses about the Agrarian and Industrial Revolutions - as a result of which all three of them are tainted with a remembered sensation of almost painful boredom! (This is not meant as a general comment on history teaching, either then or now - it's just how it was in my school.) Time to have another look, perhaps.

I know! Great image, isn't it? I felt much the same way,, Sue, but it's always worth another look. V good TV series on about Napoleon at the moment. Worth viewing.

When you said a plaque was unveiled at Waterloo Station, I had a complete brain blowout and wondered why on earth they'd put a plaque in English in the tiny, damp rural stop that is the original "Gare de Waterloo". I lived in that Belgian suburb for several years and walked to the 175th anniversary re-enactment of the battle--could it really have been 25 years ago? It remains the best re-enactment I've ever seen, with cavalry charges and so much smoke you could barely see the battle at one point--very realistic.

On a clear day I could see the Lion Mound from my upstairs windows. It's good to see that the battle is being commemorated in so many ways, and I've read that they're giving the tourist site a much-needed overhaul. Oh yes, and I remembered there's a slightly larger Waterloo Station in London.

Hope to visit the battlefield some time, Jane and will look out for the plaque next time at the bigger station.

Fascinating blog. I am not a fan of Napoleon, and think it tragic that the outcome of his campaigns was to set back all the achievements of the Revolution - indeed, the Code Napoleon did that initially, but it was surely thanks to him that the Bourbons returned to Paris, and it took years more of struggle and blood to get a Republic again. The fact that Nap 1sts direct legacy was the disastrous Napoleon the Third tells its own tale. To me, Waterloo is a telling example of the pity of war, and as you justly point out, it was Napoleon's introduction of universal conscription that made it possible for him to waste his men's lives in a way no previous generals could afford to.
I think Wellington was horrified by the casualty figures, wasn't he?