Like Lydia Syson's previous books, A World Between Us and That Burning Summer, this novel has as its subject love in a time of conflict. The first was set in the Spanish Civil War - about which probably most of us know a little, but not very much. The second was set in WW2 - but in a seldom-explored corner of it: it deals with conscientious objectors. (We know a good deal about the fate of conscientious objectors in the First World War, but we hear far less about them in the second one - perhaps because we have come to see the first conflict as a largely shambolic bloodbath, whereas the second is broadly seen as a 'just war'.)

Liberty's Fire is set during the Paris Uprising of 1871, when the workers, starving and desperate after being besieged by the Prussians, declared that the people would govern the city through a Commune. It's a time about which I knew virtually nothing: after reading the book, I know a great deal more! 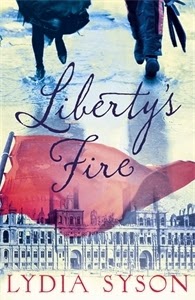 However, Lydia Syson is far too skilled a writer to overload the book with historical context. In the foreground of the novel are four vivid and appealing characters, and it is the stories of their relationships and the shifts they have to make to survive the turbulent times that drive the novel forward.

Anatole is a young violinist. I'm not sure that we're ever given a physical description of him, but it becomes clear that he is very attractive, in his personality as well as in his appearance. He has tremendous joie de vivre, and he's the kind of person whose charm and enthusiasm make him a magnet for other people. He is vaguely aware of this, but almost entirely guileless; impulsive, warm, generous - but perhaps a little careless about the effect he has on others. This is particularly so in the case of Jules, a young, well-to-do American with whom Anatole shares an apartment. Jules is a photographer, which means among other things that he is invited to be present at some of the significant events of the uprising - he is a witness. It quickly becomes clear to the reader that Jules is in love with Anatole. What's less clear is how aware Anatole is of this. He seems to have some sense of it, but chooses not to explore too deeply what Jules' feelings are for him; perhaps it's more convenient for him that way. Jules is a marvellous character, very subtly drawn.

The Commune has thrown out the normal conventions of social intercourse, and so when Anatole meets a working-class girl called Zephyrine, he is able to get to know her. They fall in love. Zephyrine is gripped by the ideology of the communards, by the idea of freedom and justice for all, and Anatole is swept along by her enthusiasm - only for both of them to see that neither side has a monopoly on cruelty and injustice. The fourth member of the quartet is Marie, a singer and friend of Anatole. She is ambitious, and she sees that the Commune may give her unexpected opportunities. But her brother is a soldier with the Nationalist (opposing) forces; as far as she knows he's a prisoner of war. She is desperate to help him, but she finds that her attempts to do so lead her into murky moral territory.

So the scene is set for conflicts of all kinds. Lydia Syson writes about all of them with skill, but it's her descriptions of the fighting which, as a writer, particularly impress me. I've written about battle scenes, and it's not easy; unless you can find good first-person accounts, how can you really imagine what it was like to be under a particular kind of fire? Well, Syson makes an utterly convincing job of it. Here, she writes of an explosion at a cartridge factory:

...the cloud had a capricious, uncapturable beauty: innumerable silvery ostrich plumes, continually unfurling, whirling, twisting in the air, revolving round themselves and others, endlessly and speedily rolling in and out of one another...And from the sky fell burning timber, molten lead, empty bullet cases and human remains.

The Commune only lasted a few short months, and the communards were ferociously punished. The issues are complex, but Syson handles them adeptly. And as we see how this movement by the people and for the people starts with passionate idealism, but becomes mired in the politics of necessity, perhaps we may reflect with perplexity on how the same story continues to be told - over, and over, and over again.

The book is marketed at young adults, but as is so often the case, I think it's also entirely suitable for 'old' adults!

PS This review previously appeared on my own blog, A Fool On A Hill.

My eldest daughter has loved both of Lydia Syson's previous books and I mean to pinch them when I get a chance. I know a little of this subject because Karl Marx's eldest daughters were both married to former Communards - it was a fascinating, tragic moment. Can't wait to get a copy!

Writing fighting scenes is a real skill - thanks for this review - I'll look out for it.