A Word I Don't Have by Joan Lennon

English is a rich and wonderful resource, but it has gaps that other languages have managed to fill.  Words for things we feel but haven't a term for.  Like akihi in Hawaiian, which means that thing where you listen to a string of directions, walk away, and promptly forget the lot.  Or arigata-meiwaku in Japanese, for that feeling of having to be grateful for something someone has done for you that you really didn't want them to do in the first place.  Or l'esprit de l'escalier in French, for that clever repartee that comes to you when it's too late to deliver it.

The word I don't have is maybe a bit specialized, but if it existed it would express something that writers of historical fiction - and non-fiction - feel.  Deeply.  Viscerally, even.

It's a word to describe that stomach-tightening, hand-dampening, shallow-breath-inducing feeling that we are overwhelmed by when a new programme comes on TV, or a new article appears on the internet, or a new tome is published, on the topic of the book we've just written.  The book where the plot is dependent on a particular understanding of historical events - where the characters have formed themselves around and out of that understanding. The book we've put time and effort and thought and care and tons of research into, and now it's too late to make any changes.

I suspect that out there, in some language or other, there may very well be a term - a word that says, "please, please - I want to go on learning - just don't tell me anything that will blow my book out of the water * - please, please, please ..."   If you know the feeling, let me know.  If you know a term or phrase that English, the great word-grabber, can acquire from some other language, to express this particular discomfort, let me know that too! 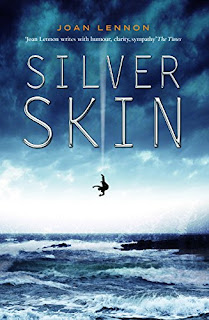 Joan Lennon's YA debut novel Silver Skin is being published by BC, Birlinn Polygon's new imprint, on 16 June 2015.  She continues to watch, listen, read and learn about the late Stone Age but, metaphorically, from behind the sofa.

* So far, it hasn't happened.  At the end of Silver Skin, I included this Note to Readers:
So much of what we think we know about the time when the Stone Age was bleeding into the Bronze Age is based on bewildering artefacts and guesswork.  What we do know, however, is that during this time, the climate worsened.  There are many scientific, anthropological, archaeological theories about the effect climate change might have had on the civilisation of Orkney, and I have cherry-picked indiscriminately among them.  This story is just that – a story.  It is driven by the interactions of fictional characters in a setting that has sparked my own imagination for years.  I have researched and visited museums and sites and taken photographs and talked and listened, but if you are looking in the result for a historical document, you will be disappointed.
Maybe I should have put it at the front!

However did you find those phrases, Joan? Love them!

Akihi and arigata-meiwaku are new to me but - as you say - what they express certainly isn't. And I can't think of a word for what you mean, but again, I know the feeling so very well. (Two new books on the Paris Commune came out between finishing and publication of 'Liberty's Fire'…luckily both complemented rather than conflicted with anything I'd writhed.) Crossing fingers madly for 'Silver Skin'. Beautiful cover.

It is a great cover, isn't it? Great title too - even more so when you start reading the book. I'm reading it now, and loving it.

So pleased to have discovered this blog! Great read and I now have some new phrases to try out badly on friends (particularly the Japanese one)!