'When April with his sweet showers has penetrated the drought of March to the root, and bathed every vein in the moisture whose virtue brings out the flower; when, too, Zephyr has breathed his sweetness on the new crops, encouraging them to spring up in every holt and heath, and the young sun has completed half his journey through Aries, and, spurred on by nature, small singing birds barely shut their eyes all night - that's when people long to go on pilgrimages [...] and to seek foreign shores and far-off shrines...'

What would a set of Canterbury Tales for our time be like?

Something exciting is happening this month, and if you feel like joining in you can, literally, be part of it.  Between June the 13th and 21st, a group of walkers will set out from Dover and make their way for nine days along the North Downs, taking the old Pilgrims' Way via Canterbury. While walking, they will be 'reflecting on the long and dangerous journeys that many refugees make fleeing war and persecution, seeking a safe place to live.' Organised by GDWG - Gatwick Detainees Welfare Group - the walk will be a thought-provoking, inspiring experience, but it is also intended to be fun - just as Chaucer's Canterbury pilgrims combined the serious purpose of visiting the tomb of Thomas the Martyr, with fun, jokes and jollity along the way. The walkers will finish up in Crawley on June 21st.

I learned about this walk from a good friend, Christina, who has been a volunteer at GDWG for several years.  This is how she describes the route:

"The North Downs Way is outstanding. It is very varied and there is some spectacular scenery. I especially enjoy the stretches where the walk goes along ancient trackways which feel like green tunnels. It is amazing to think that some of these tracks have been used for thousands of years.

"The two cities that we have free time to explore – Canterbury and Rochester – are full of history and interest. We are going to be staying in some of the prettiest villages in the South East, many of which have a wealth of Tudor and Jacobean houses. It is going to be good taking our events and our message out to local people.

"Wildlife, wildflower and landscape guides will be walking with us. These guides will add an interesting extra dimension to the walk. One of the best things about walking is being in touch with nature and I find that knowing more about wildlife and landscape really helps my appreciation. I am very much looking forward to getting to know all the other walkers. Walking and talking is so good."

But it's more than just a walk. Every evening, two wonderful stories will be told - stories which will honour and shed light upon the experiences of those who have come to seek refuge on our shores.  Fifteen contemporary writers and poets (including Ali Smith, Chris Cleave, Marina Lewycka, Abdulrazak Gurnah and more) have been collaborating with refugees and ex-detainees to tell, among other tales: The Migrant’s Tale, The Unaccompanied Minor’s Tale, The Arriver’s Tale, The Lorry Driver’s Tale, The Detainee’s Tale, The Interpreter’s Tale, The Appellant’s Tale, The Deportee’s Tale, The Lawyer’s Tale, The Refugee’s Tale and The Detainee’s Tale. It won't all be dark.  There'll be star-gazing one night, there'll be a talk by a landscape archeologist. There'll be comedy as well as tragedy. "Featuring film-screenings, plays, talks and music, the whole event will form a political carnival, a reclaiming of the landscape in the name of human solidarity."

The tales will be also accompanied by talks and lectures. Iain Sinclair will address the assembled walkers on the philosophy of Walking.  Poet and historian Steven Collis will discuss the Commons, and Common Ground. Sue Clayton’s crucial film, ‘Hamedullah: The Road Home’ will be screened in Rochester. At every point words will be joined by music as singer-songwriters and collectives perform songs and pieces commissioned for the events. Hosts will include the journalist Yasmin Alibhai-Brown and actress Niamh Cusack.

The whole point of the Refugee Tales is to celebrate our common humanity: so the walk is reaching out to communities along the way.  All the evening events, which will take place in village halls and community centres, will be free of charge and open to the public on a first-come, first-served basis, while storyteller and artist Kathryn Holt will visit local schools to run Refugee Tales inspired workshops.

Thirty-five core walkers have already enrolled to walk the entire route, but you can join the walk at any point and spend a day, a half day, or a few days on the journey.  There's still time! To find out everything about the walk, the stories and performances, and how to join in, just visit the Refugee Tales website: http://refugeetales.org/

I think Chaucer would approve. 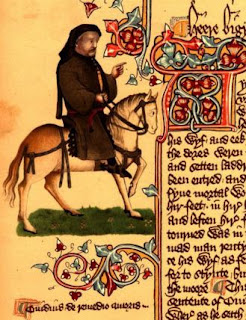 Sounds amazing. Will the stories be collected and printed afterwards for armchair enthusiasts?

Oh this sounds wonderful - what a brilliant idea! I'll be so jealous of anyone who manages to go! As Linda says, will there be a book afterwards?

Yes! I'm told there's going to be a book of all the stories, and a follow-up conference next year!

Sounds like fun. Will there be any sponsoring of the walkers to raise money for the cause? Wish I could come! Where is the Star Trek transporter when you need it?

What a terrific venture. I hope you'll report back in a future post!

Brilliant, like the others I wish I could join, and look forward to a bound set of tales to follow. Who knows yet how exactly they will be framed en route!

This is excellent - please tell us when the stories are available!