Hardknott and the Dalmatians - by Katherine Langrish

Over the heather the wet wind blows,
I've lice in my tunic and a cold in my nose.

The rain comes pattering out of the sky,
I'm a Wall soldier, I don't know why.

The mist creeps over the hard grey stone,
My girl's in Tungria; I sleep alone...

On holiday in the Lakes last year, we decided to take our car up and over first the Wrynose Pass and then the frankly terrifying Hardknott Pass, one of the two steepest roads in England - I mean, look at it - and stop at Hardknott Roman Fort, which is over the other side. 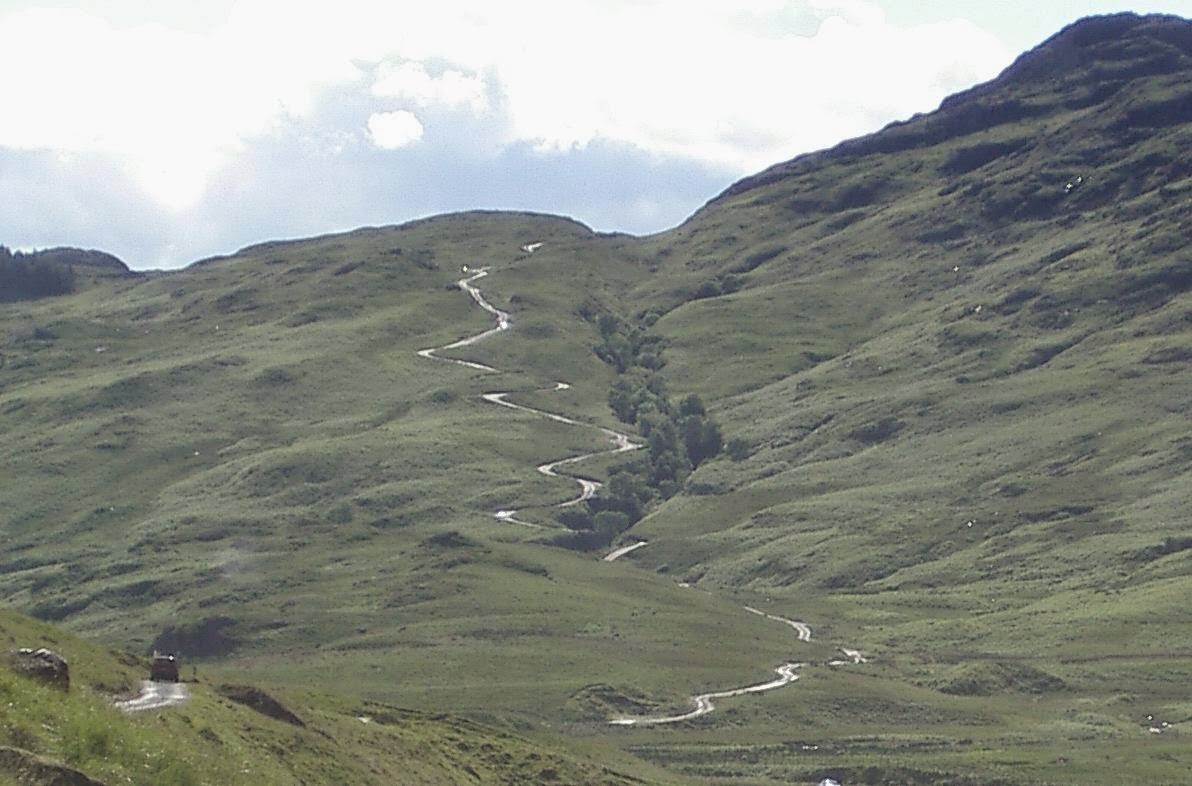 I was glad I wasn't driving. And I'm a Yorkshire girl who learned to drive on the steep and twisting roads of the Dales - but at least with those you've got nice solid drystone walls between you and any drop. This is nothing but hairpin bends, most of it single track, and nothing but rock and air on either side. And lonely... oh, so lonely!

Not even the Romans could have made a straight road up here.  There's every chance that, way back in the first century,  the cohort of unfortunate soldiers who had to construct and then live in the fort on the other side of the pass, trudged up this very series of bends. At last they had their feet on the ground. I shut my eyes for most of the journey. 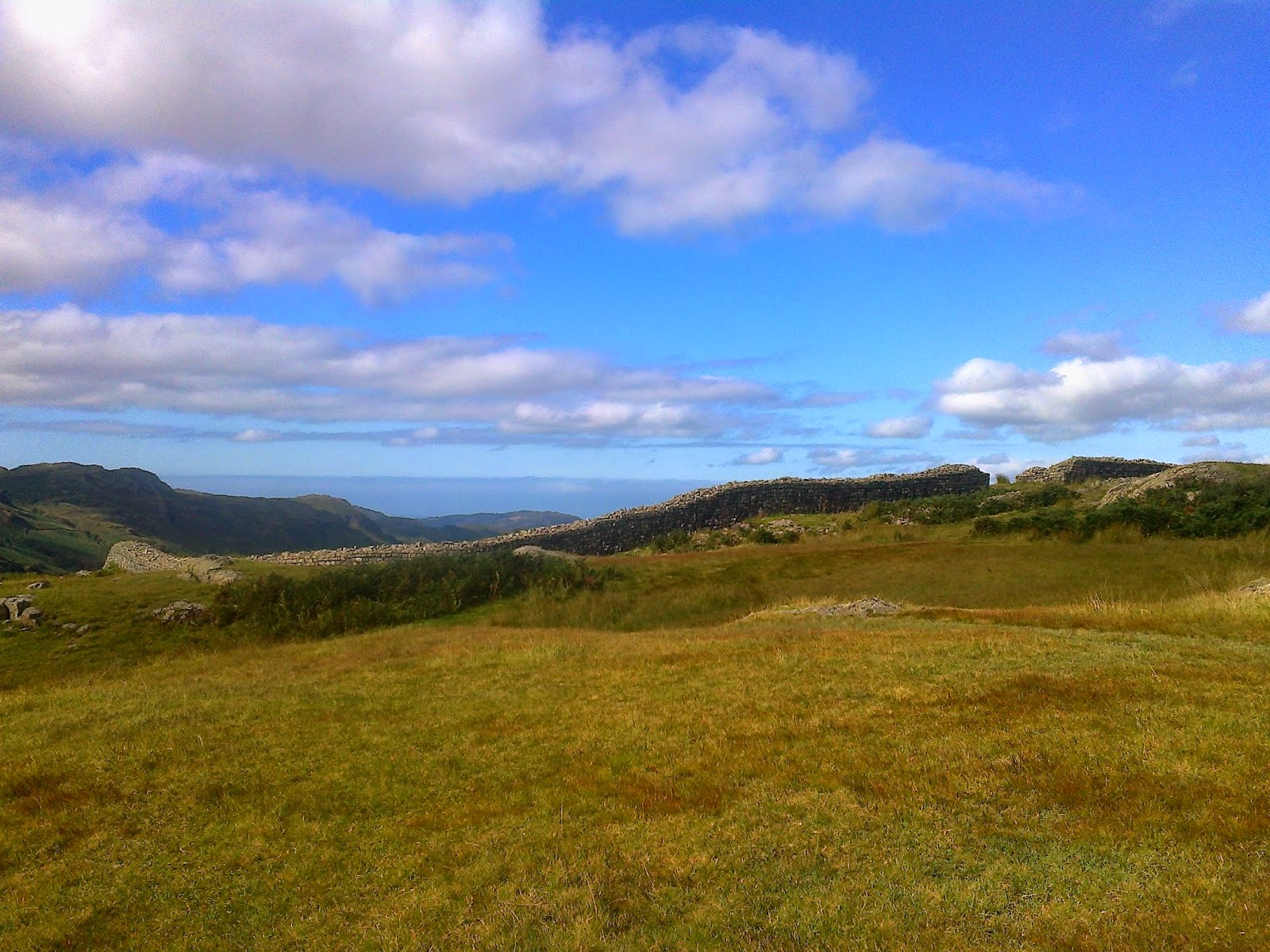 Diving down the other side it was a relief to spot the Roman fort below (you can see the walls snaking over the contours at the top of the picture above). We pulled over on to a narrow gravel shoulder and got out. Our dog jumped happily out of the back.

And we had brought her to the right spot. The fort was built in the early second century on a road (Roman or earlier) which runs all the way from the inland forts at Kendal and Ambleside and down Eskdale to the coast at Ravenglass, where there's another fort with a sumptuous bathhouse.  'Recalling [William] Camden's remark that there were some who thought the old bathhouse at Ravenglass to be the court of the legendary King Eveling, [RG] Collingwood expanded in his guidebook: "...people thought it was the Lyons Garde of the Arthurian romances... or they said it was the castle of King Eveling or Avaloc, the husband of the sea-fairy Morgan le Fay, who was king over the island where the blessed dead dwelt."'  Under Another Sky, Journeys In Roman Britain, by Charlotte Higgins, 2013.

The Roman name for the fort was Mediobogdum. It was built under the Emperor Hadrian and would have formed a base for troops patrolling the potentially hostile native population in the valleys and on the lower fells. It was abandoned during the Antonine advance into Scotland, but then re-occupied:  according to an inscription now preserved in the Tullie House Museum in Carlisle, the garrison here in the mid fourth century was a detachment of 500 cavalry of the 6th Cohort of Dalmatians from, of course, the Roman province of Dalmatia on the eastern Adriatic.

Fortunately we had a Dalmatian with us, and she wasted no time in exploring all over her ancestral home. 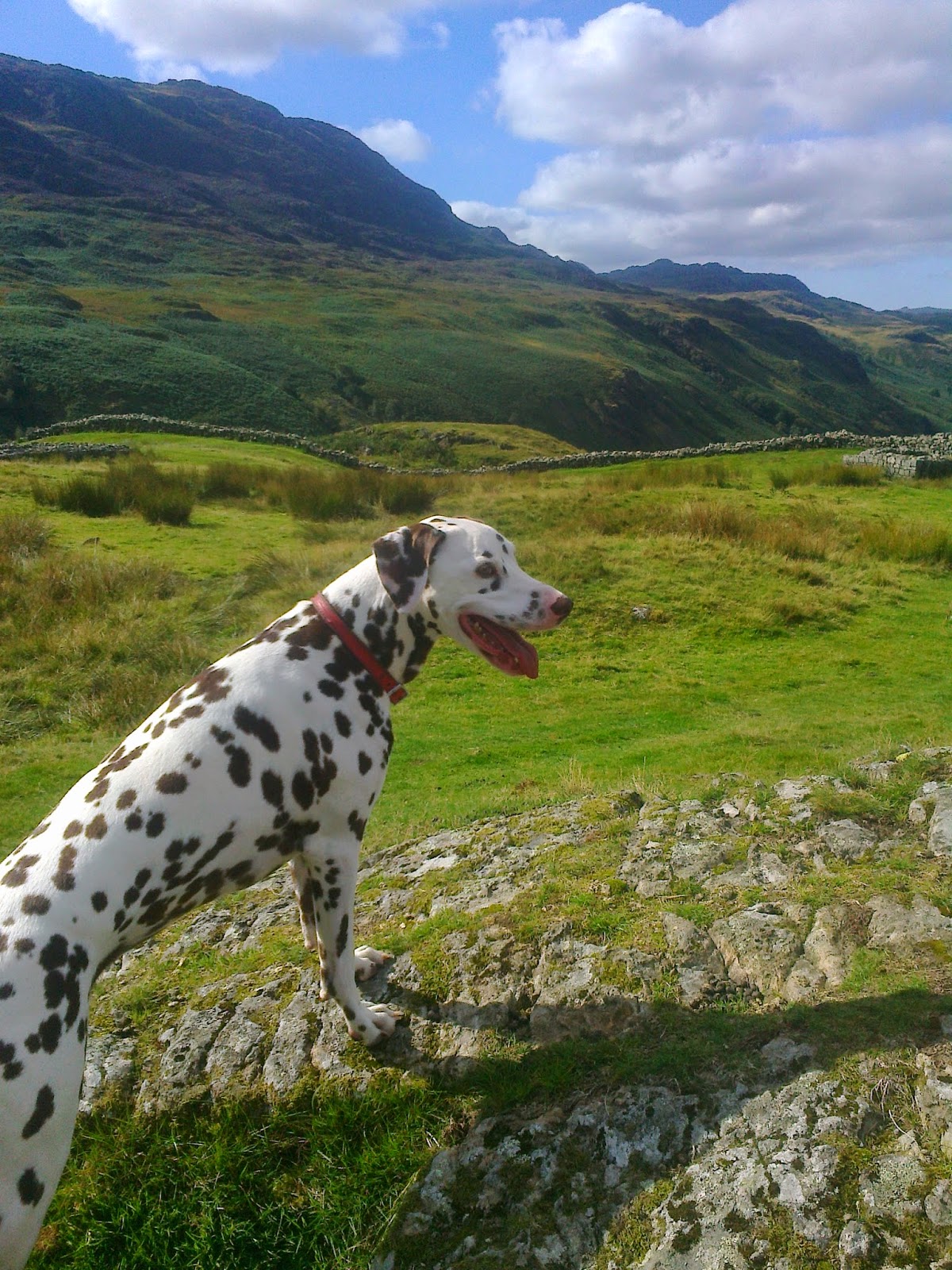 Here she goes, running past the beautifully preserved outer wall... 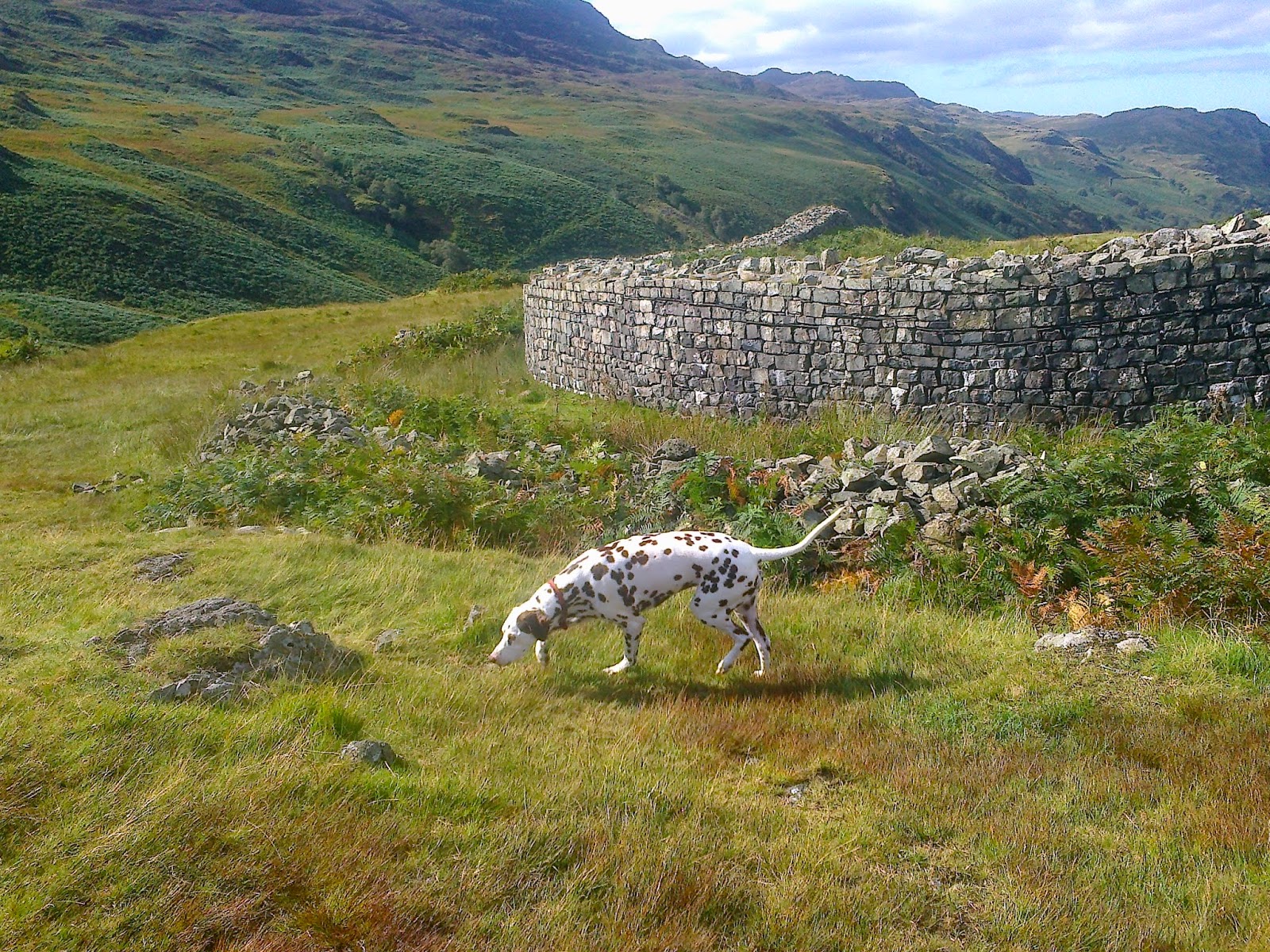 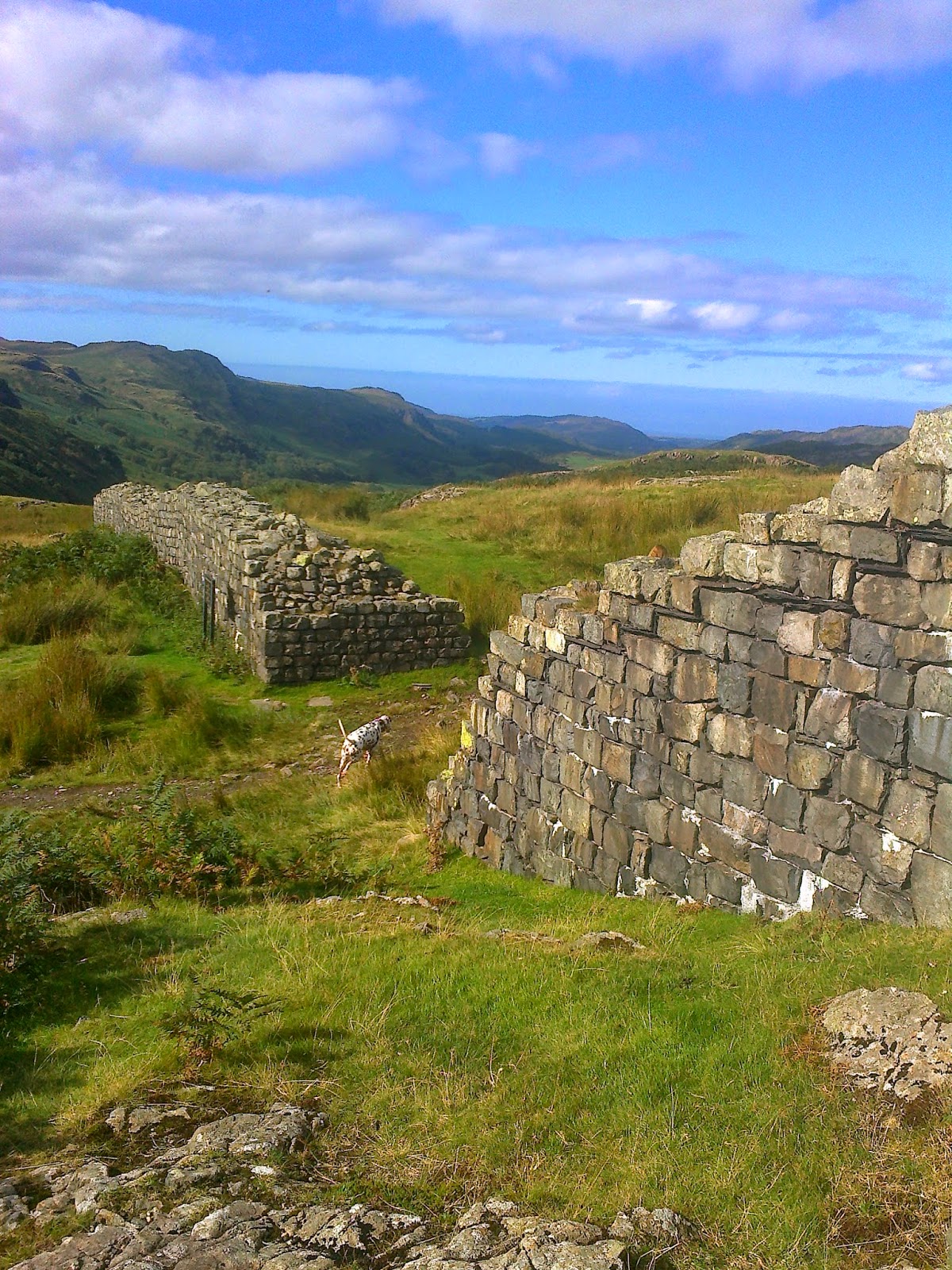 ... to explore inside the fort, where the outline of three buildings are still clearly visible above ground: a granary, a garrison headquarters building and a house for the commander. 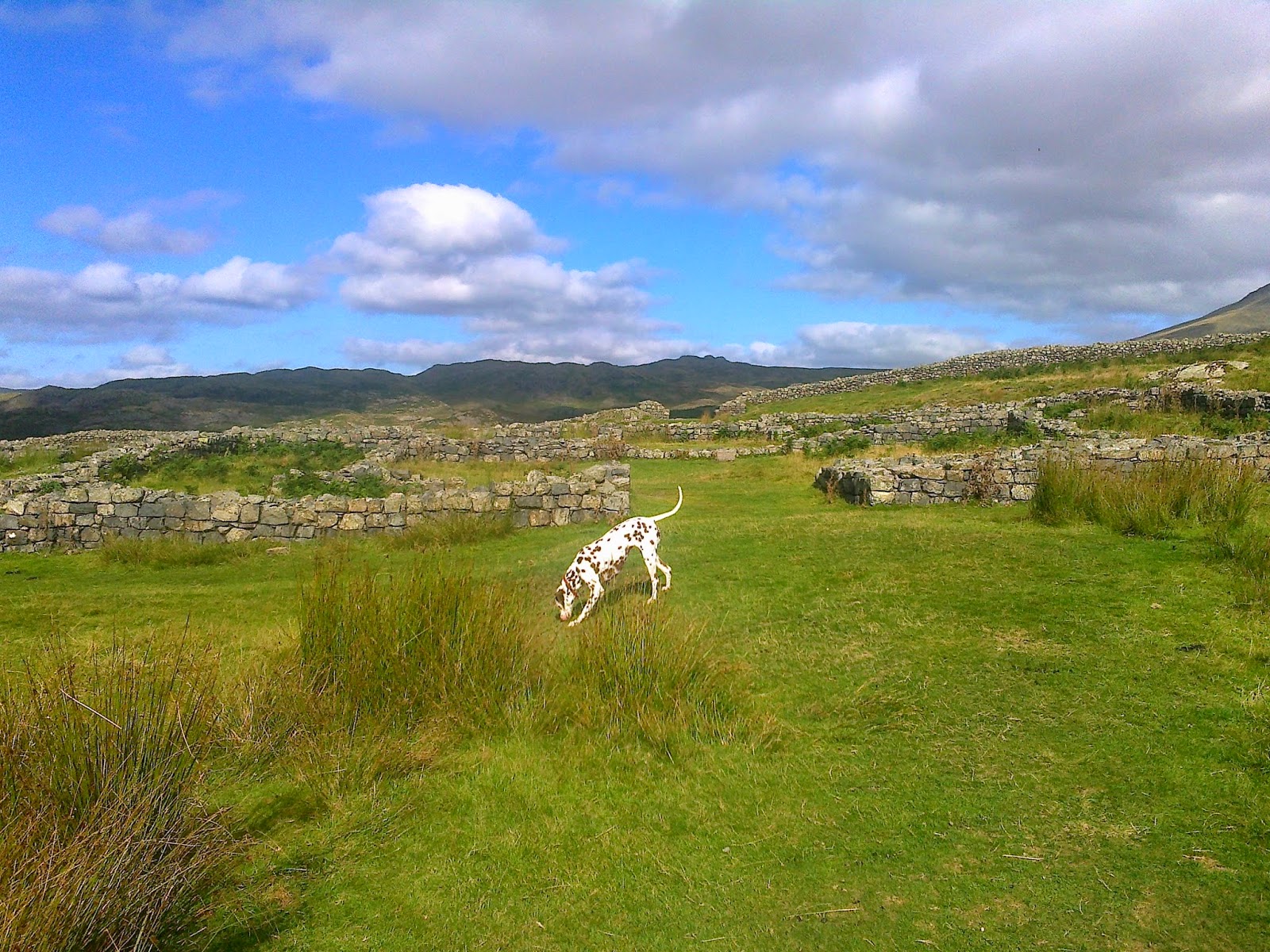 The fort has the most stunning views. It's at an altitude of 800 feet, perched on a rocky prominence above Eskdale.  This is the view from the rear of the fort, and my photo really hardly does justice to the precipitous drop. 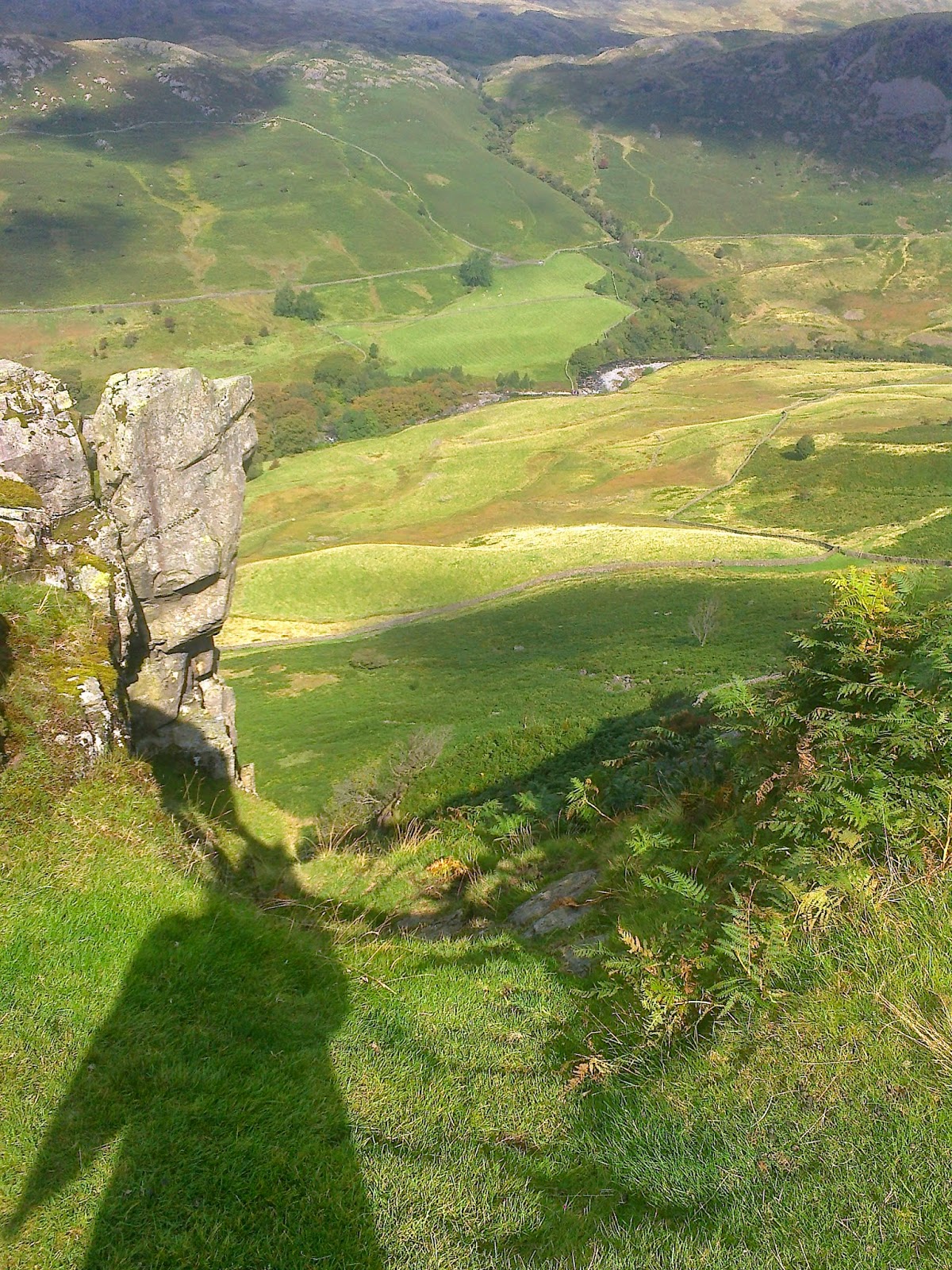 Did the soldiers of the Fourth Cohort of Dalmatians appreciate the view, though?  It's hard to imagine that they did. Unusually for a Roman fort, no trace of any vicus has ever been found around it; either the site was too remote or the population too unfriendly for a civilian village to spring up around the walls. It must have been a severe, lonely, isolated posting.There is supposed to be a rare example of a parade ground built higher up the slope, a levelled area enclosed with a raised bank; we went looking for it but honestly we couldn't find it. To my eyes the ground was either lumpy with rock and bracken, or else reedy, spongy turf running with water.  I couldn't imagine the soldiers having much fun carrying out their manouevres under the eye of their commander, with the wind taking their ears off and their hobnailed leather boots soaking up the wet. Incidentally, several preserved leather shoes or boots were discovered at this site at a dig in 1968.

It was probably a necessity rather than a luxury that this fort has a fine bath house with a vaulted circular sweatroom, a suditorium, in which the cold and clammy soldiers could bask in the only real heat for miles and miles. But I do I wonder if any of them ever got home to sunny Dalmatia?

All photos copyright Katherine Langrish except for the photo of Hardknott Pass, which is a personal photograph taken by Christopher Kennett on 18th June 2004, Wikimedia Commons

I was at Hardknott last week, and staying at an ancient farmhouse in Eskdale which has red sandstone (not local) adzed slabs over the cesspit outside. I suspect that you'd find lots of bits of the fort used in local buildings over the many many many years since the Romans left.

Lovely pictures. How the heart of a soldier from the south must have sunk when he heard he was being posted to Britain!

Hardknott. Now there's a place I'd like to vist. I'd be interested to find out if that road is more hair-raising than the ones on Mull and Ardamurchan.
Wonderful photos.

What beautiful pictures, Kath! Wow, they make me long to jump in the car and head up there. Love your beautiful Dalmatian too. I've driven Wrynose pass, but probably wouldn't have the courage for Hardknott.
I can't imagine what it must have been like to be a soldier quartered there and am very pleased to hear they had hot baths.

Sounds like a wonderful setting for a Rosemary Sutcliff novel. ;-) I can even think of a bit of the story outline. Hero is sent up there as a punishment for something stupid he did and finds a sullen bunch up there, but they find something really important to do and become close friends by the end of the novel and decide that actually, it's a good place to be... Of course, with no local village it might be hard to include the natives as she usually did.